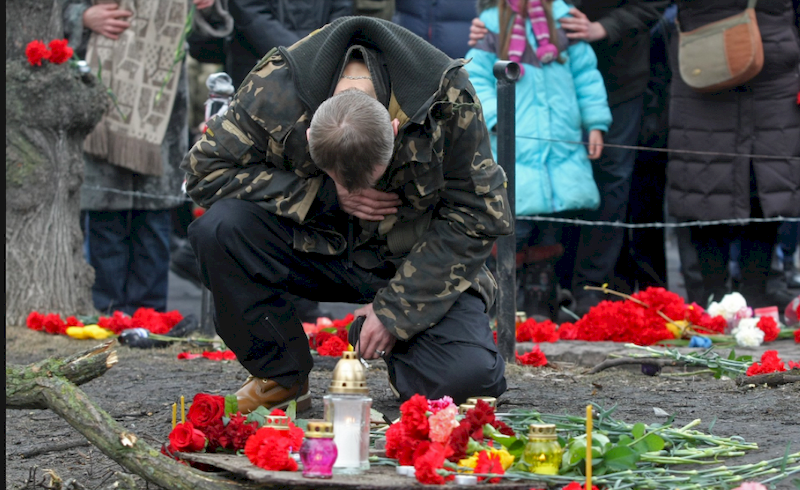 On this fourth anniversary of the bloodiest days of Euromaidan, only one person is serving a real sentence for crimes against Maidan activists, and virtually all of the investigations are facing sabotage.  Euromaidan SOS founder, Oleksandra Matviychuk is not alone in finding the breast-beating pathos and empty promises from Ukraine’s leaders obscene.

The following expands the questions she believes need to be asked. They are only rhetoric if those sabotaging the investigation are not challenged.

Yury Lutsenko, Prosecutor General should be asked directly why, against common sense, he has separated out Maidan cases, taking many away from the single coordinating Special Investigations Department.

It was only after this Department was created at the end of 2014 that any progress was made on Maidan cases, and the prosecutors, under Serhiy Horbatyuk, have cooperated very well with lawyers representing Maidan victims, including the families of Nebesna Sotnya, the over 100 Maidan activists killed.

Lutsenko announced the so-called ‘reorganization’ in October 2016.  All fears that it would hamper progress have been proven correct.

At present cases are under the control of Horbatyuk’s Department; the military prosecutor’s office; the Central Investigation Department, the Department on Crimianl Organizations and the investigative unit of the Prosecutor General’s Office’s Department of International Cooperation.

In fact, one of the cases has been taken back by Horbatyuk and his team after it’s effective sabotage by the military prosecutor.

73-year-old Ludmila Sheremet and 21-year-old Dmytro Pahor were both killed on 19 February 2014, in Khmelnytsky.  It is likely that Ludmila Sheremet was killed by somebody in the SBU [Security Service] building and the fact that the military prosecutor ‘lost’ the crucial evidence – the bullet fired – putting any prosecution in jeopardy is a matter of grave concern  (see Prosecutor ‘loses’ critical evidence regarding Khmelnytsky Maidan killings).

Matviychuk is surely right in demanding an answer from Lutsenko as to why there has been no internal investigation and why nobody has been held accountable.

While Matviychuk is right in saying that you can’t expect justice from judges who themselves passed knowingly wrongful rulings during Maidan – imprisoning people, removing their driving license, etc..  There must, however, be a question over why so few judges have faced any real disciplinary measures.

Just one example:  No penalty against Ukrainian judge who ordered Berkut to disperse Maidan

Matviychuk does note, however, that the High Council of Justice can and should take proper action against the judges who are deliberately dragging out Maidan cases and / or creating the conditions for suspects to flee.  At least two former Berkut officers have been released from custody in circumstances that made it highly likely that they would flee.  Both are now in Russia, with no chance at all of their extradition. No judge has faced anything more than empty threats of an investigation into their motives.

Matviychuk suggests that the Interior Ministry should be asked how many years need to pass before the Ministry finally starts cooperating with the investigators.  A large number of police officers who have been informed they are under suspicion of Maidan-linked crimes remain in their posts.

There is nothing to suggest that an investigation is underway into shocking allegations which would explain why Yury Krysin, one of the men involved in the killing of Maidan journalist Vyacheslav Veremiy, was constantly released from custody and has now received only a suspected sentence.  The allegations concern individuals in the police force and prosecutor’s office, as well as judges, and need to be addressed (See From persecuting Maidan activists to letting their killers go free)

Questions to specific MPs about why they voted for the notorious ‘Lozovy amendment’ to the Criminal Procedure Code would probably be a waste of time.  There must, however, be a question to President Petro Poroshenko as to how much his eloquence about the sacrifices made by those killed and injured on Maidan and the need for proper accountability, if he signs the relevant law into force.

If he does so, he will be ignoring calls from lawyers representing the families of Nebesna Sotnya, and all major human rights organizations in Ukraine.

The Lozovy amendment to the CPC, adopted on October 3 with a small majority (234 votes) restricts the period of pre-trial investigation into grave and especially grave crimes to six months prior to a person being informed of the suspicion and to two months after this.  This amendment is of direct benefit to its author, Andriy Lozovy, whose criminal investigation for tax evasion would be terminated. Serhiy Horbatyuk has said that the amendments will mean that “all proceedings under investigation over crimes against Maidan will need to be terminated after the law comes into force”.

Poroshenko should also be asked why he ignored the Nebesna Sotnya families’ lawyers who pleaded with him not to dissolve the district courts, some of which were examining Maidan cases.  This now means that those cases may  need to be restarted from the very beginning.

Over 130 people lost their lives during Euromaidan, or the Revolution of Dignity.  The vast majority were unarmed protesters.  Four years on, the questions to those blocking a proper investigation and real accountability should not be rhetorical.