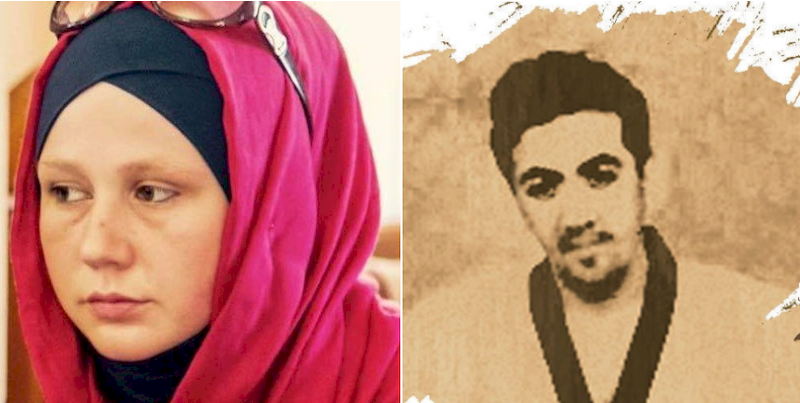 Fera Abdullaeva has been fined by a court in Russian-occupied Crimea for trying to stand where she could see her political prisoner husband Uzeir Abdullaev as he was brought to yet another closed detention hearing on December 8, 2017.  There are no grounds for holding these ‘court’ detention hearings behind closed doors, and none either for the prosecution of the young Crimean Tatar woman.

After months where the only chance wives, parents and the older children of political prisoners had of seeing the men was in court, the occupation regime began preventing even this, with hearings held behind closed doors.  Most members of the family and other Crimean Tatars generally come to the court anyway, hoping to see the men as they’re brought to the court and simply wanting to be there to show support.

Fera Abdullaeva was standing on the landing and had not been obstructing movement in any way when a court official ordered her to move down a floor and then leave the court. When she demurred, explaining that she was not in the way, she was detained and taken away to have an administrative protocol drawn up. The charge was of ‘not complying with the order of a judge or court official on ensuring order in the court’.

The official Sergei Berezko claimed that Abdullaeva had begun making a lot of noise when he told her to move and that she had been in the corridor.  She rejects both claims and points out that since she didn’t even know which room the hearing would be in, there was no way she could have been standing where Berezko asserts.

Berezko’s testimony at the first hearing was garbled and contradictory.  He managed, in the space of two consecutive sentences, to contradict himself on the subject of whether he had seen Fera Abdullaeva before. He then went on to complain that “each time Crimean Tatars come to the court, there are scuffles and complaints from them”.

While complaints are regularly lodged over the illegal closed hearings, the claim about scuffles is manifestly false. With Crimean Tatars regularly prosecuted and fined or even jailed for legal single-person pickets, there would have been multiple prosecutions by now had Berezko been telling the truth.

It is also noteworthy that the first attempt to prosecute Abdullaeva resulted in the court terminating the proceedings for want of an offence.  Berezko, however, objected – or was told to object – and ‘the case’ was sent for a new hearing before a magistrate.  The second time, the magistrate, for all the absurdity of the charge, fined Abdullaeva 500 roubles (a small amount in comparison with many other entirely unwarranted fines).

Two brothers - Uzeir and Teymur Abdullaev have been in custody since October 2016, together with Emil Dzhemadinov; Aider Saledinov and Rustem Ismailov.  Both brothers seem to have received particularly brutal treatment, with Uzeir complaining of torture by the convoy officers bringing the men to ‘court’.

These FSB prosecutions, which bring promotion and other benefits to the officials involved, all follow a standard format. There has to be one ‘organizer’ of a supposed Hizb ut-Tahrir ‘cell’ and several individuals facing the lesser charge of ‘involvement’.  In this case Teymur Abdullaev has been designated ‘organizer’ and could face a sentence of 17 years or more, while the others face from 10 years up.