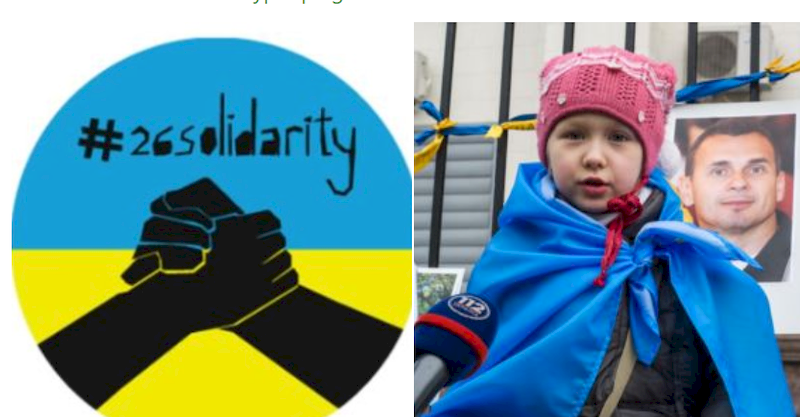 It is four years since a huge pro-Ukrainian unity demonstration in Simferopol on 26 February 2014 foiled Russia’s plans for an illicit coup d’état.  It is an appropriate, yet poignant Day of Crimean Resistance given the huge price paid by the Crimean Tatar leaders and other Ukrainians who peacefully stood in defence of Ukraine on that day and later, after Russian forces and armed paramilitaries seized control of Crimea.  The list is long, but includes Ukrainian filmmaker Oleg Sentsov, human rights defender Emir-Usein Kuku and a number of Crimean Tatars active in the Crimea Solidarity movement which arose to help the ever-increasing number of political prisoners in Crimea and their families.

They and others need our solidarity.

Ukraine’s Centre for Civil Liberty and PEN America have initiated a global event entitled 26 Moments of Solidarity in support of Oleg Sentsov, civic activist Oleksandr Kolchenko and all the other Ukrainians whom Moscow is illegally imprisoning.  In Kyiv, an event will take place outside the Russian embassy at 12.00, but other acts of solidarity are planned also in other cities.

It is hoped that others worldwide will add their events to demonstrate solidarity with men imprisoned for their support for Ukraine, for their faith or because they themselves helped those in need.

Sentsov was honoured with the PEN America / Barbey Freedom to Write Award in 2016, and PEN America will be holding readings, rallies and special events calling to #FreeSentsov on February 26.

In an immensely moving letter in response to the award, Oleg wrote:

“The last time I went to the Maidan, where people had already begun perishing, my mother said, “Why are you going there? You have two children!” I answered that it was precisely because of that that I was going there—I don’t want them to live in a country of slaves. We won then, but it proved not to be the end. And the struggle continues, but now without me. I’m in prison and like any prisoner it is very difficult for me to answer a simple childish question: “Daddy, when are you coming home?”

Oleg’s daughter is 15, his son two years younger.   They have not seen their father since May 2014.

Russia’s invasion and annexation of Crimea were in grave breach of international law and the lawlessness has continued.  Since Russian President Vladimir Putin has claimed that Russia needed to ‘defend’ Crimeans, and there was no evidence that anybody had been in danger, the FSB has since periodically invented ‘terrorism’ or ‘sabotage’ plots.

Sentsov, Oleksandr Kolchenko and two other opponents of annexation – Hennady Afanasyev and Oleksiy Chyrniy – were seized in May 2014.  They were held incommunicado, first in Simferopol, then Moscow for three weeks, almost certainly in order to hide the most obvious torture marks.

Sentsov has spoken of the torture he was subjected to from the outset.  He was told by the FSB that if he didn’t give the ‘testimony ‘ they demanded, that he’d get a 20-year sentence and “rot in prison”.

He was sentenced to 20 years, Kolchenko to 10.  For more details and addresses to write to the men, see:

There is no end to Russia’s violations, even of its own legislation.  The latter prohibits the prosecution of non-Russian citizens for something that happened on another country’s territory.

Crimean Tatar Mejlis leader Akhtem Chiygoz spent almost three years imprisoned on surreal charges related to the pro-Ukraine rally on 26 February 2014.  Although he was finally released in October 2017, seemingly as part of an arrangement with Turkey, five other Crimean Tatars are facing woolly and absurd charges linked with a demonstration over which Russia has no jurisdiction.

A number of Ukrainians have been abducted from Crimea or even Belarus, or illegally arrested in Russia.  In a significant number of cases, there is compelling evidence that the men were tortured.

There are details about other prisoners below.  Please choose one or more, and write to the men.  Telling Moscow that the world is watching, helps keep them safe.

Safe is not enough, however, and your voices and help in passing on the details about their cases to journalists and politicians in your country can help put pressure on Russia to free them.