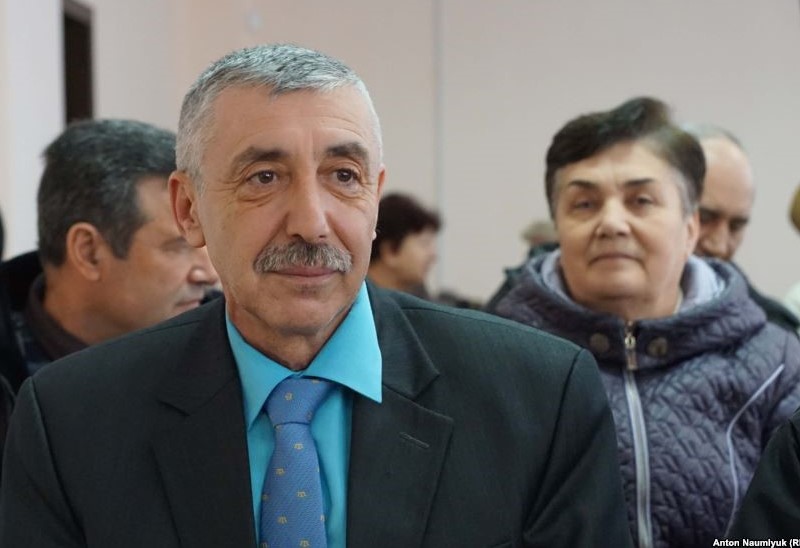 Suleyman Kadyrov has been convicted by a ‘court’ in Russian-occupied Crimea of ‘making public calls to violate Russia’s territorial integrity’  for writing on Facebook that “Crimea is Ukraine.  It always was, is and will be”.   He received a two-year suspended sentence, with a ban on any ‘public activities’ for the same period. The 54-year-old Crimean Tatar is the third Ukrainian, after journalist Mykola Semena and Crimean Tatar Mejlis leader Ilmi Umerov, to be sentenced for expressing the position taken not only by the UN and all democratic countries, but also that in international treaties which Russia has never renounced.

Kadyrov himself said that the sentence was expected.  “This is Russia and its Russian justice system has always been dependent on the security service and always will be.  This is proof that out of fear they label everybody around, fabricating criminal cases to a fixed pattern.  That is true not only of me, but of all political prisoners.  We will go through all stages of this Russia twisted justice and then apply to the European Court of Human Rights”.

During his final address to the ‘court’ on 28 February, Kadyrov reiterated that he had committed no crime and that there was, in fact, no element of a crime in the charges he was facing.

He went on to speak of the social tension which is constantly on the increase in the Russian Federation and how this is inevitable given the poverty and injustice.  Instead of taking measures to deal with real problems, the Russian authorities see ‘extremism’ everywhere and start applying political repression, which has now affected him as well.

“Is it I who annexed Crimea, who bans the Ukrainian and Crimean Tatar languages, who persecutes the unlawfully abducted and imprisons my fellow countrymen on politically motivated charges?

Was it I who came with weapon in hand to Donbas, and for four years have been killing Ukrainians?

Is it I who everyday on Russian TV incites to inter-ethnic enmity and calls for war?

Is it supposed to be my fault that so many families have been deprived of their husbands and fathers jailed in Russian prisons?”

Kadyrov pointed out that the prosecution has produced no evidence of public anger at Kadyrov’s words, or any harm that they were supposed to have caused.

“Before I had no idea about any extremism or terrorism. That came to Crimea four years ago,  I have been declared an extremist, Crimean Tatars terrorists and extremists, for having different views, or simply for observing their faith.“

On 1 March, as anticipated, ‘judge’ Anastasia Shapoval from the Feodosia Court ignored the lack of a ‘crime’ and of any evidence, and declared Suleyman Kadyrov ‘guilty’.

The final words spoken at the earlier political trial of Ilmi Umerov are just as appropriate for Suleyman Kadyrov:

“Those in Crimea who betrayed Ukraine are prosecuting those who did not.

Kadyrov was formally charged in October 2016 weeks after an original visitation by FSB and other enforcement officers, some with machine guns, on October 5.  Kadyrov had been told then that the search was ‘on suspicion of extremism’, with the warrant issued by judge Igor Rodionov over alleged public calls to deny ‘the borders of the Russian Federation’ and support the Crimean Tatar Asker Battalion.

He was charged over a reposted video from ‘Demyan Demyanchenko’, which he accompanied with the commentary: “Suleyman Kadyrov agrees! Crimea is Ukraine.  It always was, is and will be!  Thanks to the author for the video.  I support it”.

In April 2017, well before the trial, Kadyrov became the latest Ukrainian to be added to Russia’s ‘List of Terrorists and Extremists’, with this meaning that the bank account from which he received his pension was blocked, as well as numerous other difficulties on an everyday basis.

Although Kadyrov was prosecuted, like Semena and Umerov, under the same Article 280.1, introduced soon after Russia’s annexation of Crimea and used against those who follow all international structures and democratic countries in saying that Crimea is Ukraine, there was one slight difference.  This time, even the so-called ‘expert assessment’ found no ‘public calls’ in Kadyrov’s words.

The case was just like the others in its use of falsified testimony.  At the court hearing on December 20 eight ‘witnesses for the prosecution’ were questioned.   Although the alleged witnesses were so-called members of the public, the protocols for all the interrogations were identical, down to the last comma.  Two of the so-called search witnesses had already fulfilled an identical task in the trial of Semena.

The sentence will be appealed, but unfortunately Russia did not only bring ‘extremism’ and ‘terrorism’ to Crimea, but also political ‘trials’ whose outcome at all levels is known in advance.