Ukrainian police violently dispersed protesters without any court orderCrimean Tatars sentenced to 18, 17 and 13 years for discussing their faith and Russian persecution Bandera. An Invitation to a Calmer ConversationMass detention of Crimean Tatars travelling to political trial in Russia A brief description of the KHPG strategic litigations in July–December 2020Russia seeks to imprison three Crimean Tatars for 50 years on thought crime chargesThe practice of application of Article 111 of the Criminal Code of UkraineCriminal proceedings under Article 111 of CC of Ukraine against the journalistsRussian-installed Crimean leader praises FSB for terrorizing Crimean TatarsBelarus: Savage attack and possible 3-year sentences against journalists reporting March against TerrorBelarus threatens to use lethal force against protesters as pensioners march for freedomAcquittal and monstrous sentences in Russia’s offensive against Crimean Tatar civic journalists & activistsKyiv court upholds ex-Yanukovych aide’s attack on anti-corruption investigative journalistsPolice refuse to react to threats against journalist who exposed pro-Russian Telegram sway over Ukraine’s legislatorsLukashenko regime’s savagery may be backfiring in BelarusBelarus: ‘I appeal to all Europe: Please help us, because they’re killing my family’A brief description of the KHPG strategic litigations in January – June 2020Belarus: Peaceful protester killed in violent crackdown after claimed Lukashenko victoryRussian activist faces criminal charges for picket with a flag of Ukraine in support of Crimean TatarsMH17 and the weapons of death that Russia is still bringing to Ukraine
• Topics / Freedom of expression
• Topics / Law enforcement agencies 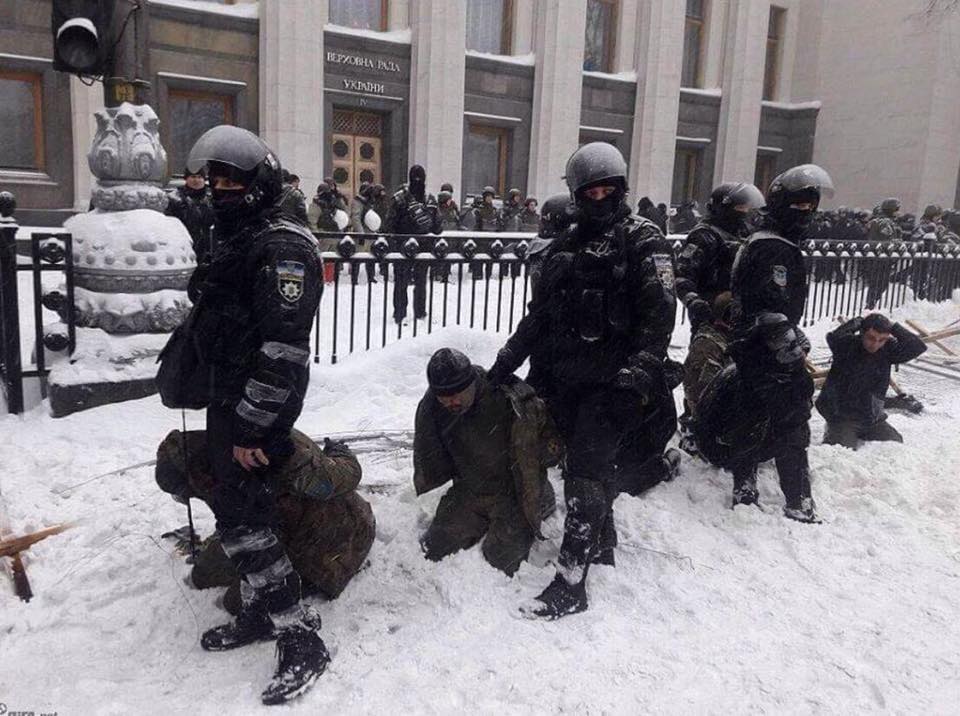 .One journalist was hospitalized with chemical burns after the dispersal on March 3 by Ukraine’s ‘new police’ of the protest camps outside parliament.  Two other members of the press also complain of ill-treatment from officers in helmets, who they say were not wearing any insignia to enable individual identification.   In its statement issued soon after the attacks, the Institute for Mass Information demanded a full investigation into all cases of violence with those responsible held to answer.  It noted that “it has been a long time since spetsnaz officers attacked journalists with professional video camerals and ID”, and called for a change to the system for identifying individual spetsnaz officers.

The tent camp had been set up back in October 2017, seemingly by supporters of Mikheil Saakashvili, with the protesters totally blocking the road and saying that they would remain until an anti-corruption court was created, open voting lists were introduced and MPs’ immunity removed.  Soon afterwards they added a further demand, namely President Petro Poroshenko’s impeachment.

This was no Maidan, and the protesters had fairly limited support.  According to Liga.net, even Saakashvili’s Movement of New Forces distanced themselves from the protest after conflict on 27 February 2018 which left over ten police officers injured.

Concern was, however, expressed by many former Maidan activists on Saturday over the scenes outside the Verkhovna Rada as the tents were dispersed by the police and National Guard, and over 100 people (fairly briefly) detained.  Most now have ‘witness’ status, and there appear to be criminal investigations underway over the clashes on February 17, and an alleged attempt in December to seize the October Palace building near Maidan Nezalezhnosti [Independence Square].  Kyiv Post quotes a lawyer representing the people detained as asserting that the measures had been unlawful without a court order, and that the use of force had been excessive.  Prosecutor General Yury Lutsenko has justified the dispersal, and asserts that the protesters had weapons and explosives, a claim denied by the activists.

Artem Shevchenko, spokesperson for the police, dismissed widespread criticism of the police’s methods in forcing the protesters to kneel (on snow-covered ground).  He claims that this is standard practice by spetsnaz officers in different countries, and that the pose had been chosen to avoid men being forced to lie on the cold ground.

The Ukrainian Helsinki Human Rights Union and Kharkiv Human Rights Group noted that journalists and observers had filmed the entire operation, involving over 600 police officers and members of the National Guard. 13 protesters were injured, and 7 police officers, and it is essential that such footage is used to determine the circumstances under which the injuries were sustained, who gave the orders on both sides. An investigation must also decide whether the actions of the enforcement officers were lawful and how proportionate their use of force.  The situation is not simple or one-sided, they say, and they stress the need for maximum transparency.

Whether or not the overall operation was carried out in lawful fashion may be in dispute, but not so the brutal treatment of three journalists.

An investigation under Article 171 of Ukraine’s Criminal Code (obstruction of a journalist carrying out his or her work) has been initiated with the SBU [Ukrainian Security Service] in charge, and the prosecutor’s office overseeing it.

This, it should be said, is what standardly happens when there is a lot of media coverage of an incident involving a journalist.  Such investigations very often ‘find no wrongdoing’.

In this case, Nuzhnenko is adamant that he had his Press ID in front of him and that a police officer came up from behind and sprayed the contents of a pepper spray can in his face.

Bohdan Kutiepov from Hromadske, and Vlad Krasinsky from Insider also assert that force was used against them by police officers.

Kutiepov reports being kicked by a police officer, who told him in extremely foul language to get out.  He provided a photo of the ‘cosmonaut’ he alleges kicked him, and certainly from this it is hard to see any visible ID.

The police, it should be said, have denied that any of the men were without ID, and certainly the officer photographed here does have an identifying number on his helmet..

Kutiepov later reported, posting a video of the events, that he had been the only journalist who was wearing an orange jacket with the word PRESS in large letters on the back.  Rather than helping, this had been the source of constant harassment from the police who kept trying to drive him away, and stop him from filming.

Krasinsky’s account is not dissimilar.  He says that he was approached by an officer who, despite his press ID, camera and telephone, demanded to know who he was and what he was doing.  The officer then poked his gas canister at Krasinsky, before he and another officer used their shield to push him up to the barricade.  He notes that officers had used the same spray can against Nuzhnenko without any preamble.

In commenting on these incidents, Serhiy Tomilenko, the head of Ukraine’s National Journalist Association, said that he and colleagues had just yesterday been discussing impunity against attacks.  They had expressed anger that the Interior Ministry and National Police were not read to publicly report on the progress (or otherwise) of investigations into crimes against journalists.  Yet what will you expect from such a report, he asks “if the enforcement officers themselves are the source of danger for journalists!”