Ukraine is putting persecuted journalist’s life in dangerAzerbaijan opposition blogger illegally deported from Ukraine despite ECHR rulingPetition regarding the ongoing failure to allow Azerbaijani journalist Fikret Huseynli to leave UkraineRussia’s remake trial of Crimean Tatar Mejlis leader provides evidence for international courts Will anyone answer for the killings on Maidan?Ukraine takes vital step towards trial in absentia of suspected Maidan mass killersTrial of Crimean Tatar Mejlis leader exposes Russian lies about invasion of CrimeaUkraine was supposed to help Russia persecute Crimean Tatar leader Mustafa DzhemilevRussia has no problem with the torture and killing of a 16-year-old Ukrainian schoolboyAttempt on the life of ex-hostage tortured for her pro-Ukraine stand in Russian proxy Donetsk ‘republic’Russia protects and gives lucrative employment to torturer and killer of Ukrainian schoolboyOpposition journalist facing political persecution is in danger of extradition from Ukraine to KazakhstanRussia’s most toxic ‘Odesa Massacre’ lie and the help Ukraine is giving itInterpol cancels search for key Odesa 2 May 2014 suspect who was helped to flee justiceSombre Anniversary with hopes of justice for Maidan victims waningTwo suspected Maidan killers return to Ukraine, claiming they’re victims of persecutionAccountability for international crimes committed in Ukraine between 2014–2018Ukraine will be in direct violation of international law if it extradites Kazakh opposition journalist Zhanara AkhmetUkraine’s SBU must not help Russia persecute an asylum-seekerSavagely tortured to death for the Ukrainian flag in Russian-occupied Crimea and Donbas
• Topics / Freedom of expression
• Topics / On refugees 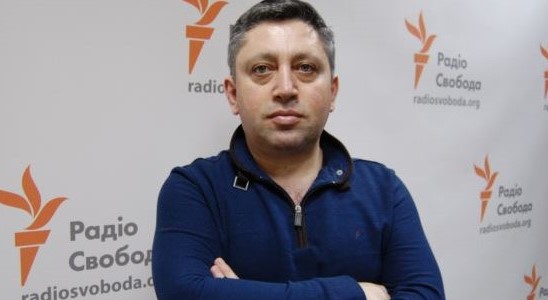 An attempt was made in Kyiv on March 5 to detain Fikret Huseynli, a journalist working in exile for an opposition channel, and facing a baffling ‘extradition check’ in Ukraine.  Huseynli received political asylum and later citizenship in Holland and there is no way that Ukraine can legally extradite him to Azerbaijan.  The events on 5 March, however, compound concern that an attempt could be made to abduct him, and hand him over to the Azerbaijani authorities.

Huseynli later explained to the Human Rights Information that he had sensed that he was being watched all of that day, and when he returned home at around 23.00, four men came up to him.

“They said that they wanted to detain him as supposedly being on the Interpol database, and that they had to take him to the police station. They said that there was a ruling on extraditing him to Azerbaijan.  They did not identify themselves, and I had not seen them before”.

He had spoken with them first with the front door closed, but opened it after they tried to break it down.  As he opened the door, he was hit in the stomach, left leg and right arm, and they also tried to suffocate him.

He explains that neighbours intervened, calling the owner of the flat, at which point the four men said that they would wait for him in the car.  He was able to escape at that point.

The original report from TV Turan, citing Azerbaijanis living in Kyiv, stated that some of the individuals spoke Azeri.

Huseynli, unfortunately, has every reason to regret having come to Ukraine to launch a Ukrainian office for the opposition satellite TV channel Turan in the autumn of 2017.  He was detained on October 14 at Kyiv’s Boryspil Airport as he tried to leave the country, because an Interpol Red Notice had been issued at Azerbaijan’s request.  He told colleagues back then that he feared an attempt to abduct him, and said that there had been a number of Azerbaijani officials at the airport.

He was freed from detention on 27 October, after MP and former journalist Mykola Knyazhytsky and Boris Zakharov from the Ukrainian Helsinki Human Rights Union, offered to act as guarantors.

The Kyiv Regional Prosecutor initially lodged an appeal against Huseynli, but then withdrew it, however the journalist has had his passport taken away while the request for his extradition to Azerbaijan is processed.

At the end of February, Huseynli explained that, thanks to Dutch diplomatic efforts,  Interpol had deleted his name from their list of wanted people back on 13 November 2017.  This had been the stated reason for his detention in Ukraine, yet five months on the Ukrainian authorities were doing nothing, and he remained without a passport.  In response to a formal request for information from Radio Svoboda, the Prosecutor  General’s Office asserted that a check was underway in response to an extradition request from their counterpart in Azerbaijan.  They said that they had received a second letter from Azerbaijan with further details of the charges they want to bring against him.

Huseynli worked in Azerbaijan for an opposition newspaper Azadlir [Liberty].  He was abducted and assaulted by masked men in March 2006, receiving knife wounds and other serious injuries.  He left Azerbaijan on 8 May 2008, and was granted political asylum in the Netherlands.  Two years ago, he received Dutch citizenship.

At least one of the reported charges against the journalist seems are of having organized emigration of Azerbaijanis in order to receive refugee status abroad .  He is also accused of fraud, with the authorities claiming that he received two thousand EUR from a couple with two children for a document which was supposed to get them permanent residence in Hungary.

Even if the charges seemed more substantial, it is almost 10 years since Huseynli lived in Azerbaijan.  While it is just conceivable that new information might have come to light after Huseynli applied for and gained political asylum in the Netherlands, this should be presented to the Dutch authorities.

Instead, Azerbaijan used Interpol to get him taken prisoner in Ukraine, probably hoping to find the Ukrainian authorities more obliging.

In February 2018, the Human Rights Information Centre made public a letter they had received a copy of sent from the Azerbaijan Prosecutor General to his Ukrainian counterpart, Yury Lutsenko.

The letter from 18 January 2018 claimed that Huseynli had come to Ukraine to destabilize the country, that he was taking part in political rallies, etc. which are against Ukraine’s national interests.  The winning card in this letter was presumably supposed to be a photo showing Huseynli with ex-Georgian President, former governor of the Odesa oblast and fierce critic of Ukraine’s President Petro Poroshenko.

Whatever our opinion of this controversial politician, the authorities’ behaviour with respect both to Saakashvili, and to his associates has on many occasions aroused serious concern about violations of their rights, and breach of Ukrainian law.

Any attempt to extradite Huseynli when there are grounds for believing the charges to be linked with his opposition activities and when he holds Dutch citizenship would also be in breach of Ukrainian law and international commitments.

Forcibly holding him in Ukraine in the knowledge that it will be easier to abduct him would be no better.

Since Ukraine’s police deny having tried to detain Huseynli, Boris Zakharov suggests that the journalist turn to them for protection.  This would mean that any subsequent abduction would be firmly their responsibility.

Huseynli is one of three journalists from ex-Soviet republics who are currently facing extradition checks.  Zhanara Akhmet from Kazakhstan was also taken into custody in the late evening in circumstances that made it unclear whether detention or abduction was planned.  It took considerable effort to get both Akhmet and Uzbek journalist and poet Narzullo Akhunjonov released from custody, despite the fact that the charges against them seem politically motivated and the real danger of persecution if forcibly returned.