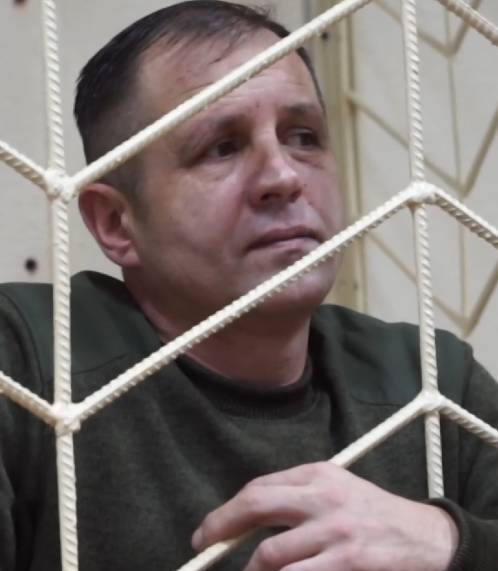 Volodymyr Balukh has declared an indefinite hunger strike in protest at the three and a half year sentence on grossly falsified charges imposed by a ‘court’ in Russian-occupied Crimea.  Balukh was imprisoned just days after he placed a plaque on his home in memory of slain Euromaidan activists and had faced a string of absurd prosecutions and threats in connection with the Ukrainian flag he refused to remove from the roof of his home.

The conditions in detention in Simferopol are appalling, and 46-year-old Balukh’s health has seriously deteriorated as a direct consequence.  He has been moved to a solitary confinement cell while on hunger strike, however a ‘court hearing’ is due on 19 March in connection with new criminal proceedings.  These were brought in August 2018  after Balukh complained about anti-Ukrainian abuse and physical violence from the head of the Razdolne detention centre Captain Valery Tkachenko.

Two weeks after Balukh’s lawyer lodged a complaint about Tkachenko’s behaviour in hitting Balukh, and insulting him for his Ukrainian nationality, Tkachenko came up with his own version of events.  Balukh, it was claimed, had hit Tkachenko in the stomach with his elbow.  He was then alleged to have gone into cell No. 2, taken a bottle of cleaning liquid and again hit Tkachenko on the right arm.

Olga Dinze, Balukh’s lawyer, had pointed out when lodging the complaint that the CCTV footage from the police holding unit confirmed Balukh’s account of the events.  In politically motivated cases, such details are ignored, and the Russian ‘Investigative Committee’ chose to believe Tkachenko’s belated counter-claim.   The court hearing on 19 March under ‘judge’ Tatyana Vasilyevna Pyrkalo is on choosing a ‘restraint measure’ which is in itself absurd, given that Balukh has been imprisoned or, briefly, under house arrest for the last 16 months.

The timing was another indicator of the political nature of this case.  Balukh was arrested nine days after he nailed a plaque renaming his home No. 18 “Heroes of Nebesna Sotnya St’ in memory of the over 100 Maidan activists who were killed during Euromaidan.  He rejected demands from the head of the local council to remove it.

The ammunition which the men, wandering in some unclear capacity around the Balukh home, allegedly found, had no fingerprints or other traces to indicate that any member of the family had touched them.  Most important, the ammunition in question was on the official register of weapons and ammunition in Barnaul, the Altai region of the Russian Federation, and was produced back in 1989.   Neither Balukh nor his common-law wife, Natalya, had been allowed to see what was going on, with the officer who effectively held Balukh prisoner during the ‘search’ unable to give a sensible reason for doing so.

Balukh was initially sentenced by ‘judge’ Maria Bedritskaya from the Razdolne District Court to three years and seven months’ imprisonment in a low-security prison colony, as well as a 10 thousand rouble fine, on 4 August 2017.  During the appeal hearing on October 2, the High Court in occupied Crimea revoked the sentence, having accepted the submission from the defence Bedritskaya should not have been the judge, as she had been involved in earlier (equally flawed) cases against Balukh.

Although this was to prove a mere technicality, it did enable the defence to secure Balukh’s release under house arrest in December, since he had by then already been in detention for a year.  Balukh was taken back into custody after the sentence was announced on January 16, 2018.

The supposed ‘retrial’ took place in the same Razdolne District Court, but under ‘judge’ Yelena Tedeyeva.  She proved just as willing as her colleague  to ignore the evidence that the charges of possessing ammunition and an explosive substance were rigged.  In fact, the trial was marginally more farcical than the first, with Tedeyeva showing no interest in even ensuring that the supposed ‘witnesses’ even appeared in court.   As with Bedritskaya, it was clear that orders had been issued which the ‘judges’ found no problem with obeying.

The second sentence was identical to the first – three years, and seven months’ imprisonment and the same fine.  The conviction was upheld during an insultingly short appeal hearing on March 16, with the sentence only reduced by two months.

While the new charges are grotesque, they may at least prevent Balukh being illegally sent to a prison colony in Russia.  Volodymyr’s mother, Natalya Balukh, is 76 years old, nearly blind and not in a state to tend to their farm alone.  Members of the Crimean Tatar national movement, other Ukrainians visit her and help where they can, but she desperately needs her son home.