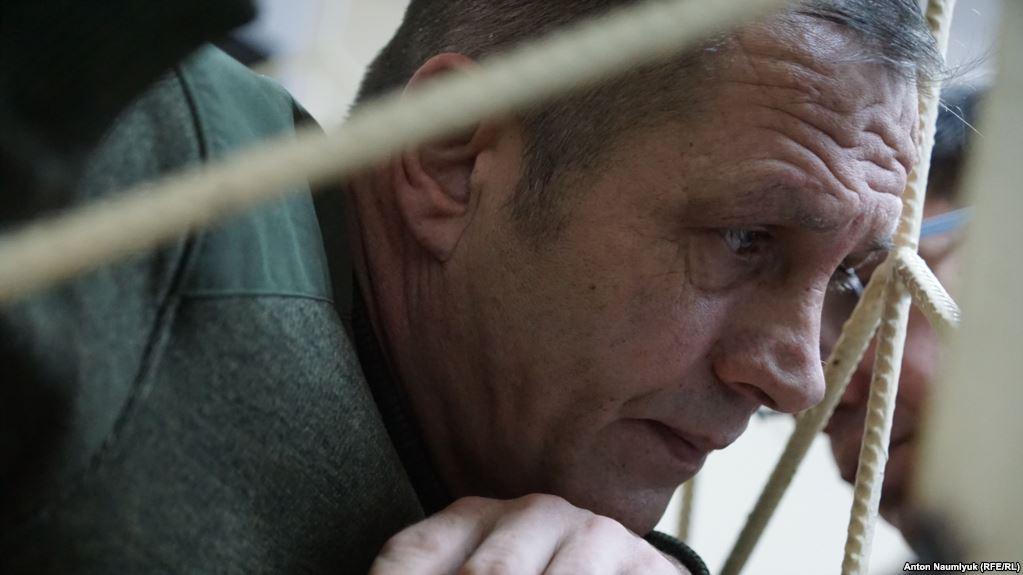 Almost two weeks after Ukrainian patriot and political prisoner Volodymyr Balukh went on hunger strike in Russian-occupied Crimea, his lawyer has only just been able to see him.  She reports that he is looking thin and gaunt, and that the SIZO [remand prison] staff are putting pressure on him to end his hunger strike.  The Russian-controlled authorities have also blocked any access to him, and it remains to be seen whether the Russian Human Rights Ombudsman will respond to her Ukrainian counterpart Lyudmilla Denisova’s request that doctors examine him.

47-year-old Balukh declared hunger strike on 19 March in protest at his two-and-a-half year prison sentence on grossly fabricated charges after he refused to conceal his pro-Ukrainian position.  Aside from a brief period under house arrest, he has been imprisoned since 8 December 2016, and there have been repeated concerns about his state of health.

Balukh is imprisoned in Simferopol, a fair distance from his home in Razdolne, making it effectively impossible for his elderly mother, who is in very bad health, to visit him.  She is very distressed and fears that she will never see her son again.  Balukh’s wife, with whom he was living when arrested, is also being prevented from seeing him on the grounds that they are formally divorced.

Balukh was arrested on Dec 8, 2016, nine days after he nailed a plaque renaming his home No. 18 “Heroes of Nebesna Sotnya St’ in memory of the over 100 Maidan activists who were killed during Euromaidan.  He had rejected demands from the head of the local council to remove it.

During a grossly irregular ‘search’ of his home,  90 bullets and several trotyl explosive devices were allegedly ‘found’ in his attic.  He had no record of violence and the constant searches and series of administrative prosecutions he had faced since Russia’s invasion of Crimea for his openly pro-Ukrainian position made it inconceivable that he could have held anything illegal in his home.

The implausibility of the charges was just one of several compelling reasons why the renowned Memorial Human Rights Centre declared him a political prisoner well before the trial.

There had been an almost unconcealed level of falsification in this case.  The officer who had supposedly found the ammunition had not been on duty that day and could not name the individuals who had instructed him to be present or their position in the law enforcement bodies. He also had no explanation for why he had also climbed onto the roof and removed the Ukrainian flag flying there.

During the appeal hearing on October 2, the High Court in occupied Crimea had revoked the sentence, having accepted the submission from lawyer Olga Dinze that Maria Bedritskaya should not have been the judge, as she had been involved in earlier (equally flawed) cases against Balukh.

During his final address on August 1, Balukh pointed out that there was in fact no criminal case, only a farce acted out by those instructed to play it to the end. His words were essentially a message for all Ukrainians and any person confronted with the possibility of retaining his liberty by betraying his principles and acting against his conscience.

“What is happening with me is a vivid example of how the state machine works.  Nothing is sacred, no legal arguments, nothing has any effect on it, and it’s all according to the will of one or several people.  This is the first reason why I’m here. The second reason is my love for my Homeland, for everything that I am made of, my nationality, my memory of my forebears, all of them whom I know. They were Ukrainians, worthy people preserving their traditions. That was how we were raised by our mother and father. My Homeland is for me the same as my mother, my family, my children.

… I had a choice. If I had gone against my own conscience, forgotten my principles, it would have been enough to say I was guilty, become morally broken in order to avoid prison. And that individual sitting opposite me, he wouldn’t have demanded five years and a month, but some two or three years, maybe a suspended sentence, just give in.

Well, I don’t want life on earth to end, I don’t want my descendants, by that I mean the children of all Ukraine to one day reproach me for having been cowardly, shown weakness. Yes, there were objective reasons, nobody wants to go through what I’m experiencing now.  You can understand any person, but I have nonetheless lived the best years of my life, and at my age I can’t afford to show cowardice. Therefore what will happen, will happen.

Volodymyr’s address can be heard in full here