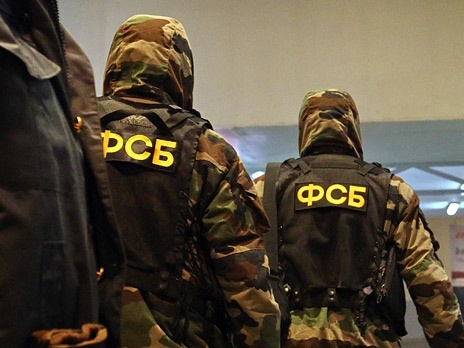 The identity remains unclear of a 24-year-old Crimean arrested on 20 March for alleged involvement in non-existent military action by a Crimean Tatar volunteer battalion. It seems likely, however, that there will be more such arrests, with Russia openly targeting Crimeans involved in defending Ukraine in Donbas, and mentioning other charges earlier used in propaganda against exiled Crimean Tatar leaders and Crimean Muslims.

Further repression against Crimean Tatars was widely expected after the vast majority of them boycotted the presidential elections which Russia illegally held in Crimea.  It was therefore no surprise when pro-Kremlin Crimean and Russian media all reported the arrest on 20 March of a Crimean whom the FSB claimed had “taken an active part in military action aimed at changing the constitutional order and violating Russia’s territorial integrity”.  This unnamed 24-year-old was alleged to have done by belonging to the Noman Çelebicihan Crimean Tatar volunteer battalion.  It may or may not be relevant that the reports coincided with another on 20 March about the supposed discovery of a hiding place with arms and ammunition in the Ai Petri Canyon.

The reported arrest of a battalion member was undoubtedly aimed at suggesting that this Crimean Tatar battalion was a danger (and that its members might be lurking in Crimea).  This was typically misleading.  Although such a battalion has been formed out of the Asker civic formation which has taken part in implementing the civic blockade of Crimea, the battalion itself is not yet part of the Ukrainian armed forces, and is not involved in any military action.

Nor is there any evidence of its engagement in acts of sabotage in Crimea, though that did not stop the same pro-Kremlin media as reporting the arrest of a ‘saboteur’ and member of the ‘Asker Battalion’ back in February 2017.  19-year-old Seit-Ibraim Zaitullaev had been a member of the Asker civic formation monitoring the blockade, but had left two months before his seizure, with Asker colleagues saying that he was still just a lad who had been pining for his family.

The exercise then seems to have been aimed at pushing the idea that Asker was involved in sabotage and terrorism..  Zaitullaev was asserted to have “admitted to having been part of a Crimean Tatar battalion which trained specialists for sabotage in Crimea” for over a year.  The FSB produced the customary video (with a TV channel’s microphone!) in which the young man talks of training in carrying out terrorist acts, sabotage and intelligence, with these acts of sabotage planned also at the border crossing.  Later, the state-controlled Rossiya-24 produced an account in which Zaitullaev allegedly spoke of members of Hizb ut-Tahrir serving in the battalion and recruiting suicide bombers for the border crossing in Dzhankoy.

Any critical reader could have understood that this was absurd simply from the fact that Zaitullaev was himself accused only of ‘illegally crossing the border’ and no other arrests followed.  The whole exercise served to echo the narrative in the Russian media about Crimean Tatar opponents of Russian occupation and about the Asker civic formation.  It was, perhaps most cynically, used to try to justify Russia’s imprisonment and huge sentences against Crimean Muslims for alleged involvement in Hizb ut-Tahrir, a peaceful organization which is legal in Ukraine.  It is unclear what methods were used to extract Zaitullaev’s ‘confession’ and baseless accusations, though many other Ukrainians who gave similarly ‘televised confessions’ have confirmed that these were tortured out of them.

Zaitullaev was imprisoned briefly and then fined, with nothing further ensuing from all the alarming stories. It remains to be seen whether the person arrested on 20 March will be identified and put on trial, or whether the FSB will prefer to not be challenged to demonstrate what ‘military action’ he is supposed to have taken part in.

There are, unfortunately, other options for persecution.  Two were listed in a report from the Russian-installed ‘Crimean interior minister, Sergei Abisov on 30 March 2018.  Announcing that ‘countering extremism is a priority’ of the law enforcement body, he stated that the latter were carrying out “investigative and search activities and prophylactic measurs aimed at identifying residents of Crimea who have taken part in the activities of illegally armed formations in the Northern Caucuses during counter-terrorist operations, in armed action in Syria as part of the Islamic State, as well as in armed action as part of the Ukrainian National Guard”.

Attempts to link Crimean Tatars opposing Russia’s occupation of Crimea with the Islamic State began soon after annexation, and intensified with the civic blockade, which was initiated by exiled Crimean Tatar leaders. In October 2015, it was claimed that the world-renowned veteran Crimean Tatar leader and former Soviet political prisoner Mustafa Dzhemilev was recruiting ‘radicals’ for the Islamic State, encouraging Crimean Muslims to take part in order to “later use their military experience for subversive activities in Crimea”.

Attempts over recent years to claim that the many Crimean Tatar victims of enforced disappearances under Russian occupation had in fact joined IS are only one of many reasons for viewing with scepticism the claim that 101 Crimeans have been identified as having gone to Syria to fight for the so-called Islamic State.

Up till now, such claims have been for propaganda purposes. Both the announced arrest of an alleged member of the ‘Crimean Tatar battalion’ and the 30 March report suggest that the situation could become much worse.  The 24-year-old arrested on 20 March is facing charges under Article 208 § 2 of Russia’s criminal code (participation in an armed formation not envisaged by federal law, as well as participation on territory of a foreign state in an armed formation not envisaged by the legislation of that state, for purposes conflicting with the interests of the Russian Federation.  This can carry a sentence of up to 15 years.

Although the said Crimean Tatar Battalion is not officially registered in Ukraine, it hardly constitutes an ‘illegal armed formation’.  One of the reasons, however, for the FSB’s reticence in identifying the man may be that they are forcing supposed ‘confessions’ out of him, which can then be used against others as well.

Russia has considerable experience of fabricating charges under this and other ‘terrorist’ articles, especially against people from Chechnya, Ingushetia, Dagestan and other republics within the Russian Federation. There are countless examples of abuse. including many where Russia has used INTERPOL Red Notices against Russian citizens living in Ukraine (asylum-seeker Shakhban Isakov;  Ruslan Meyriev, and others).   It is frequently claimed that people who fled to countries like Turkey to escape persecution were in fact fighting for the Islamic State, with the courts seldom demanding any hard proof.  As Oleksandr Sedov from the Crimean Human Rights Group warns, “they can accuse anybody they like”.

The most cynically unlawful use of charges under Article 208 would be if Russia tries to prosecute the 218 Crimeans whom the reports says have taken part on Ukraine’s side in the fighting in Donbas.  Although no names were given, Crimeans forced to flee their homeland who have chosen to defend Ukraine in Donbas see no cause to conceal their actions.

Krym.Realii spoke with several men, including Crimean Tatar Veldar Shukurdzhiyev, whose persecution for his role in the Ukrainian Cultural Centre was reported earlier.  After finding a new home for his family, he joined the Ukrainian Armed Forces.

“In Crimea they can view participation of Crimeans in ATO [the term until recently used for the military conflict in Donbas) as they wish. The fact is that we are defending Ukraine’s territorial integrity.  I vowed allegiance to the people of Ukraine and am a Ukrainian citizen”.

Serhiy Vykarchuk has the same position.

“I am a citizen of Ukraine, a Crimean Ukrainian. Crimea is under occupation and it is the Russian regime that is to blame for this. I am proud of who I am. I vowed allegiance to the people of Ukraine. I have given no vow to any other people or state.”

All of those whom Krym.Realii spoke with understand that the road home for them must remain closed while Crimea remains under Russian occupation.  Shukurdzhiyev believes that the reported hunt for Crimeans involved in the conflict in Donbas is “an attempt to intimidate active Crimeans”.

Human rights activists have long warned Ukrainians of the danger of visiting occupied Crimea.  It is now clear that any Crimeans or other Ukrainians who have had any involvement in the events in Donbas, even as volunteers, should be considered a group at risk.  It is even harder for Crimeans to protect themselves. As Sedov points out,  “it’s enough to travel abroad for them to claim that you were in Syria.”