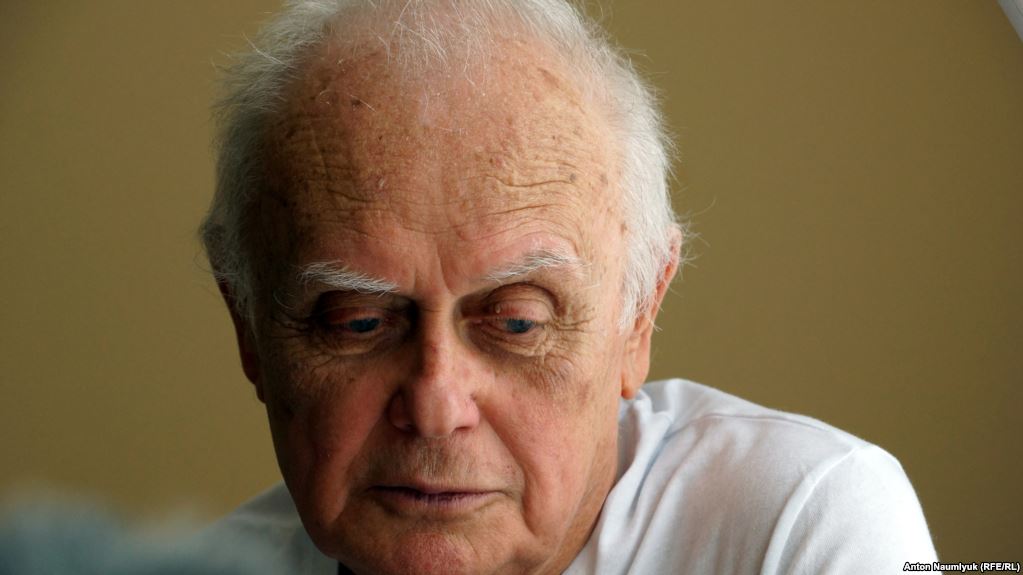 Yuri Soloshenko, Ukrainian pensioner and one of the first hostages of Russia’s undeclared war against Ukraine, has died less than two years after his release from Russian captivity.  He would have turned 76 next month, and was only released in a Kremlin exchange because he had been diagnosed with cancer.  In his first address after returning to Ukraine, Yuri Danylovych spoke of his joy to be home and called for maximum efforts to ensure that all Ukrainians held illegally in Russian prison could also be freed.  He himself was thankfully able to spend his last years with his two sons and grandchildren in his native Poltava.

Yuri Soloshenko was seized in Moscow in August 2014, after arriving for a meeting with a former colleague.  He had been the director of the long-bankrupt Poltava-based Znamya factory which had once specialized in high-frequency electro vacuum lamps used in anti-aircraft warfare.  The factory had always depended for its survival on orders from Russia, meaning that there had been nothing secret between the two countries.

This did not stop Russia from concocting ‘spying’ charges against the then 72-year-old pensioner.  He was held virtually incommunicado in Moscow’s Lefortovo Prison for the next 14 months.  Nothing was known of the charges, and Ivan Pavlov, the prominent human rights lawyer whom Soloshenko and his family had signed an agreement with, was systematically and illegally prevented from seeing him.

He was visited in prison by Russian human rights activist Zoya Svetova who wrote back in April 2015 that in all her years of visiting remand prisoners, she had never seen such flagrant violation of Russia’s Constitution as in the case of Yuri Soloshenko.

Soloshenko had emphatically denied any ‘spying’ or illegal activities from the outset and this would certainly have been the position taken in court had he not illegally been deprived of proper legal defence.  Having blocked access to the lawyer of his choice, the FSB then used a state-appointed lawyer Gennady Blokhin to convince Soloshenko to ‘confess’ to the charges.  He was almost certainly assured that this would mean that he would be able to return home.

Instead, during a closed trial in October 2015, the 73-year-old pensioner with no access to state secrets or Russian weapons was sentenced to 6 years’ imprisonment in a maximum security prison.  The prosecutor had demanded 10 years, so the shorter sentence passed by Moscow City Court Judge Andrei Rasnovsky was presumably in connection with Soloshenko’s age at the time of this ‘trial’.

The FSB had claimed that Soloshenko had been arrested “when trying to illegally purchase secret components for S-300 surface to air missile systems. He was acting on behalf of the State enterprise “Generator Factory” and the “Skies of Ukraine” Corporation, and the items which were to be bought were intended for reinstating Ukraine’s air defence system”.

It was not only his son who called the charges insane nonsense.  Most distressingly, it seems likely that Soloshenko was tricked into coming to Moscow, with the former colleague having collaborated with the FSB.

In a moving reply to a letter Yuri Danylovych received while in prison, he wrote of his longing for his Ukrainian homeland, his love of every blade of grass, every leaf, and his horror at a Russian justice system which is lavish with long prison sentences, with many, like him, totally innocent.  He was responding to words about Spring, which he said was always his favourite season perhaps because he was born in May.  “I look at the bright Spring sun through the window grating and feel an aching pain that I am spending yet another Spring in prison when so few in any case remain”.

He was released finally in June 2016, together with Gennady Afanasyev (one of the opponents of Russia’s annexation of Crimea arrested with Ukrainian filmmaker Oleg Sentsov).