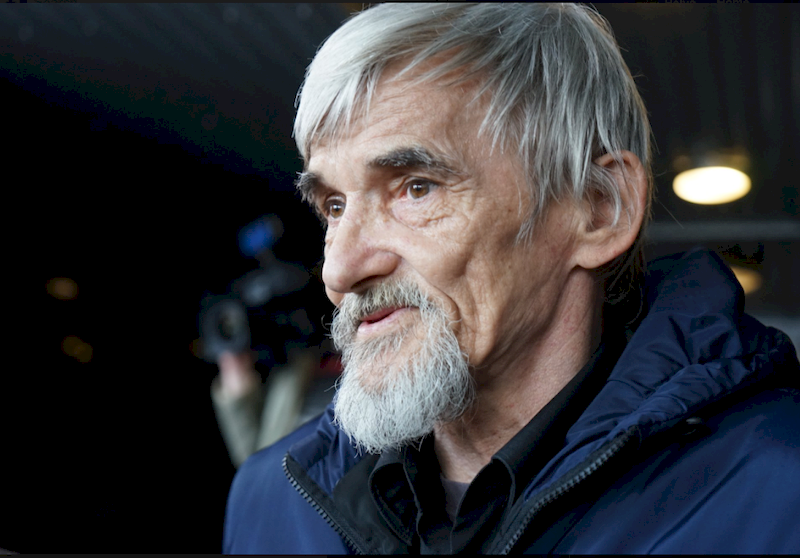 In a step back from the brink, a court in Russia has acquitted renowned historian Yuri Dmitriev of manifestly absurd charges for which the prosecutor had demanded a nine-year maximum security prison sentence.  62-year-old Dmitriev was convicted of a third charge, with the two-and-a-half year restriction of liberty sentence almost cancelled out by the 13 months he was held in detention.

Dmitriev had long been recognized as a political prisoner, with his imprisonment condemned by prominent cultural and academic figures in Russia and throughout the world.  Although the defence had never expressed any criticism of Judge Marina Nosova,, nobody seriously believes that it was she who took the decision to back down on this trial.

Although anything but an acquittal would have looked strange after recognized specialists and the second and third assessments ordered by the court all dismissed the charges against Dmitriev, such weighty reasons have not deterred Russian courts from passing grotesquely long sentences against Ukrainian political prisoners, like filmmaker Oleg Sentsov and others.  Nor, unfortunately, have domestic and international attention, although that too doubtless helped.

On the eve of the verdict, Dmitriev told New Times that it remained a mystery to him who had ordered this prosecution, which was allegedly initiated because of an anonymous letter.

The use of an anonymous denunciation was only one of several ominous echoes of the Soviet repressive machine.  Another was the use of criminal, rather than obviously politically-motivated charges aimed at sullying Dmitriev’s reputation.  Dmitriev is not only a well-known historian of Soviet crimes, but also the Head of the Karelia branch of the Memorial Society, and there was a major media effort at the beginning to try to discredit both him and Memorial.

As reported, Yuri Dmitriev was arrested on 13 December 2016 and charged with ‘preparing pornography involving a minor’ (Article 242.2 of Russia’s criminal code) and ‘depraved actions with respect to a child under the age of 11’ (Article 135).

The charges pertained solely to a folder filed on his computer, and never ‘circulated’, which contained 114 photos of his adopted daughter Natasha.  The photos had been taken from when the little girl was taken from a children’s home at the age of three, very thin and in poor health.  The authorities had themselves advised him to monitor her development, which Dmitriev did scrupulously.  Each of the photos, taken between 2008 and 2015 (when Dmitriev decided there were no longer any health concerns) recorded her weight and height.

The ‘investigators’ approached the Moscow-based Centre for Socio-Cultural Expert Assessments, which is reportedly known for providing the opinions required by the FSB.  On this occasion, a mathematician, teacher and art historian perceived ‘pornography’ in nine of the photos.

It was after that second assessment, when Judge Nosova refused to extend Dmitriev’s detention beyond conclusion of the Serbsky Institute tests, that a glimmer of hope finally emerged.  It therefore came as a shock when Askerova ignored all the evidence in Dmitriev’s favour, and demanded a nine-year sentence.

Judges seldom go against the prosecution, and it can only be guessed whether the demand for a long sentence was made to create the illusion of a real trial, or whether there really was a change of position after that.

As mentioned, Dmitriev was convicted of a strange, almost forgotten, charge which was added after the others.  He was charged with illegal possession of a weapon over part of a rifle barrel, which Dmitriev once found among rubbish and took so that kids didn’t pick it up and try to do something with it.  A total acquittal would, after all, have been a serious loss of face and problematical, given that Dmitriev had been held in detention for 13 months.

Although Vladimir Putin has secured his fourth term as President, Russia’s hosting of the World Cup this summer might be an incentive to slightly loosen the screws in a political trial that had gone so obviously wrong.

Since the verdict acknowledged Dmitriev’s right to full rehabilitation of his rights, it is to be hoped that young Natasha, his foster daughter can now return home to the father she loves and is desperately missing.  Both Dmitriev and his lawyer Viktor Anufriev have stressed that she was the real victim of this squalid prosecution.

Although we may never know who commissioned the prosecution, it was widely understood to be linked with Dmitriev’s active role in uncovering the truth about the crimes of the Soviet regime, especially during the Stalin period.  It was no accident that the first appeals in defence of Dmitriev came from Ukraine and Poland.  It is thanks to Dmitriev, as well as to Memorial in general, that many of us have finally learned the fate of parents, grandparents or other relatives during the Terror.  It was Dmitriev and his Memorial colleagues who uncovered the mass graves at the Sandarmokh Clearing in Karelia, including those of 1,111 prisoners of the Solovky Labour Camp who were executed ‘by quota’ between 27 October and 4 November 1937.  The 290 Ukrainians murdered included playwright Mykola Kulish, poet Mykola Zerov and very many other prominent artists, scientists and public figures.