Ukrainian is serving 12 years in Russia for photograph of deserted aerodromeRussian jailed for 12 years for mystery ‘spying for Ukraine’Moscow’s Kafkaesque ’Ukrainian Spy’ CasesMoscow shouts ‘abduction’ yet holds Ukrainian hostages incommunicadoRussia holds 72-year-old Ukrainian hostage on absurd spying chargesRussian mother of 7 stands by her warning about Russian soldiers in UkraineRussian Mother of 7 accused of ‘treason’ released from custodyRussians call to release mother of 7 accused of revealing ’state secrets’Russian woman charged with ‘treason’ for reporting soldiers sent to UkraineRussian Newspeak: “Killed at exercises on the border with Ukraine”Russian soldiers’ deaths in Ukraine: A web of lies and fake social network pagesMore Russians aware that their sons are being sent to fight and die in UkrainePersecution of elderly activist exposing Russian soldiers’ deaths in Ukraine continuesRussian rights activist investigating soldiers’ deaths in Ukraine arrestedRussia continues lying about solders’ deaths in UkraineFirst reports on Pro-Kremlin TV of Russian soldiers killed in UkraineEntire Pskov paratrooper regiment killed in Ukraine?More Russian conscripts forced to fight in UkraineAttacked for asking why Russian paratroopers died fighting in UkraineThe Russian Invasion and Deaths Putin didn’t mention
• Topics / News from the CIS countries 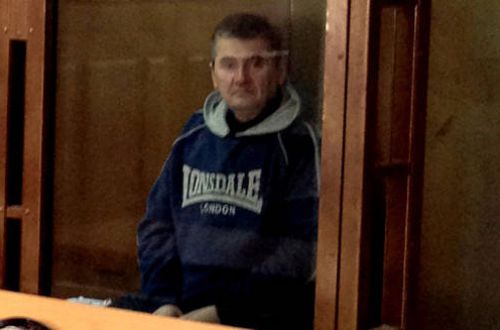 After concocting a ‘trial’ on truly surreal ‘spying’ charges to imprison Ukrainian Viktor Shur, Russia has since deployed any means to prevent him having contact with the Ukrainian consul and lawyers.  Shur’s daughter reports that the 61-year-old has been placed in a punishment cell to prevent the consul from visiting him on April 12. This is after a previous visit was prevented on the grounds that warning needed to be given, and that the Consul could be infected since some of the prisoners have an open form of tuberculosis.  Shur’s daughter is understandably anxious.  Not only is her father imprisoned on preposterous charges, but Russia is putting his very life in danger.

Olha Nalimova reports that the consul saw her father last summer. He planned to come again, but Shur was forced to sign a statement rejecting any visits from the consul, human rights activists or lawyers.   The method was brutally simple: any such attempt, he was clearly given to understand, would mean that he again ended up in a punishment cell, or in a prison even further away from his family.  Nor was this only threats, as he has learned.  As soon as the consul left the first time, Shur was flung in an unheated box without light, water, food, without even a toilet.  The conditions in the prison in Bryansk are already bad, and much worse even in standard punishment cells, and Shur suffers from chronic bronchitis and other medical conditions.

It is unclear what else Russia has to hide as Viktor Shur’s illegal imprisonment enters its fourth year.

Shur is one of three Ukrainians (together with Valentyn Vyvhivsky and the late Yuri Soloshenko) who were seized in Russia in 2014, charged with mystery ‘spying’ and sentenced to long terms of imprisonment.   In each case, it seemed that Russia first seized a Ukrainian and then fabricated some charges against him.

With Shur, the charges proved particularly fluid.  A client had phoned him in Ukraine and they arranged that Shur would drive to the Bryansk oblast.  He was supposed to return immediately, but simply disappeared.  The family began searching but it was only after a week that Shur phoned his partner and told her that he had been arrested for fighting with a policeman and that he would return in another week.

He was initially held in the Bryansk SIZO [remand prison] and then taken to the FSB’s Lefortovo prison in Moscow.

The family much later ascertained that he had been seized in the zone between the Ukrainian and Russian borders, where he was supposed to have photographed some kind of field.  Olha says that this was by men in masks, who broke the windows in the car and used smoke bombs.

It seems that the field in question had once been an aerodrome which her father had not known.  There was grass growing, and cows grazing, and nothing to indicate that this was some kind of important strategic site.

Such ‘spying’ cases are doubtless a favourite for the FSB since everything is held in secret, making it very easy to put pressure on the Ukrainians detained to ‘confess’ – whether through torture, or simply deceit.

Olha knows that the ‘investigators’ used psychotropic drugs to get ‘information’ out of her father.  He has not told her of other forms of torture, though she believes he may have been more open with his son, Valery.  The latter vanished last year and there is absolutely no information as to what happened.

Viktor Shur may have been tortured, but was certainly also simply tricked, told that everything would be fine if he simply cooperated.  He signed absolutely everything they put in front of him, and doesn’t even know what most of the documents were about.

Sur has been imprisoned in Russia since Dec 9, 2014, one of the first wave of victims of Russia’s undeclared war against Ukraine.

After finally opting for the charges of state treason and collaborating with the security service of a foreign state (i.e. Ukraine), the FSB claimed that Shur had been sent by Ukraine’s Security Service [SBU] to the Bryansk oblast to gather information about “a Russian military enterprise”.  This was how the abandoned aerodrome and mines for launching ballistic missiles were described.  The mines had been flooded back in the 1980s, so such information was of no interest to anyone, let alone a security service.

He was sentenced, despite keeping his part of the bargain, to 12 years.

Please write to Viktor Shur – it is very important to him to know that Ukraine and people beyond are concerned about him, and any letters or cards also send an important message to Moscow that he is not forgotten.