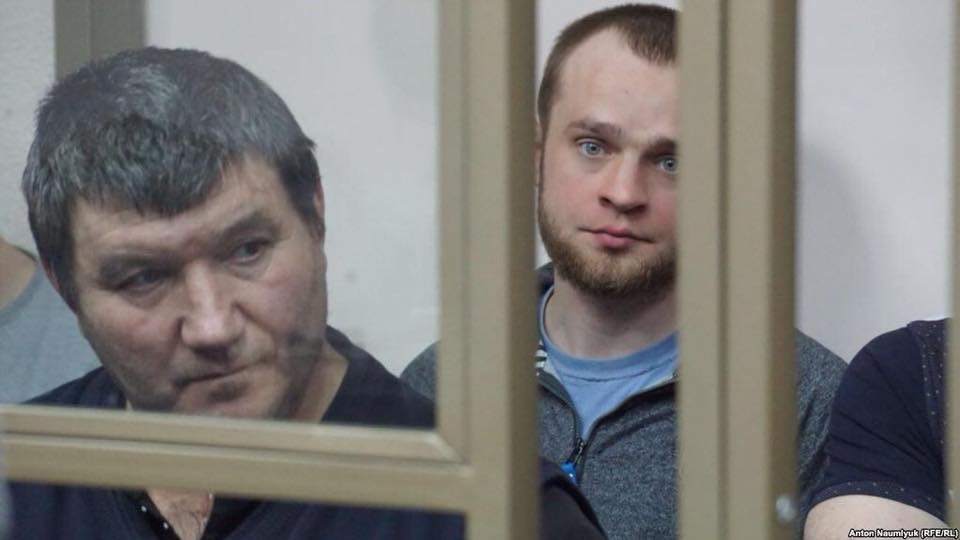 Crimean Tatar Human Rights activist Emir-Usein Kuku and five other Ukrainian Muslims are facing huge sentences on fatally flawed charges with the ‘evidence’ so far provided by a traitor, now working for Russia’s FSB, and an alcoholic ‘secret witness’, .  None of this is new for Russia, where such conveyor belt ‘trials’ are wholesale, but the situation in Crimea is different for a number of crucial reasons.

Russia has imprisoned Ukrainian Muslims on Crimean territory which it is occupying illegally.  It has no right to apply Russian law in Crimea, and here the charges are of involvement in an organization - Hizb ut-Tahrir – which is legal in Ukraine.  All of these factors prompted the renowned Memorial Human Rights Centre to declare all six men - Muslim Aliev; Refat Alimov; Inver Bekirov; Arsen Dzhepparov; Emir-Usein Kuku and Vadim Siruk - political prisoners without awaiting the end of the ‘trial’.  It does, in any case, consider all those convicted solely of alleged involvement in Hizb ut-Tahrir political prisoners since Russia has provided no grounds for its claim that this is a ‘terrorist’ organization, and it is effectively persecuting Muslims for their faith.

There is, in fact, another difference since in Crimea, many of those arrested on such charges are people who have taken a strong civic stand, especially in defending victims of Russia’s political persecution.

The most flagrant persecution is that of Emir-Usein Kuku, whose harassment began soon after he became active in the Crimean Contact Group for Human Rights.  He was the victim of an apparent abduction attempt which only turned into an ‘FSB search’ after Kuku’s cries for help were heard and a large group of people gathered.

There are strong grounds for believing that Muslim Aliev has also been targeted for his civic position and his role as informal leader of a local Muslim community.  It also appears that the two youngest men – Refat Alimov and Arsen Dzhepparov – were arrested in revenge, since Alimov’s uncle Enver Bekirov (who had already been arrested) and Dzhepparov himself refused to ‘cooperate’ with the FSB, by giving false testimony against others.

Aliev, Kuku, Bekirov and Vadim Siruk were arrested on 11 February 2016, during armed and gratuitously violent searches of their homes, with the children present deeply traumatized by the men with machine guns who burst in and forced their fathers to the ground.  They came for Alimov and Dzhepparov on 18 April that year.

47-year-old  Aliev has been designated ‘organizer’ of a Hizb ut-Tahrir group and faces a sentence of from 15 years to life imprisonment under Article 205.5 § 1 of Russia’s criminal code (organizing a group declared terrorist), while the others are charged with ‘involvement’ (Article 205.5 § 2) and face from 10 to 20 years.  In January 2017, the FSB suddenly added another charge – of ‘planning violent seizure of power’ (Article 278 of Russia’s criminal code) with this adding a further eight years to the sentences.

None of the men has a criminal record, and, despite the shocking charges and related sentences, none is even accused of anything that could credibly be considered a crime.

The ‘evidence’ for the charges is a conversation illicitly taped by a person who was clearly working for the FSB, and steered the conversation so as to ask questions aimed at receiving ‘incriminating’ answers.

It is possible that this person was the secret witness who appeared at the Rostov military court (in Russia) on 13 and 14 April, 2018.

The defence objected when the prosecutor Igor Nadolinsky asked that the next witness be ‘secret’, saying that there was no evidence that the person had faced any threats.  These conveyor belt cases have long used ‘secret witnesses’, and the prosecutor did not really even try to claim a need, just that it was in accordance with the law.  The three judges rejected the defence’s objections, and even the man’s voice was distorted.  The only verification carried out was that the three judges checked the man’s passport.

This secret witness refused to say where he had met the defendants, claiming that this would place him and his close relatives in danger. He was then left by the prosecutor to go into free flow.  He claimed to know the men because he was under the influence of the Hizb ut-Tahrir party, and that he had been invited into the ‘organization’ by Kuku, who had “first talked about Islam, and then about politics”.

The testimony is clearly intended to be dead incriminating, though in the main reveals only the lack of any elements of crime, even if the conversations he describes really did take place.  He says, for example, that the men went to protests so that the world would see that Crimean Tatars “are against Crimea as part of Russia”.

The ‘witness’ repeats the key points of the indictment, including with respect to the more serious charges against Aliev.  During the first trial of Crimean Tatars on Hizb ut-Tahrir charges, there was such an obvious lack of any evidence that the first ‘trial’ ended in three men receiving the minimum sentences possible, and Ruslan Zeytullaev’s charge of ‘organizing’ a Hizb ut-Tahrir unit being changed to mere ‘involvement’, with the sentence of seven, not the demanded 17 years.  It took the FSB two more tries before they got a 15-year sentence for Zeytullaev, which they needed for their paperwork.  Each of these ‘Hizb ut-Tahrir cases’, has to have an ‘organizer’, and this the ‘secret witness’, whose testimony can in no way be verified, obligingly provides.

The individual also threw in ‘confirmation’ of the charge only added in January 2017, namely that these six men were planning ‘to violently overthrow’ the Russian regime, without a single weapon, etc.

A further assertion was not even included in the indictment but was mentioned in court.  According to him there had been a ‘Shariat court’ with Aliev as judge and Kuku as investigator, which had allegedly declared the Mufti of Crimea Emirali Ablaev an infidel.  Ablaev decided to collaborate with the occupation regime, and there is evidence that he has provided denunciations of certain Crimean Muslims.

While making sweeping allegations about Hizb ut-Tahrir seeking to come to power,  and it’s being a “world conspiracy”, he went on to accuse the men of “recruiting people, preaching Islam and meetings of Hizb ut-Tahrir units, as well as circulating Hizb ut-Tahrir proclamations”.

During cross examination, he was forced to acknowledge that no Hizb ut-Tahrir publications had been circulated after March 2014, nor had there been any Hizb ut-Tahrir meetings after Russia’s annexation of Crimea.

Aliev, Bekirov and Siruk all dismissed the ‘witness’’ testimony as lies, with Siruk identifying him as Khasan Kurbanov. He said that he had caught Kurbanov out for alcoholism in 2015, and then saw him together with Alexander Kompaneitsev.  This ex-SBU officer, now turned FSB, played a major role in earlier persecution of Kuku, in threatening to arrest Bekirov’s nephew unless he gave false testimony, and to arrest Dzhepparov unless he agreed to collaborate with the FSB, and much more.

He was questioned in March, though refused to answer almost all questions regarding, for example, “the objective activities of the accused in planning to overthrow the constitutional order”, claiming that he couldn’t answer in connection with state secrets.  Despite this, the defence’s application to have the hearing held behind closed doors so that Kompaneitsev could reveal such ‘state secrets’ was, rejected, with the prosecution and court willing to forego clarification as to what exactly is supposed to justify 10, 20 or life sentences on men who have never committed any crime.