Ukrainian neo-Nazi C14 vigilantes drive out Roma families, burn their campFar-right thugs attack Ukrainian film festival DocuDays human rights eventsUkrainian ‘C14’ Neo-Nazis openly offer to act as thugs for moneyTrial begins of two C14 far-right activists accused of killing controversial journalist Oles BuzynaUkrainian police disturbingly passive during far-right attack on Kyiv gathering in memory of Markelov & BaburovaAnother Roma camp attacked and burned down in Ukraine, with police seeing only ‘hooliganism’Third violent attack on a Roma camp in Ukraine in just over a monthFatal attack on Roma Camp in Lviv leaves young man dead, a child and others injuredWith Axes And Hammers, Far-Right Vigilantes Destroy Another Roma Camp In KyivProtests throughout Ukraine following 7-year sentence against civic activist Serhiy SternenkoIzolyatsia: a Donetsk concentration camp too toxic even for Russia? Tortured but alive! Over two years waiting for news of Donbas militants’ hostage Why would Russian Wikipedia censor information on the Donetsk Izolyatsia secret prison?Bandera. An Invitation to a Calmer ConversationA brief description of the KHPG strategic litigations in July–December 2020Russian propagandist seized by Donetsk militants ‘for spying for Ukraine’ MPs challenged to fight Russian repression by adopting a Ukrainian political prisonerSavagely beaten Maidan activist Tetyana Chornovol formally charged with a non-existent murderExpert opinion (Amicus Curiae) on the application and interpretation of the case-law of the European Court of Human Rights in criminal proceeding № 52017000000000361Opinion on the political motives of criminal persecution and violation of human rights in the case of Sergiy Pashinsky
• Topics / Interethnic relations
• Topics / Law enforcement agencies

Video footage and witness accounts of the violent dispersal of a Roma camp on Lysa Hora by neo-Nazi C14 thugs emerged on 25 April which were in stark contrast to the version of events presented by the Head of the Kyiv Police, Andriy Kryshchenko.  By evening on 25 April, the police finally announced that a criminal investigation had been initiated after days of implausible denial.  The events have elicited strong, and sometimes worrying, reactions on social media.  It may be arguable whether a Roma camp should be allowed to exist on the territory of a nature reserve, but it was indisputably not the prerogative of a band of neo-Nazi C14 ‘activists’ to have dispersed it and set fire to the families’ tents.

The video posted by LB.ua shows whole families running in terror from young men, many in masks, hurling stones and spraying gas canisters in the direction where families with some very small children were trying to take shelter.  One Roma man tries to hold a thin branch in defence, but clearly understands that he is outnumbered and also moves away. 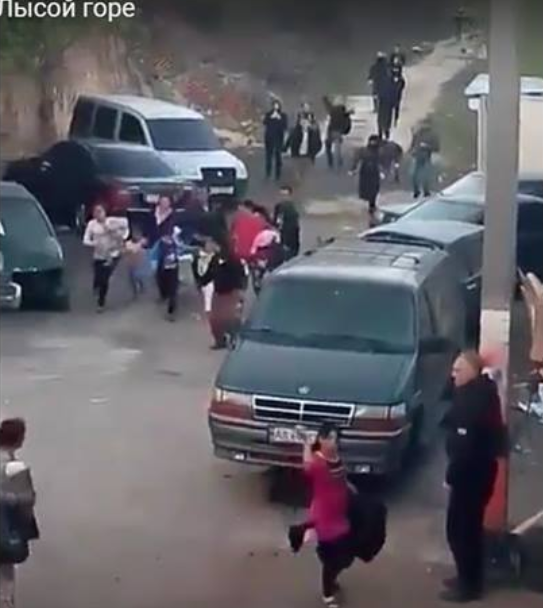 Shouts can be heard for the police to help, and one witness told LB.ua that the police had been called.  Amnesty International Ukraine has also cited activists who were told that at least one of the Roma waited for the police patrol to arrive. “While the Roma took cover near the garages not far away, the police officers went up to their camp and found the tents on fire.  Returning to the Roma, they told them that everything was ablaze and advised them to leave Kyiv as quickly as possible”.

Journalist Yevhen Savateyev is one of several members of the Youth for Peace movement who have been visiting Roma camps for several years, seemingly both in Kyiv and in Transcarpathia.  He explains that the volunteers run festive events for the children, teach them to read and write and play football with them.  They have also run summer camps where the Roma children live together with other Ukrainian kids.

There were around 15 makeshift tent-huts  on Lysa Hora.. Savaleyev reports that a few days before the events, people who said that they were from the district administration appeared and checked that they had railway tickets home.

The father of one of the families has told him that on the day that the camp was set alight, they had gone to the railway station.  He says that he was phoned by a man from the administration who told him that they could return and continue to live on Lysa Hora, When they came back, however, they were met by the ‘nationalists’, as they call themselves, who, he says, were armed with knives, stones, gas canisters and a pistol.

As reported, the effective pogrom and burning of the camp took place on 20-21 April, with C14 activist Serhiy Mazur describing it in detail on his Facebook page.  While Mazur kept talking about action “within the framework of the law”, etc., he also spoke of the camp residents having been issued with an ‘ultimatum’, and warned that there would be a different approach if they didn’t comply.

This effective vigilante action by a new-Nazi group made the reaction from police management over the next four days extremely worrying.

Even on 25 April, the Head of the Kyiv Police still repeated earlier police claims that they had not received any complaints of violence or beatings.  It was quite possible that the families who were driven out decided not to make a formal complaint (whether out of fear, or because they saw no point), but the police had received calls for help and must have been aware what was happening.

Asked during an interview given to 112.ua why there were noticeably more Roma in Kyiv at present, particularly at the railway station,  Kryshchenko answered that many had come for the remembrance week around Easter, when a lot of people visit graves.  While stressing that they have the same rights as any other Ukrainian citizens, Kryshchenko does talk about increased police patrol of the station, and says that they are “almost daily detaining Roma who commit crimes”.

With respect to the events on Lysa Hora, Kryshchenko said that the police and representatives of the social services for minors had gone to the camp several times.

Around an hour or so before the video of families fleeing was made public, Kryshchenko saw fit to mention only the burning of tents.

“Most of these Roma came for the remembrance days and they left. Yes, they left a lot of rubbish behind them, but that rubbish was burned.  We did not have even one complaint from Roma of beatings or violence.

And, as far as I know, during this subotnyk [a Saturday clean-up], when they burned rubbish, representatives of the district administration and firemen were present.”

He assured the interviewer that they are very clear when the police should intervene and when not, and said that they “will not allow these temporary settlements to be dispersed if they don’t break the law”.

Merely from the account given by C14 activists themselves, it was difficult to describe even the burning of the camp as some kind of peaceful ‘clearing of rubbish’, and photos  published by Savaleyev showed children’s clothing and food items left, as though people had fled in haste.

In his report on 19 April, Mazur did state that the C14 activists had appeared together with representatives of the Holosiyiv administration and gave their ‘ultimatum’ to leave by the following day. There is nothing to suggest any court order for the inhabitants to move, and nobody present had any authority to remove them by force.

On Wednesday evening, the police reported that “criminal proceedings have been initiated over the publication of a videoed attack on Roma”.  The investigation is under Article 161 of Ukraine’s Criminal Code (violating citizens’ equal rights on the grounds of racial or ethnic identity, religion etc.), as well as Article 296 – hooliganism.  They are now calling for witnesses to the events.

This is not the first time that Roma camps have been burned, or anti-Roma pogroms carried out with effectively no adequate response from the police.

On the eve of the Euro 2012 Football Championship, which Ukraine and Poland jointly hosted, a Roma camp in Bereznyaki in Kyiv was set alight, with this appearing to be at the instigation of the authorities. Up to 60 people were left homeless.

In 2017, shortly before Eurovision, which was held in Kyiv, a Roma camp on the Left Bank was also set alight.

In August 2016, the murder of a young girl was used as the pretext for an anti-Roma pogrom in Loshchynivka, a village in the Odesa oblast.  One of the most disturbing aspects of this was the role of the authorities in ‘persuading’ the Roma to leave the area and the lack of action from the police in the Roma’s defence. There are grounds for doubting that the young man now on trial for the murder is guilty, and there remains resistance to any attempts to investigate the police inaction (details here).

While it is good that a criminal investigation has now been initiated over the events on Lysa Hora, it is only thanks to a video, with other evidence simply ignored.

Since the Head of the Kyiv Police is on record as saying that members of the Holosiyiv District Administration were present during the burning of the camp, and C14 has claimed that they were there when the ‘ultimatum’ was given, this also warrants urgent investigation.

The reasons for concern about any cooperation between C14 and local administrations and / or the police are listed here.  C14 activists claim to be ‘nationalists’ defending Ukraine against ‘separatists’, ‘titushki’ or paid thugs, corrupt courts, etc.  Their view of who is ‘separatist’ is highly specific and open to doubt, and their effective offer to act as titushki themselves for their ‘donors’ a matter of immense concern.  Even if one believes C14’s public denial of their neo-Nazi views, and there are grounds for disbelieving them, they have a long track record of intolerance towards people whose race, religious or political views, or sexual orientation are not to their liking.  As Amnesty International Ukraine pointed out, “any Roma, women, anti-corruption activists, Jews, LGBT, journalists, artists, students, writers could become the targets of such attacks. Nobody can be sure that they will not be the target of a pack of radicals who have tasted impunity”.