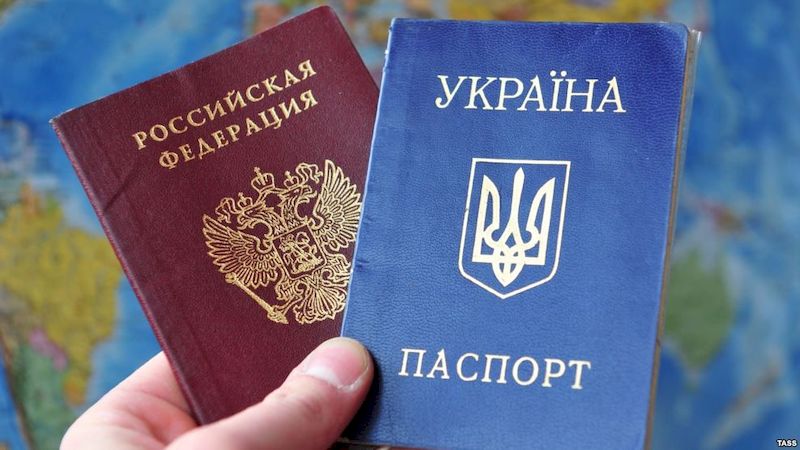 Teachers in Russian-occupied Crimea are demanding information from parents as to whether their children have Russian citizenship and what residence status they and their parent(s) have.  The document came to light in connection with angry reactions from pro-Russian officials  to the large number of Crimeans obtaining Ukrainian biometric passports.  Russia’s first attempts to effectively eliminate Ukrainian citizenship hit hurdles from the outset, and four years after its invasion and annexation, there is nothing to suggest that most Crimeans want to renounce their Ukrainian citizenship.

This is galling for two reasons, though Vladimir Konstantinov, Speaker of the Crimean parliament under occupation only mentioned one.  He claimed that “we made our decision in 2014” and that trying to have “all the benefits from Russia, but want something else in case” was craftiness that needed to be stopped.

What he did not mention, for understandable reasons, is that the claims made back in 2014 as justification for Russia’s invasion have not materialized.  The only bloodshed and chaos in Ukraine was that organized, armed and manned in Donbas, and the supposedly ‘fascist’ government in Kyiv did not disintegrate.  Even more annoyingly, a Russian passport for Crimeans may well get them refused a visa to EU countries, whereas Ukraine has enjoyed visa-free travel for over a year.

The differences between the practical value of a Russian versus a Ukrainian passport make it dangerous to assume that the people seeking Ukrainian biometric passports are making a political statement.

Ukraine has rightly waived the ban on dual citizenship by viewing all those on occupied territory as not having voluntarily renounced Ukrainian citizenship.  This does mean that some of the Ukrainians crossing into mainland Ukraine are people whom the enforcement bodies wish to prosecute for actions viewed as betraying Ukraine.

Konstantinov came up with “dozens” of such cases as a second argument for not going to mainland Ukraine, claiming that Crimeans could face “detention, arrest, extortion, open robbery, anything could happen”.

In fact, the number of such arrests is small, but one was doubtless fresh in Konstantinov’s mind.  Olena Odnovol, head of the Crimean faction of an organization called ‘Volunteers of Victory’ was detained by Ukraine’s Security Service [SBU] when she tried to cross into mainland Ukraine, seemingly to get herself a passport.  For her active role in promoting Vladimir Putin during the Russian presidential elections held illegally in Crimea, she is accused of treason.

The pro-Kremlin Crimea Inform mentions two other arrests – of an ex-‘minister of sport’ (probably Farukh Kamalov) and deputy of the Yevpatoria City Council under occupation (Serhiy Osminin).

Those most active in Russia’s invasion and annexation have long been under international sanctions, and would be most unlikely to try to get into mainland Ukraine.  There are, however, a number of ‘prosecutors’ and ‘judges’ in occupied Crimea whose involvement in Russia’s persecution of Ukrainians certainly warrant sanctions.  Most would face prosecution if caught.

Andrey Kozenko, a member of Russia’s State Duma, is also immensely put out by Crimeans wanting Ukrainian passports, and suggests that there needs to be a norm about obligatory notification to the Russian migration service “about such actions”.

This would presumably be intended to be as intimidating as the above-mentioned questionnaires received by Crimean schoolchildren and their parents.

Kozenko is either forgetful or hoping that others don’t remember that Russia tried precisely this in 2014 and it didn’t work.  There was supposed to be a new requirement from January 1, 2015 that Crimeans would have 60 days to inform of dual citizenship or face criminal liability.  Russia did a full turn-around on this, saying it did not apply to Ukrainian citizens in Crimea, probably because of the embarrassing images likely of vast queues outside migration service offices.

Shortly after annexation in March 2014, Russia gave Crimeans wishing to retain their Ukrainian citizenship only a month to register this, with only four offices available for the entire peninsula.  Russia has since, very selectively, used the lack of such a formal statement to claim that Ukrainians, like imprisoned filmmaker Oleg Sentsov and civic activist Oleksandr Kolchenko ‘automatically became Russian citizens’.   The formal rejection of Russian citizenship has been used as grounds for treating Crimeans, like Volodymyr Shlyakov, living in their own home as ‘foreigners’  It has also been used to effectively ‘deport’ people like Crimean Tatar human rights activist Sinaver Kadyrov and ban veteran Crimean Tatar leader Mustafa Dzhemilev and Mejlis leader Refat Chubarov from their homeland.