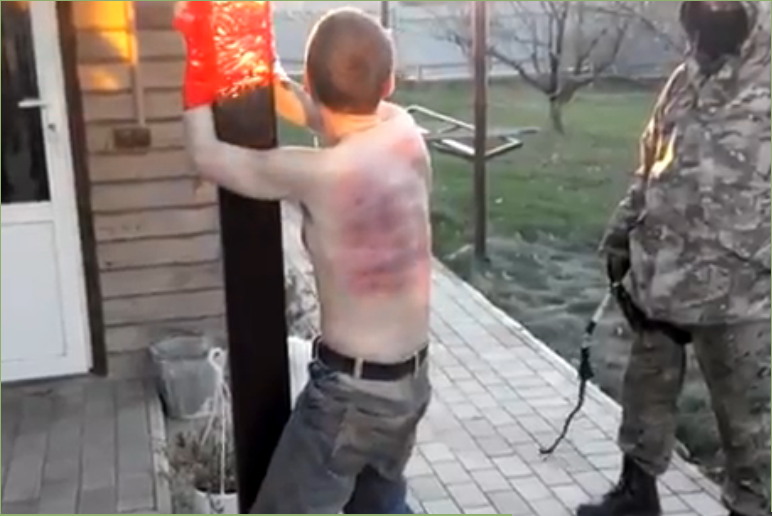 Two Ukrainian human rights groups have compiled an important report documenting crimes committed by militants of the self-proclaimed ‘Donetsk people’s republic’ [DPR], as well as evidence of the deployment of Russian military personnel in Donbas during 2014 and 2015.  Truth Hounds and the Ukrainian Helsinki Human Rights Union [UHHRU] will be passing the report ‘Говорять застінки’ [The torture chambers speak} to the International Criminal Court in the Hague.  They believe it can help to establish Russia’s major part in the conflict, as well as in bringing those responsible for war crimes to justice.

The study just published is based mainly on the testimony of 138 former prisoners of war or civilian hostages, as well as on substantiating evidence from trustworthy independent sources. The authors stress that any investigation of war crimes and crimes against humanity entails very strict demands on the data used and its verification.

On the other hand, Roman Avramenko, one of the authors, points out that the International Criminal Court [ICC] does accept witness testimony as evidence, if different witnesses in differing circumstances and times give similar accounts.  This differs from the situation in Ukrainian courts where material evidence is required.

The study provides irrefutable evidence of torture and ill-treatment of both Ukrainian soldiers and civilians who were held captive in Donetsk; Horlivka; Snizhne or Torez..  There are cases of prisoners being killed, or subjected to fake executions; being ‘recruited’ into illegal armed formations.  Minors have been used in such armed bands, and there are also cases documented in at least two locations of sexual abuse.

The authors have compiled a list of names of people, including Russian military personnel, whom they believe should be put on trial for such crimes.

Some of the torture and ill-treatment was so bad that before the interviews, the victim had never spoken of their experiences with their families.  The harrowing accounts given in the report make it clear why.

The authors believe there is ample evidence to suggest the involvement of both Russian military formations and security service [FSB] in the administrative structures in occupied Donetsk, and in particular in the former SBU officers where prisoners are held

Witnesses reported seeing technology (several examples are provided) which the Ukrainian Armed Forces do not have.  Some of the witnesses also spoke of seeing Russian military personnel at the former SBU.  One Russian spetsnaz officer was held prisoner because he had beaten somebody up very badly and been flung into a cell as punishment.

The functioning of the former SBU premises used for holding hostages was coordinated with the Russian security service, with the ‘prison overseers’ brought in from Russia.  The rights organizations believe they have ample evidence of active involvement by Russia in detaining, torturing and ill-treating people held captive.

There appear to be three separate accounts (see No. 176) of victims calling Russians the ‘overseers’ in charge who issued orders to beat captives during interrogation.

Part 7 of the report covers testimony regarding the engagement of Russian military units in Ukraine.  A large number of Ukrainian soldiers were taken prisoner in August 2014 as the result of military action in which Russian units were involved.  Some of those interviewed clearly identified the men who took them prisoner as Russian soldiers.

It should be noted that the testimony in this report corresponds to that provided earlier in, for example, the report by other human rights groups Surviving Hell (details here  Russian military & mercenaries directly implicated in torture of Ukrainian prisoners.

It is likely that many of the former hostages and POW released in an exchange on 27 December 2017 have already, or will, also provide valuable testimony.

The former civilian hostages included Halyna Hayeva who had spent 15 months in DPR captivity for passing information to Ukraine’s Security Service about Russian officers and ordinary soldiers receiving treatment in her hospital.  With Russia denying such engagement, this was enough for the Kremlin’s proxies to sentence her to 10 years’ imprisonment.

While very important that the International Criminal Court should investigate these war crimes in Donbas, UHHRU lawyer Serhiy Movchan stresses that Ukraine’s enforcement bodies must not sit back and do nothing.  If there are elements of a non-international conflict, as well as an international, then Ukraine must take measures to ensure accountability .