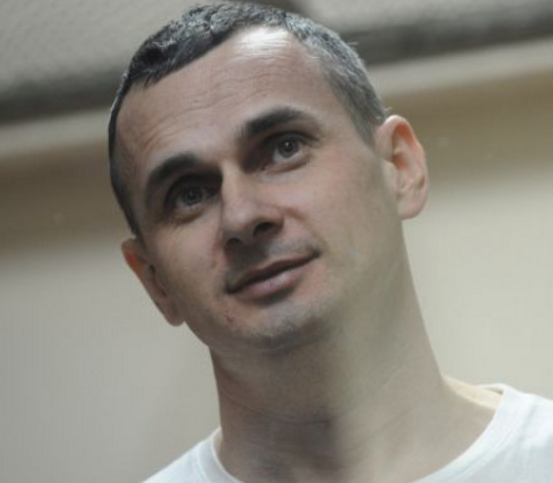 Oleg Sentsov, world-renowned filmmaker and one of Russia’s first Ukrainian political prisoners has gone on hunger strike, vowing not to end it until Russia frees all its Ukrainian political prisoners.  His move comes just a month before the World Cup is due to begin in Russia and the timing is no coincidence.  There was every reason for the International Football Federation [FIFA] to have taken the World Cup away from Russia after its unprecedented invasion and annexation of Crimea and aggression against Ukraine.  FIFA failed to do so, potentially handing the Kremlin a weighty propaganda coup.  Oleg Sentsov, who has spent four years of a 20-year sentence in Russian captivity for peacefully opposing Russia’s invasion of his homeland, has taken the only, and most dangerous, step in his power to change this, and it is vital that his indefinite hunger strike receives maximum attention.

It seems he has been planning this move for the last month and a half, rejecting food parcels and reducing his food intake, and he fully understands the possible consequences.  He told his lawyer, Dmitry Dinze: “If I die before or during the World Cup, there will be publicity that can help other political prisoners”.

“I, Oleg Sentsov, Ukrainian citizen, sentenced illegally by a Russian court and held in a prison colony in Labytnangi, have declared a hunger strike, beginning 14 May 2018. My sole demand is the release of all Ukrainian political prisoners held in the Russian Federation.

Together to the end.  Glory to Ukraine!”

Dinze has brought the statement back after visiting Sentsov at the prison colony.  According to journalist Anton Naumlyuk, Sentsov has been placed in a separate cell since the beginning of his hunger strike and a doctor is monitoring the situation. He has been warned that if his health deteriorates to a critical level, that they could apply force-feeding.   In the event that they try to declare him mentally unfit (this being the widespread practice in the Russian penal system to counter hunger strikes), Sentsov points out that there is a medical assessment in his file which found him mentally fit.

It is four years since Sentsov was arrested in Crimea together with three other opponents of Russia’s invasion and annexation: civic activist Oleksandr Kolchenko; Gennady Afanasyev and Oleksiy Chyrniy.

There were particularly absurd elements to the FSB ‘plot’ such as the focus on the right-wing and ultra-nationalist ‘Right Sector’.  There was nothing to suggest any Right Sector presence in Crimea, nor any involvement by any of the men in it.  The charge in the case of Kolchenko was particularly nonsensical since the young man is a committed anarchist with pronounced left-wing views.

Sentsov and Kolchenko remained adamant from the start that they were innocent and Sentsov, in particular, has given a detailed account of the torture methods used, and the threat that if he didn’t ‘confess’, he would be made the ‘mastermind’ of a terrorist plot and get 20 years.

The Kremlin has ensured that Sentsov, Kolchenko and other political prisoners are imprisoned beyond the Arctic Circle or in the Far East, and that the Russian population hear either lies from the state-controlled media about supposed ‘terrorists’, or nothing at all about them.

Russian President Vladimir Putin was doubtless hoping that their isolation would minimize attention to them during the FIFA World Cup.  Russia’s hosting of this was  inexplicably never withdrawn despite its invasion of Crimea, military aggression against Ukraine and multiple human rights abuses.

There are at least 70 Ukrainians held prisoner on politically motivated charges or for their faith in Russia and Russian-occupied Crimea.  Details about most of the people whose release Oleg Sentsov (and not he alone) is demanding can be found here.

Please write to Oleg and to Oleksandr (Sasha) Kolchenko!