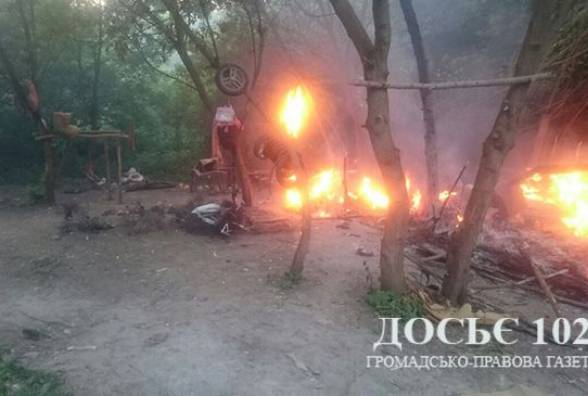 There has been another arson attack on a Roma camp in Ukraine, the third in just over a month, with this one accompanied both by shooting and by an appallingly xenophobic report on the Facebook page of a local media publication.  While the police do appear to have responded swiftly this time, there is again a marked difference between their preliminary version of events and that expressed by Human Rights Ombudsperson Ludmila Denisova, who clearly points to the likelihood of this being a hate crime on ethnic or racial grounds..

The National Police for the Ternopil Oblast reported on Tuesday morning that they had been called at around 22.00 the previous evening, 22 May, by a woman who said that they had been attacked by a group of around 15 young people.  As well as verbal abuse, the assailants had fired shots and tried to beat them with bats.  Most managed to get away, though one person was beaten on the back with a stick, though did not seek medical help.  The police say only that the tents went up in flames during the conflict, though it seems clear from other reports that they were deliberately set alight, as they have been during the two earlier attacks.

The camp is opposite the sugar factory in the township of Velyka Berezovytsa, near Ternopil. The residents had come from the Transcarpathia oblast, and earned money by collecting scrap metal.

There are conflicting reports as to how many people were present when the assailants attack, with the police saying seven adults and 15 children and the Ombudsperson saying 30 children.

The police found bullets probably from a pneumatic rifle, and later stopped 12 individuals, some of them minors, who were ‘invited’ to the Ternopol police station. All were questioned, but then released.

At a briefing later on Wednesday, Oleksandr Bohomol, Ternopil Oblast Police Head,  said that they now believed that there had been around 20 attackers, some of whom, according to the victims, were wearing masks. He promised that the role of each individual would be swiftly established, and said he was convinced that this was a local conflict.  He had earlier stated that one of the versions that the police were considering was that this had been a ‘conflict between the local population and the Roma’.  He said that there had been complaints about “the negative behaviour”, as he put it, of the camp residents.

In both this case and that of the attack on a Roma settlement in Rudne, near Lviv, the police initiated criminal investigations under ‘hooliganism’, while the Ombudsperson spoke of clear signs of discrimination on ethnic grounds and incitement to enmity against the Roma minority.

Denisova expressed concern at the rising number of incidents based on intolerance towards representatives of the Roma national minority, and mentioned the attacks by radicals on Roma camps at Lysa Hora in Kyiv and Rudne near Lviv.

The police would be advised to look at the 20 Minutes Facebook page if they are in any doubt as to whether this constituted an anti-Roma hate crime.  There was an offensive caricature of a Roma man under a sign reading ‘Farewell’ as accompaniment to a text reporting that the residents of two camps at Berezovytsa had left in an unknown direction.  The link no longer opens, hopefully because there was enough public outrage, but the screenshot can be seen below.

The arson attack against the Rudne camp on 9 May also left a number of families homeless.  While the police spoke of ‘hooliganism’, witnesses reported a crowd of around 30 young masked thugs of athletic build, who forced the residents to flee, and beat up one person who didn’t get away in time.

Another factor gravitating against some kind of simple hooliganism is that the residents of three local camps had reportedly been warned that an attack was planned several days in advance.

On that occasion, like on 23 May, the Ombudsperson issued a statement in which she said that “such demonstrations of xenophobia need particular attention from the police, including a more thorough investigation, as well as measures of a preventive nature to stop such cases in future”.

Although the police reacted more swiftly on 23 May, in both cases they continued to claim only hooliganism.

The situation was much worse after the attack by neo-Nazi C14 thugs on the Roma camp at Lysa Hora on 20-21 April, despite the fact that C14 activist Serhiy Mazur used his Facebook page to publicly boast of their actions, albeit while using euphemisms for the violence and threats, such as “convincing arguments”.

Although residents of the camp reported having called the police, the head of the Kyiv police was still in active denial just an hour before a video was published by LB.ua, showing whole families running in terror from young men, many in masks, hurling stones and spraying gas canisters (details here and here).

It was after the video was posted that the police finally reported that criminal proceedings had been initiated under Article 161 of Ukraine’s Criminal Code (violating citizens’ equal rights on the grounds of racial or ethnic identity, religion etc.), as well as Article 296 – hooliganism.

Mazur has since reported that he and others from C14 have been summoned for questioning over the events on Lysa Hora.  Despite the shocking images of that video, there is nothing so far to suggest that any further progress has been made to hold those responsible to answer.