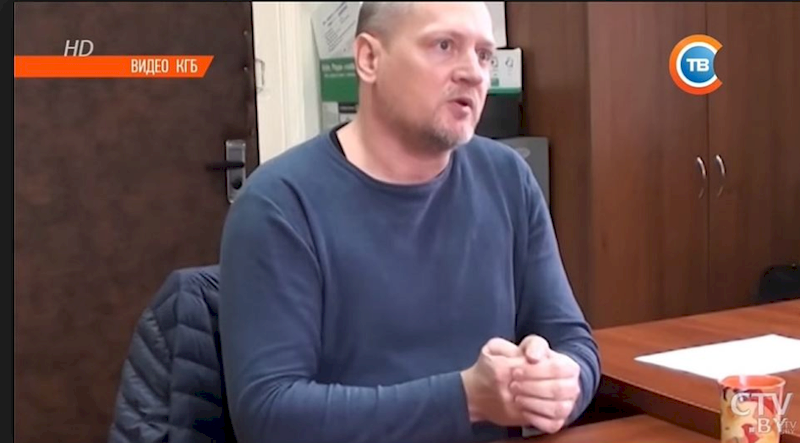 The Belarusian Supreme Court has found Pavlo Sharoiko guilty of ‘spying’ and sentenced him to eight years’ imprisonment. The level of secrecy about this case, and the fact that Sharoiko has only had a state-appointed lawyer make scepticism about his apparent confession to the charges seem warranted.

The 46-year-old Ukrainian journalist was working as Minsk correspondent for Ukrainian Radio when arrested on 25 October 2017 and charged with espionage (Article 358 of the Belarus Criminal Code).  He reportedly followed the cases of Ukrainians illegally imprisoned in Russia and had been probing the abduction from Belarus to Russia of 19-year-old Pavlo Hryb.  He was reported to have worked in the past for military publications and had also reported on military exercises taking place in Belarus.  According to Svitlana Myalik, from Ukrainian Radio’s Foreign Desk, Sharoiko’s last material before his arrest was on a meeting in Minsk of the trilateral contact group on Donbas.

It was only on 17 November 17, that news of his arrest was made public.  The delay then was possibly so that Sharoiko’s wife Olena and the couple’s daughter could get back to Ukraine.  Back in November, Olena Sharoiko called the charges against her husband incomprehensible.  She said that the only contact she had had with her husband had been by letters, with the first coming a week and a half after his arrest. She could get no information either from the state-appointed lawyer who had signed an undertaking not to divulge any details.

Three days after the belated news of his arrest, Belarusian TV produced a report with a person who looked like Sharoiko who was said to have ‘confessed’ to working in military intelligence and using his journalist post as a cover. The small excerpt on the video where Sharoiko is speaking is fairly inconclusive, while also clearly giving the impression of his saying what is required of him. He speaks of Ihor Skvortsov, a member of the Ukrainian Embassy in Belarus who is supposed to have coordinated his activities and who was declared persona non grata that same day, 20 November 2017.

The Belarusian media reportedly asserted that Sharoiko had also ‘confessed’ to being a professional military intelligence office.  Ukraine’s Defence Ministry rejected the claim regarding Sharoiko’s military post and the accusation that he had created a network of agents and was engaged in intelligence activities in Belarus.  It was claimed that these agents had provided him with intelligence information in return for financial remuneration.  In a statement issued that day, they said that Sharoiko had been head of the Defence Ministry’s Military Intelligence Department [HUR] Press Service, but had resigned from military service in 2009 on health grounds.  He had, since then,, engaged in his original profession, namely journalism.

Sharoiko had worked in Belarus since 2011, first for UNIAN, and then, from January 2015, for Ukrainian Radio.

News of the 8-year sentence handed down by the Belarusian Supreme Court was made public by Ukraine’s Ambassador to Belarus Ihor Kyzym during a forum on 23 May, although the court trial took place back in February this year.  Radio Svoboda reported that the trial behind closed doors had begun in Minsk on 12 February in an article from 20 February entitled: “Secret trial in Belarus of Ukrainian journalist: has sentence been passed on Sharoiko?”

There had been other trials in the past behind closed doors, the article said, but this trial seemed to be the most secret ever, with an information blockade about court hearings and about whether the sentence had been handed down.  There was also no possibility of appealing since the sentence was handed down by the Supreme Court.  All of this and the fact that Sharoiko’s ‘confession’ was provided without an independent lawyer while the journalist was totally under Belarusian KGB control raises serious concerns about the trial.

It is possible that this is a tit-for-tat situation.  A Belarusian Yury Politika was arrested in the summer of 2017 in Ukraine, and accused of spying.  The charges appear to be of trying to gather information for Russia in the zone of military conflict in Donbas, and are denied by Politika himself. The trial is underway, though going very slowly (because of judges being withdrawn and other reasons) in Chernihiv.

Other political motives are possible.  Kyiv Post’s Oleg Sukhov believes that the Sharoiko case is “part of yet another crackdown by Belarusian dictator Alexander Lukashenko on media and civil society” and points to the arrest in April of 38-year-old Dzmitry Halko, a Ukrainian – Belarusian journalist.  Ostensibly on charges of ‘attacking a police officer’, it does seem likely that Halko has been targeted for his role in Belarusian Partisan and other independent Belarusian publications.

Relations between Ukraine and Belarus certainly became more strained in late August 2017 over the abduction from Belarus of 19-year-old Ukrainian student Pavlo Hryb.  The young man had been tricked into coming to Belarus, from where the Russian FSB seized him and took him illegally to Krasnodar in Russia.  This could not possibly have happened without some degree of collaboration with their Belarusian counterparts (called the KGB).

Pavlo Hryb disappeared on August 24, after going to Gomel, in Belarus to meet a 17-year-old Russian girl from Krasnodar whom he had met on the Internet.  Although his father sounded the alarm immediately, it took 13 days for the FSB to admit that the young man was in Russian custody in a Krasnodar SIZO [remand prison].  Russia has since fiddled the date, claiming that the young man was ‘arrested’ in Russia’s Smolensk on August 25.

The FSB are claiming that Hryb encouraged the 17-year-old schoolgirl to plant a self-made explosive device in a school on June 30, 2017.  He is supposed to have done this by Skype from March 27 to April 13, 2017.  There are no records of those Skype conversations, but there are of the later correspondence between the two adolescents.  From a month after the alleged mention of a plan to commit an act of terrorism, there is not one word about it.  Not before the alleged date chosen, not on the day, nor afterwards.

He has now been in custody for nine months on charges that bear no scrutiny.  The Russian authorities are also ignoring very serious grounds for concern about the young man’s health and an order from the European Court of Human Rights to allow him to be examined by Ukrainian doctors (See  Russia falsifies medical records endangering the life of abducted Ukrainian teenager Pavlo Hryb.

There may, of course, be no link at all between Sharoiko’s arrest in October and his attempts to find answers to important questions about Hryb’s abduction and imprisonment.  There could also be proof that Sharoiko really was guilty of espionage.

The problem is that Belarus’ denial of involvement or knowledge regarding Hryb’s abduction from its territory leaves those questions unanswered.  Its extreme secrecy about the trial of Sharoiko and the latter raise all too many questions about that case also.