Detained in Moscow for demanding that Russia #FreeSentsov 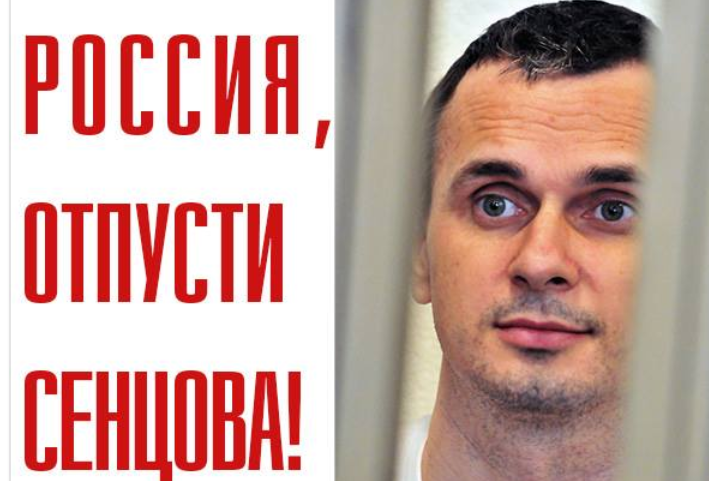 Gleb Mazalov was detained on Pushkin Square in Moscow on 26 May while holding a placard reading: Russia: Free Sentsov!  He was released shortly afterwards, without the promised ‘prophylactic talk’, but told that they were “forgiving him” as this was the first such occasion.  There was a clear threat of trouble if he repeated what was, even by Russia’s repressive laws on peaceful assembly, a totally legal single-person picket that did not require permission.  Nor was this the only such detention on Saturday, with Nikolai Recoubratsky also taken away for such a ‘talk’.

Oleg Sentsov began an indefinite hunger strike on 14 May, with one single demand: that Russia release all its Ukrainian political prisoners held in the Russian Federation.  His family and lawyer Dmitry Dinze are convinced that he will not back down, and he has made it quite clear that he objects to any measures to force-feed him.

Ludmila Sentsova learned of her son’s hunger strike only after his lawyer returned from visiting Sentsov and published his formal statement.  She is deeply distressed and fears that he will die in the Russian prison colony beyond the Arctic Circle where Russia has tried to keep him hidden.

There have been renewed demands for his release from world-renowned filmmakers, many of whom have signed an appeal issued by the European Film Academy and PEN America.  This has been published by Hollywood Reporter, together with a draft letter which all are asked to sign and send to their elected representatives as well as to their own Foreign Ministry and the Russian Embassy.

French President Emmanuel Macron reported at a press conference with his Russian counterpart Vladimir Putin that they had spoken of human rights, and that the imprisonment had been raised of both Oleg Sentsov and Russian film and stage director Kirill Serebrennikov who has been held under house arrest since August 2017.

Putin responded with his standard claim that Sentsov had been sentenced for planning acts of terrorism, and typically also mentioned Ukraine’s recent arrest of Kirill Vyshynsky, the Ukrainian director of RIANovosti Ukraine whom the Security Service accuses of treason, among other things, for his suspected active role in promoting Russia’s annexation of Crimea.

There are multiple grounds for disputing any parity between the cases of Sentsov (or Serebrennikov) and Vyshynsky, and there is effectively no possibility that Putin genuinely believes his assertion about ‘terrorist acts’. The trial of Sentsov and civic activist Oleksandr Kolchenko was described as “absolutely Stalinist” by prominent Russian human rights activist Zoya Svetova.  After the sentences were announced, she and other rights defenders, artists and writers condemned the trial as “ideologically motivated terror” and wrote that:

“The fabricated trial of Sentsov and Kolchenko on charges of terrorism which ended in a monstrous sentence can only be compared to the political trials of the Soviet era. This trial was open and all the circumstances are known to the public. There was no crime, as in, no acts of terrorism.”

Zoya Svetova was among the human rights activists with whom Macron met in Moscow, and she took the occasion to stress that Oleg Sentsov is innocent and a patriot of Ukraine.  She asked Makron to act as intermediary between Russia and Ukraine in order to save Sentsov. She had the feeling that he knows the Sentsov case very well.

Since, despite the serious grounds for all countries to boycott the World Cup in Russia, Makron is planning to attend, it would be excellent if others could reiterate Svetova’s call on him – or other leader – to act as intermediaries with the Kremlin.

This is on Oleg Sentsov’s behalf, yet not only, since Oleg himself has said his hunger strike is until all Russia’s Ukrainian political prisoners are released.  He told Dinze: “If I die before or during the World Cup, there will be publicity that can help other political prisoners”.

The other men had all taken part in one or two Molotov cocktail attacks during the night on the empty offices of two pro-Russian political organizations which had played a major role in Russia’s invasion.  Chyrniy also had plans to blow up a statue of Vladimir Lenin.

These are certainly treated as offences in Russia, but are punished as vandalism or hooliganism, with the person normally getting at most a suspended sentence.

Virtually everything about this case was reminiscent of the worst repressive Soviet methods.  The FSB statement was accompanied by videos of ‘confessions’ by Afanasyev and Chyrniy.  Sentsov and Kolchenko continued to reject all the charges and Sentsov gave details of the torture applied to force him to ‘confess’.  He was openly warned that if he didn’t give the testimony demanded, he would get 20 years and rot in a Russian prison.

Since the only ‘evidence’ came from confessions, it is of critical importance that Chyrniy refused to testify in court, and then Afanasyev took the stand.  He retracted all testimony as having been extracted through torture, and said that every word he had said about Sentsov had been false.  He was shortly afterwards also recognized by Memorial as a political prisoner.

Both men are being held in maximum security prisoners thousands of kilometres from their homes. Russia has also taken the lawless step of claiming that both men ‘automatically’ became Russian citizens, and is denying them access to the Ukrainian consul and their rights under international law.

Further details and information as to how to write to Oleg Sentsov and Oleksandr (Sasha) Kolchenko here;