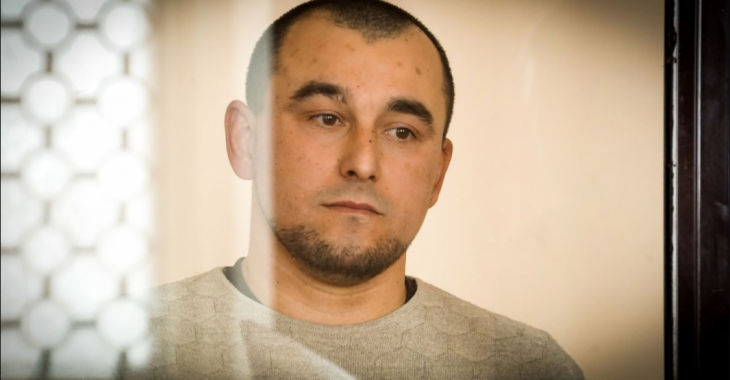 Five months have passed since Ismail Ramazanov was brutally beaten up by enforcement officers in Russian-occupied Crimea who demanded he ‘confess’ to non-existent crimes.  He refused, and told the ‘court’ of the treatment he had received.  Despite evident signs of beating and his being too weak to stand during the hearing, the ‘court’ remanded the 31-year-old Crimean Tatar in custody for allegedly making ‘extremist’ remarks ‘inciting enmity to Russians’.   He remains imprisoned, although no guilt has been proven, and no investigation is being carried out into his supposed ‘extremism’.  It seems the ‘investigator’ Alisa Glukhova received an ‘expert assessment’ of the utterances in question, but has not seen fit to show this to Ramazanov and his lawyer, Alexei Ladin.  This is despite the fact that an ‘expert assessment’ was cited by Russia’s Investigative Committee as the grounds for laying the charges back in January 2018.

Ramazanov calls the charges against him “provocation against him and the entire Crimean Tatar people”.  During the latest appeal against his detention on 31 May, he told the Crimean ‘High Court’  that Crimea was his homeland and the homeland of his ancestors.  They had long struggled to return (after the 1944 Deportation) and there could be no question of him leaving, while the fact that he is a Ukrainian citizen in no way suggests that he would try to hide from the investigators.  He asked that they at least release him under house arrest, as elderly parents needed him to help run the farm with which they earn a living.

Ramazanov is accused of having made the supposedly ‘extremist’ comments on the Zello Internet radio which is banned in Russia. The charges are under Article 282 § 1 of Russia’s criminal code, on inciting enmity or denigrating a group on ethnic grounds or their belonging to a social group.  In this case, the occupation regime is calling ‘Russians’ a social group.

Armed men in balaclavas turned up at the Ramazanov home in the village of Novy Mir on 23 January.  They claimed to have found a Makarov pistol and bullets.  Ramazanov is a devout Muslim and those who know him dismiss any suggestion that he could have been in possession of firearms.

He was taken away and not seen again until the court detention hearing the following day.  Ladin stressed after that hearing that his client had demonstrated real strength in refusing to provide the ‘confession’ they had tried to beat out of him.

Ladin asked the court to call an ambulance and also to organize a medical examination.  The ‘prosecutor’ objected and produced a document claiming that Ramazanov’s health was satisfactory.

All of that was ignored by ‘judge’ Iryna Kirillova from the Simferopol District Court, as was the fact that Ramazanov was having difficulty even staying on his feet. She complied with the ‘prosecutor’s’ request for him to be remanded in custody for a month, until 23 February.  Since then, other ‘judges’ have been just as obliging in turning this into indefinite detention without any clear evidence to back either the charges or the need for Ramazanov to be held in custody.