Council of Europe will share responsibility for grave human rights violations if it gives in to Russia nowCouncil of Europe will betray its human rights mandate by giving in to Russia, Mr JaglandAccountability for international crimes committed in Ukraine between 2014–2018Ukrainian neo-Nazi C14, known for racist and homophobic attacks, gets public funding for ‘patriotic education’Long sentence for murderous ’anti-paedophile’ thuggery in OdessaSt. Petersburg Neo-Nazi Sadist in Donbas – ‘Russia’s Pride and Glory’Putin’s Neo-Nazi HelpersNo Heroes: From skinheads to “anti-paedophile” thugsSelective Anti-fascism
• Topics / Politics and human rights
• Topics / Human Rights Abuses in Russian-occupied Crimea

Juncker should demand Russia stops its aggression, war crimes & repression, not an end to ‘Russia bashing’ 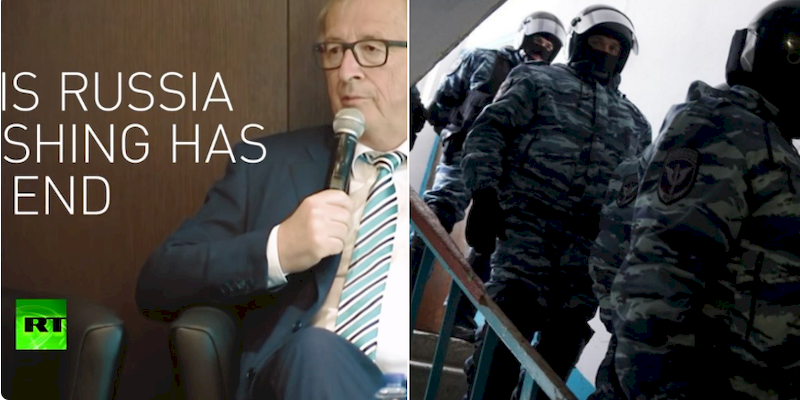 European Commission President Jean-Claude Juncker has demanded an end to what he called “Russia-bashing” and said that it is time to “reconnect with Russia”.  While specifically stating that the EU “would never accept what Russia did with Crimea and eastern Ukraine”, he did not explain exactly what “Russia-bashing” is.  He did make it alarmingly clear, however, that it is Russia’s size and importance that make him want to “reconnect”.

Those key points were, unsurprisingly, broadcast by the Kremlin-funded ‘RT’ [Russia Today].  It was a pure gift for RT which normally has to turn to commentators known for their pro-Kremlin position or manipulate reports in order to push the Kremlin’s narrative about Russia’s annexation of Crimea, military aggression in eastern Ukraine; the downing of MH17; interference in the US presidential elections; use in the UK of nerve gas against former spy Sergei Skripal and his daughter; and much more.   Here they could simply broadcast Juncker’s words, with their own explanation of what he had been referring to.  RT ‘explained’ his not so “conciliatory” words about Ukraine, for example, as follows:

“He said the EU would never accept “what Russia did” to Ukraine and Crimea, referring to the violent 2014 coup in Kiev that brought the current Ukrainian government to power, and the subsequent referendum held in Crimea, which resulted in over 90 percent support for reunification with Russia.”

The ‘explanation’, as is so often the case on this lavishly funded Kremlin mouthpiece, contains provable lies and misrepresentation of the facts.  It was largely Russia’s use of propaganda and disinformation from 2014 onwards that prompted the creation of a crucial, yet hopelessly underfunded, East Stratcom Taskforce and its EU vs Disinfo website.

Would Juncker consider criticism of Kremlin-funded propaganda channels and work on monitoring their manipulation of facts or preventing them deliberately misleading audiences abroad to be “Russia-beating’?  Although Ukraine has probably suffered most from Russian warmongering propaganda, its claims of non-existent anti-Semitic pogroms and an invented ‘Odesa massacre’, there is plenty of evidence of the Kremlin trying to manipulate and use Europe’s refugee crisis.

Juncker’s proposal to put an end to “Russia-beating” came just months after:

Russia’s believed use of the Novichok nerve agent in an attack on Sergei and Yulia Skripal in the centre of Salisbury, UK.  Russia has denied involvement, just as it has rejected accusations over the 2006 murder in London with the use of radioactive Polonium of former FSB agent Alexander Litvinenko. An official UK inquiry found in January 2017 that Litvinenko had probably been murdered on Putin’s personal orders.

US and other western intelligence agencies have all agreed that Russia directly interfered in the US Presidential elections.  There is also considerable evidence indicating its interference in the elections of several EU states, as well as in an attempt at a coup in Montenegro.  This is not to mention the farcical presidential elections which gave the formal go-ahead to Putin’s two-decade ‘presidency’ and which were illegally held in occupied Crimea.

A UN report in March 2018 stated that Russia’s use of unguided bombs in a densely populated area in Syria "may amount to the war crime of launching indiscriminate attacks resulting in death and injury to civilians."   Russia’s claim to be fighting the so-called Islamic State in Syria was rightly challenged from the outset, with all evidence suggesting that it was helping the regime of Bashar al-Assad destroy his opponents.

Are protests over the above to also be classified as “Russia-bashing”?

If so, there is a lot more to come since Juncker, Merkel and Makron have all extended a hand to the Kremlin just days after publication of the Joint Investigation Team’s conclusions regarding the downing of MH17 on 17 July 2014.   This found that “the Buk missile which downed Malaysian airliner MH17 on 17 July 2014 came from the 53rd Anti-Aircraft Missile brigade which is a unit of the Russian army from Kursk in the Russian Federation”.   This is only one of the reasons for believing that Russia will evidentially be held to answer at the International Criminal Court at the Hague.  It is currently also facing proceedings brought by Ukraine over its discrimination of Crimean Tatars and ethnic Ukrainians in occupied Crimea and its violation of the International Convention for the Suppression of the Financing of Terrorism though its active arming, manning and financing of the militants in occupied Donbas.

If such court proceedings are still in the fairly distant future, the calls to ‘reconnect’ with Russia are also rendered incomprehensible by violations that  are taking place virtually every day in the Kremlin-backed ‘republics’ in Donbas, and in Russian-occupied Crimea’.

Just saying “the EU would never accept what Russia did with Crimea and eastern Ukraine” and then passing on to re-establishing good relations makes a farce of all the values which the EU espouses.  Russia did not just illegally annex Crimea four years ago.  It has since totally eroded fundamental rights and liberties in occupied Crimea.  The number of political prisoners is rising by the week, and Russia is noticeably targeting civic journalists and activists whose voices have been so vital given the total elimination of independent media on the peninsula.  Server Mustafaev, who was arrested on 21 May, is just one of several members of the Crimea Solidarity initiative formed to help political prisoners and their families.  That, and his insistence on reporting the frequent armed searches and arrests of other Crimean Tatars, are almost certainly the reason why he is now facing a sentence of up to 20 years’ imprisonment for alleged involvement in Hizb ut-Tahrir, a peaceful organization which is legal in Ukraine.  There are already 29 men, including human rights activist, Emir-Usein Kuku, facing huge sentences purely for their faith and, often for their human rights or civic activism.  They are among over 70 Ukrainians whom Russia has already imprisoned on fabricated charges.

Russia is flouting the International Court of Justice by continuing its extraordinary ban on the Mejlis, or self-governing body, of the Crimean Tatar people, as well as the Geneva Convention by forcing young Crimeans to serve in the occupying regime’s army.

If up till now, religious persecution has been mainly of Crimean Muslims, this is set to change since Russia is increasingly using its ban on the Jehovah’s Witnesses to arrest believers and effectively steal their property.

Russia is not putting an end to its military aggression against Ukraine in Donbas, with ensuing military and civilian deaths and ongoing destruction.

The EU should be intensifying its pressure on Russia over such violations of fundamental human rights, not calling for an end to so-called “Russia-bashing”.