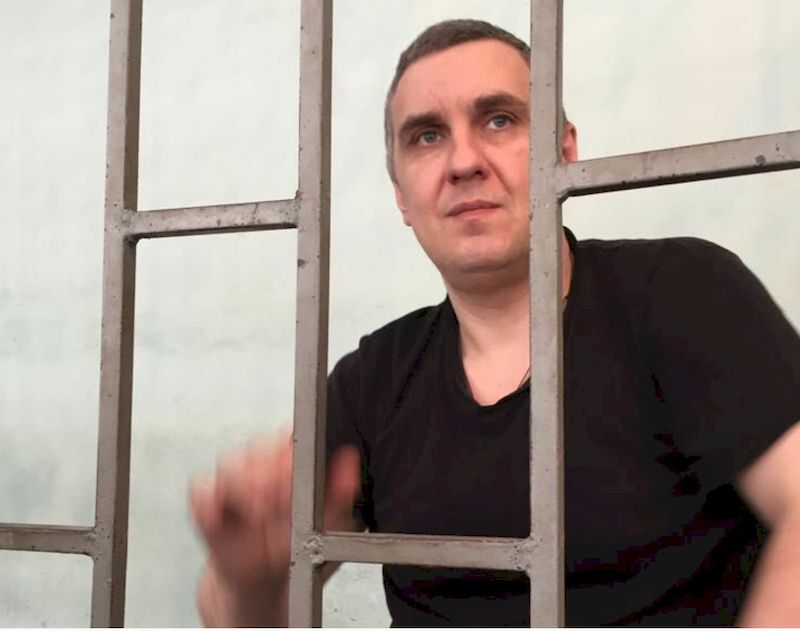 Russia’s FSB are most brutal with those political prisoners who refuse, even under torture and threats, to ‘confess’ to non-existent crimes.  This was seen with Ukrainian filmmaker Oleg Sentsov whose FSB torturers warned him from the outset that he would get 20 years and rot in a Russian prison, if he didn’t provide the ‘testimony’ they demanded.  He refused, was sentenced to 20 years and sent to the harshest and most isolated prisons in the Russian Federation.  It appears likely that the same is planned for Yevhen Panov, the Zaporizhya driver who was seized and tortured in August 2016, and then held for two months without access to a lawyer.

Panov turns 41 on 6 June, his second birthday held in the Simferopol SIZO [remand prison] in occupied Crimea.  His brother Ihor Kotelyanets has spoken of the ways Russia has tried to force Panov to cooperate and of the farcical ‘trial’ which began in April this year.

So far 46 prosecution ‘witnesses’ have been questioned, of whom Kotelyanets believes, some 80% are likely FSB employees.  He says that about half of them are ‘secret witnesses’.  Some of the others have been brought to ‘court’ merely to testify what kind of damage could have been caused by the allegedly planned acts of sabotage.

There has been intense pressure on his brother during the almost two years that he has been imprisoned.  Kotelyanets explains that Panov was directly told that if he made a deal with the investigators and ‘confessed to being a Ukrainian terrorist’, they’d get him a 5-year sentence somewhere close to Ukraine.  If not, he’d get a sentence like Sentsov’s, of 20 years and be sent very far away.

“Yevhen did not agree to any deal and we therefore fear that he’ll be sentenced to the maximum 20-year term”.

In fact, nothing is proven, and a telling detail is that of the four men accused of involvement in a supposed plot which they were shown on Russian TV ‘confessing’ to, one - Redvan Suleymanov – ended up accused of something only slightly linked to the original ‘confession’, while Volodymyr Prysich was sentenced on May 18, 2017 to 3 years’ imprisonment on the totally different charge of possession of a narcotic substance.  Like Panov and Zakhtei, he asserts that he gave his original ‘confession’ under torture.