Sharp rise in far-right violence in Ukraine with police failing to react adequatelyFar-right thugs attack Ukrainian film festival DocuDays human rights eventsUkrainian ‘C14’ Neo-Nazis openly offer to act as thugs for moneyTrial begins of two C14 far-right activists accused of killing controversial journalist Oles BuzynaUkrainian police disturbingly passive during far-right attack on Kyiv gathering in memory of Markelov & BaburovaSo what will “New SBU” be?Russia threatens criminal prosecution over calls to impose sanctions ECHR finds Ukraine breached the right to life over Maidan killing and multiple other violations Zelensky gives top post to official involved in storming of Maidan 2020: There was no worse year in the realm of human rights after the Revolution of DignityBandera. An Invitation to a Calmer ConversationA brief description of the KHPG strategic litigations in July–December 2020Russia uses Covid-19 as excuse to persecute Crimean Tatar political prisoner’s motherNo end to Russia’s revenge for Ukraine’s Revolution of DignityFormer political prisoner takes Russia to court over torture conditions in Crimean prisonOpinion on the political motives of criminal persecution and violation of human rights in the case of Sergiy PashinskyMother of Crimean Tatar prisoner of conscience prosecuted for solitary picket in his defenceFrom lawyer for pro-Russia Medvedchuk party to running Maidan cases. Disturbing new top appointment in UkraineAppallingly racist attempt to evict Ukrainian Roma community from village in Kharkiv oblastFatal attack on the Vilshany Roma community reaches the court, but not as a hate crime
• Topics / Interethnic relations
• Topics / Law enforcement agencies 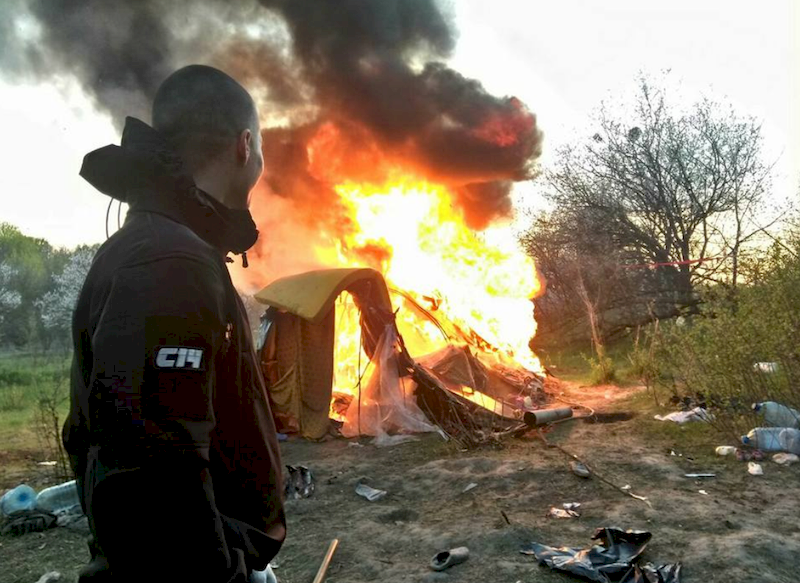 ‘C14’, a neo-Nazi group involved over recent months in anti-Roma, homophobic and other attacks in Ukraine, has become one of the recipients of Ministry of Youth and Sport grants, together with an organization linked to the far-right Svoboda party.  The news was first reported by Hromadske Radio a day after the authors of a Freedom House report warned of a sharp increase in political violence from precisely such radical groups in Ukraine and of the danger they pose for Ukrainian democracy.

Three organizations were successful in the competition for ‘national-patriotic education projects’.  ‘Educational Assembly’ [«Освітна асамблея»], founded by the head of C14, Yevhen Karas; ‘C14 Sich’, founded by Volodymyr Karas, who shares the same patronymic, surname and address as the head of C14; and Holosiyiv Hideout [«Голосіївська криївка»], whose founders include several members of Svoboda.

Three events by ‘Educational Assembly’, as well as a C14 Sich children’s camp will all get 440 thousand UAH (a little over 14 thousand euros), while Holosiyiv Hideout will receive 760 thousand UAH (nearly 25 thousand euros) for four festivals.  The successful projects included ‘National-patriotic education as guarantor of Ukraine’s information security’, a nationwide distance learning centre for such national-patriotic education, and the use of historical simulations as a means of popularizing Ukraine’s historical heritage.

Lyakhovych asserts that the competition was held in full accordance with legislation.  He claims that the commission cannot analyse the ideology of the organizations which put forward their proposals, and that they merely assess whether the projects meet the priorities outlined for the competition as per the relevant Cabinet of Ministers resolution from 12 October 2011.

Any NGO that has existed for over two years can apply, and while Lyakhovych says that as a citizen, he understands the concern about support for destructive movements, this is not something he, as a civil servant, can influence.

In fact, some scepticism may be justified here, especially given that Lyakhovych himself has a background in the UNA-UNSO [Ukrainian National Assembly – Ukrainian People’s Self-Defence], an extremely far-right movement with views similar to those espoused by Svoboda and C14.

According to this logic, movements whose members do not conceal their antagonism to members of ethnic, religious or sexual minorities could come up with an educational project which would then be allocated taxpayers’ money. This could lead to camps, etc, being run by activists who both espouse and practise intolerance towards minorities and other groups of Ukrainian society.

C14, Svoboda and several other far-right organizations (National Corps, National Druzhyna vigilante groups, for example) have tried to present themselves over recent years as defending Ukraine against ‘separatists’, as promoting ‘law and order’ and as fighting corruption.

Ukraine has been facing the gravest of threats from Russia over the past four years, which can make it difficult to counter the ‘patriotic rhetoric’ that such movements use.  This is especially frustrating given the multiple issues with such claims, and with the methods these far-right movements use against Ukrainian citizens either on racist grounds, or because their views, sexual orientation or style of life are not to their liking.

On January 19, 2018, members of C14 and other far-right groups prevented the traditional remembrance gathering in Kyiv to honour Russian rights lawyer Stanislav Markelov and Novaya Gazeta journalist Anastasia Baburova, murdered in Moscow in 2009 by members of a far-right nationalist group. The claim that this had anything to do with ‘fighting separatism’ was simply offensive.

The police on that occasion detained only people who had come for the remembrance gathering, and did nothing to prevent the illegal obstruction of a peaceful gathering.

It seems likely that louts from these far-right groups were responsible for the vicious attack on a young Briton, Liam Anthony Tong that same afternoon.  Although the young man had a hood on (concealing his brightly-coloured hair), he had facial piercings which would make him a fairly typical target for such attacks..

There have been four attacks on Roma camps in different parts of Ukraine since April this year.

The police initiate criminal proceedings, and then nothing more is heard.

C14, National Corpus and the National Druzhyna vigilante units are often present inside the courtroom and outside high-profile court hearings. It has to be said that they do often reflect widespread concern, for example, over the initial suspended sentence passed on Yuri Krysin, a known criminal and titushki (hired thug) leader involved in the killing of Maidan journalist Vyacheslav Veremiy.

Their behaviour is often openly lawless. On May 4, 2018, C14 activists seized Rafael Lusvarghi, a Brazilian who not only fought for the Kremlin-backed militants in Donbas, but also provided propaganda to recruit other militants.  A Ukrainian court had sentenced him to 13 years’ imprisonment, however this sentence had later been quashed, and the case sent back for retrial.  Lusvarghi had been spotted by an RFERL journalist living at a Moscow Patriarchate Orthodox Monastery outside Kyiv.  The C14 activists grabbed him and took him by force to the SBU [Security Service].  Whatever one may think of the authorities’ actions with respect to Lusvarghi’s prosecution, the C14 behaviour was highly questionable, and probably criminal.

The same is true of the C14 blocking of the Kyiv-Pecherska Lavra in Kyiv on 8 January 2018 and damage to a car which tried to get through.

In claiming that the Ministry of Youth and Sport was powerless to prevent far-right racists and homophobes from winning grants for patriotic education programmes, Mykola Lyakhovych mentioned the need for a mechanism to be added to the above-mentioned Cabinet of Ministers resolution. In the absence of such, the only available methods for challenging such competitions is to appeal to the Prosecutor General’s Office or the Justice Ministry, and implement proceedings and an investigation into the organization’s illegal activities.

The SBU were, in fact, forced by the court on 19 May to initiate criminal proceedings against C14 leader Yevhen Karas over the treatment of Lusvarghi.  This was on the application of Lusvarghi’s lawyer, and there is nothing to indicate whether a real investigation will follow.  It is doubtless the lack of firm police action, identified in Likhachev’s report that explains the recent upsurge in political violence and attacks on certain groups by C14 and other far-right groups.

Criminal proceedings are important, but will not let the Ministry of Youth and Sport off the hook.  You need only look to the large number of Ukrainians who feel understandably threatened by C14 and their ilk and recall C14’s offer to provide head-bashing ‘services’ for money, to understand that there were and remain compelling grounds for withdrawing these shockingly misallocated grants.