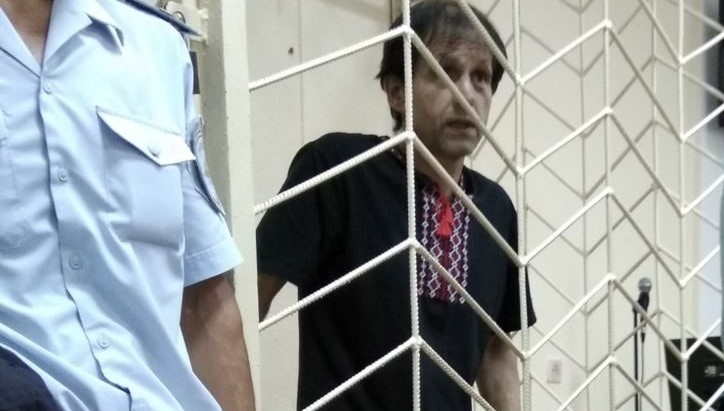 Volodymyr Balukh announced in ’court’ on 23 June that he will now be refusing absolutely all food in protest at his ongoing persecution in Russian-occupied Crimea.  47-year-old Balukh, who is looking gaunt and frail, has long complained of chest pains and there are very serious grounds for fearing for his life

The Ukrainian political prisoner has been on hunger strike since 19 March 2018, but had since the 25th day been taking the minimum amount of food needed to prevent the occupation authorities from applying force-feeding.  This symbolic amount of food was used by the Russian-controlled prison and court to ignore his physical state after 96 days of total or partial hunger strike, and to not provide the medical care he urgently requires.

Over recent weeks, he has come under even greater pressure in the SIZO [remand prison] in Simferopol with night searches, refusal to allow him visits from relatives, and transfer to a cell for 18 prisoners [which may well hold more than that number]. Lawyer Nikolai Polozov rightly stated recently that this treatment of Balukh could only be called torture.  With no other means of protest available, Balukh has now said that he will be only drinking water.

Balukh’s own lawyer Olga Dinze believes that the increased pressure on Balukh may be because the defence’s application for his early release on the first politically-motivated charges is due shortly. She assumes that the occupation regime is trying to ensure that he gets a negative reference to use as an excuse to not release him.

Balukh was arrested on December 8, 2016 after an unexplained search which allegedly found 90 bullets and several TNTl explosive devices in his attic.  He had no record of violence and the constant searches and harassment he had faced since Russia’s invasion of Crimea for his openly pro-Ukrainian position and the Ukrainian flag which he refused to remove from his roof made it inconceivable that he could have held anything illegal in his home.  This was one of the many reasons why the Memorial Human Rights Centre almost immediately declared him a political prisoner.

Nothing about Balukh’s persecution left any cause for doubt.  His arrest came nine days after he nailed a plaque to his home, renaming it No. 18 “Heroes of Nebesna Sotnya St’ in memory of the over 100 Maidan activists who were killed during Euromaidan.  He rejected demands from the head of the local council to remove it.

The falsification was equally unconcealed.  The officer who had supposedly ‘found’ the ammunition had not been on duty that day and could not name the individuals who had instructed him to be present or their position in the law enforcement bodies. He also had no explanation for why he had also climbed onto the roof and removed the Ukrainian flag flying there.

The ammunition which the men, wandering in some unclear capacity around the Balukh home, allegedly found, had no fingerprints or other traces to indicate that any member of the family had touched them.  Most importantly, the ammunition in question was on the official register of weapons and ammunition in Barnaul, the Altai region of the Russian Federation, and was produced back in 1989.   Neither Balukh nor his common-law wife had been allowed to see what was going on, with the officer who effectively held Balukh prisoner during the ‘search’ unable to give a sensible reason for doing so.

During the appeal hearing on October 2, the High Court in occupied Crimea revoked the sentence, having accepted the submission from Olga Dinze that Bedritskaya should not have been the judge, as she had been involved in earlier (equally flawed) cases against Balukh.

Balukh is now on ‘trial’ again, with the charges no less absurd.  He is accused of ‘destabilizing the activities of the detention unit’ through an alleged attack on an officer.

The prosecution claims that Balukh had, on 11 August 2017, attacked the head of the temporary detention unit in Razdolne,  Valery Tkachenko and then poured a cleaning substance over him.  Balukh had repeatedly complained that Tkachenko was taking every opportunity to harass and insult him, and the defence is adamant that video footages demonstrates that the circumstances of the incident on 11 August were quite different.  Balukh was standing with his face to the wall and surrounded by police officers.  Tkachenko walked past, and, using his elbow, pushed Balukh in the back.  Balukh was pushed against the wall, almost hitting his head, and instinctively lashed out, hitting Tkachenko in the stomach.  That resulted in a conflict with mutual abuse, after which Tkachenko can be seen lashing out and hitting Balukh once more.    The video later shows Tkachenko going into Balukh’s cell, where the latter says he barraged him with some serious insults.  This appears to have been a continuation of a barrage of insults directed at Balukh’s elderly mother, other relatives, etc. and Balukh reacted by directing a canister with some cleaning substance in Tkachenko’s direction.  The lid unfortunately came off and the substance spilled on Tkachenko.

The defence has learned that it is Russia’s Investigative Committee that has insisted on concocting charges of ‘destabilization’ out of any extremely minor incident.

Russia is using its repressive machine against Ukrainians in Crimea who have remained true to Ukraine and make their opposition to Russian occupation clear.  They have failed to break Volodymyr Balukh, but he is in grave physical danger.

Please approach politicians and ask them to help put pressure on Russia to release Volodymyr Balukh, Oleg Sentsov and the over 70 Ukrainians it is holding prisoner on politically-motivated charges.