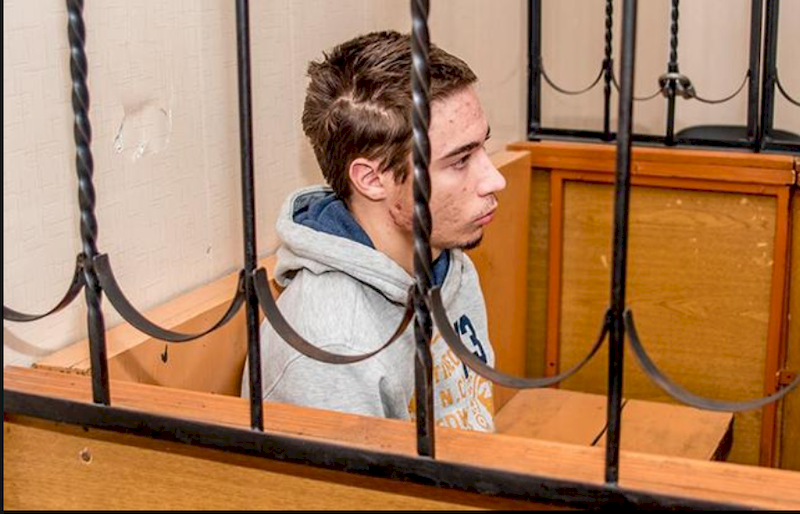 Pavlo is turning 20 on 1 July in a Russian SIZO [remand prison].  Please write to him! [scroll to the bottom for the address].

Russia’s FSB are preventing imprisoned Ukrainian student Pavlo Hryb from receiving vital medication, despite being fully informed of the rare blood circulation disease which the young man suffers from and the grave risk to his life posed by lack of proper medical care.  Hryb has also not been passed any letters from Ukraine at all, with the ensuing information vacuum presumably part of a policy aimed at breaking the lad as the beginning of his  ‘trial’ in Rostov looms on 2 July.

Ihor Hryb told Radio Svoboda back in April that psychological pressure on his son had intensified since the beginning of 2018, with this even extending to restricting the food products that his mother tried to have passed to him.  On June 4, it was reported that the Russian financial authorities had even blocked transfer of money aimed at ensuring that Hryb could buy basic items in the prison shop,  These would include drinking water and healthier food products which Pavlo’s condition make absolutely essential.  His father explains that any build-up of acid in the stomach increases the danger of haemorrhaging, which would occur in conditions where literally nobody was competent to help the young man.  The medical specialist in Ukraine who has been treating Hryb since childhood, has stressed that his patient needs a portosystemic bypass as part of his treatment.  He had been scheduled to have such an operation in September last year, but had by then been abducted and taken illegally to Russia.

It is likely that the FSB had no idea about Hryb’s state of health when they intercepted conversations between the then 19-year-old student and a 17-year-old Russian girl in her last year at school, and decided to use her to abduct Hryb from Belarus.  They do, however, now know, as does the European Court of Human Rights which has ordered Russia  to provide information about Hryb’s state of health, and to allow Ukrainian doctors to examine him.

Russia has ignored Strasbourg and is effectively falsifying the medical records in order to not acknowledge a problem, with this directly placing the young man’s life in jeopardy.  His mother has been prevented from seeing him and, since independent doctors have not been admitted, there is no medical assessment of his state of health. As his lawyer Marina Dubrovina notes, there cannot have failed to be a deterioration given the lack of medication and proper food demanded by his medical condition.

She asks anybody who can to come to the court hearings in Rostov.  These should begin in two or three weeks, hopefully in an open court, after the closed preliminary hearing on 2 July.

Hryb, then a 19-year-old first-year student in the Philosophy Faculty of the Kyiv-Mohyla Academy, disappeared on August 24, 2017, after going to Gomel, in Belarus to meet the above-mentioned 17-year-old whom he had met on the Internet.  His father sounded the alarm almost immediately, although Russia’s FSB took 13 days to admit that the young man was in Russian custody in a Krasnodar SIZO [remand prison].  Russia has since fiddled the date, claiming that the young man was ‘arrested’ in Russia’s Smolensk on August 25.

Had Hryb really been on the international wanted list, as his father was told by the Belarusian border guards, he should have been detained at the Ukrainian – Belarusian border, with proper procedure set in motion.  Instead, he passed into Belarus with no difficulty, and was seized by unidentified individuals who pushed him into a car.  He could not have crossed from Belarus into Russia without the Belarusian side being at least aware what was happening, since this was assuredly against the young Ukrainian’s will.

The young girl told Ukrainian journalists after it became clear that Pavlo had been abducted, that she had been threatened with prosecution herself by the FSB if she didn’t cooperate by tricking Hryb.

It seems likely that the FSB have used their total access to the VKontakte social network, and are now fabricating ‘terrorism charges’ against Hryb based solely on private correspondence on social media.  None of this ever went beyond empty talk between two very young people, one of whom was underage at the time.  As Dubrovina stresses, there is no ‘crime’ as such, merely adolescent chat, with this doubtless the reason why the FSB has put so much pressure on Hryb , Although the ‘trials of Oleg Sentsov, Oleksandr Kolchenko, Stanislav Klykh and others have shown that Russian courts provide the sentences required of them, however gross the falsification, the FSB uses any means, however illegitimate to extract ‘confessions’ and thus ensure fast-track and low-publicity convictions.

Russia will hopefully begin passing on letters now that the ‘trial’ is beginning, and even if it doesn’t, letters also send an important message to Russia that its treatment of the young Ukrainian is under international scrutiny.

Birthday greetings (his birthday is 1 July, but belated greetings will also mean a lot to him)