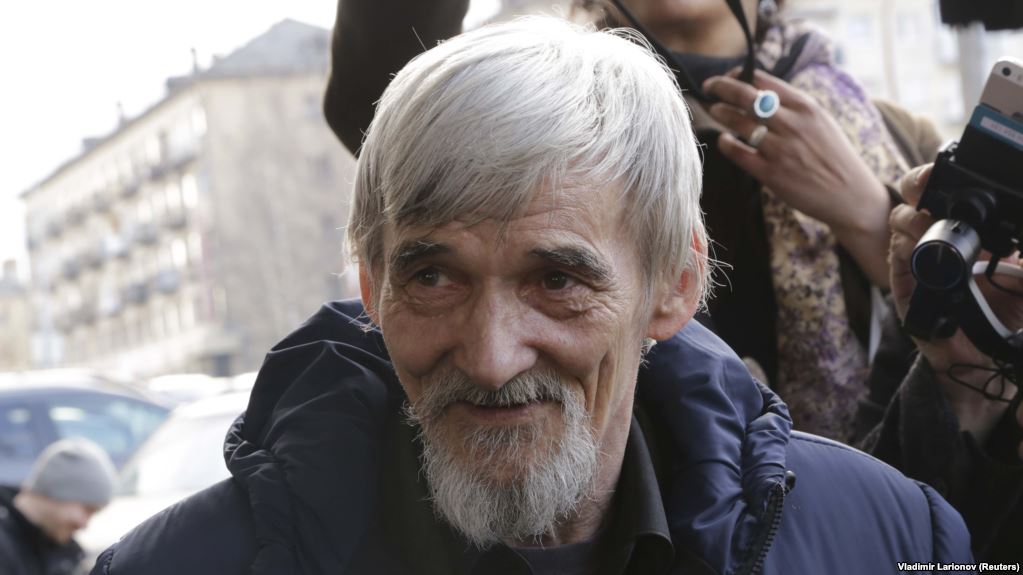 Russia’s Investigative Committee has initiated new and serious criminal proceedings against Yuri Dmitriev after its first trial of the world-renowned historian and head of the Karelia branch of Memorial failed abysmally.  The new charges are rendered most unconvincing by the fact that they were not brought at the time of Dmitriev’s first arrest in December 2016, although they also pertain to his treatment of his adopted daughter. There are quite simply no grounds for the new charges which suggest a dangerous new escalation in the repressive tactics being used to persecute the 62-year-old historian who has devoted most of his life to uncovering the mass graves of the victims of the Soviet regime and identifying perpetrators of Stalin’s Terror.

Dmitriev was arrested on June 27, less than two weeks after a court revoked his acquittal on the first evidently flawed charges and ordered a retrial.  He was stopped by police in Karelia after leaving Petrozavodsk to visit the grave of a friend who died just before his first arrest. The formal pretext was then given as being that he had left Petrozavodsk in breach of the signed undertaking to remain in the city he gave when released from custody in January this year.  In fact, the manner in which NTV, one of Russia’s worst propaganda media, appears to have had a photographer at the scene and swiftly reported that he had been stopped while trying to flee the country, arouses the suspicion that this may all have been part of an operation to get Dmitriev imprisoned again.

Both Dmitriev’s daughter Katerina Klodt and his lawyer Viktor Anufriev rejected the claims made by NTV.  Klodt told Novaya Gazeta that her father had been stopped in Olonets by police on the instruction of investigator Maxim Zavatsky and taken to a  police holding unit.  The friend with him rang Klodt at 20.30, at the same time as the NTV report claiming he was trying to get to Poland.  This was nonsense, Anufriev said, and pointed out that even if he had wanted to, Dmitriev could not have been leaving the country as he has no passport.  NTV also falsely claimed that Dmitriev had taken his dog to a dog’s home before setting off on this alleged ‘flight’.  Klodt says that the dog is at home, being kept indoors as she’s on heat.

The reports in media loyal to the Kremlin make the point of Dmitriev’s prosecution very clear.  All mentioned the charges  against him, without noting that these were effectively demolished by leading specialists, and condemned as politically motivated both within Russia and abroad.

Since the Investigative Committee is now planning to charge Dmitriev with ‘violent acts of a sexual nature’, also against his adopted daughter, it is worth stressing that no such crimes were even once suggested before, although Dmitriev was in custody, and a criminal investigation underway for many months before the ‘trial’ began.

During his final address to the court, Dmitriev simply reiterated his innocence and showed a very touching card sent to him by Natasha.  The young girl had obviously taken a lot of trouble with the card, which said how much she loved and missed her father.

Worth noting that Anufriev explained then that the letter had been cited because of the attempts to push the idea that Dmitriev had psychologically damaged the young girl.

There had effectively never been any suggestion of sexual abuse.

It was therefore a huge relief when, on 5 April 2018, Petrozavodsk City Court, Judge Marina Nosova acquitted 62-year-old Dmitriev of the main indictment, but convicted him of a third much less serious charge (pertaining to a part of a gun which Dmitriev had found on the street and taken inside to ensure children didn’t play with it).

That ruling was appealed by the defence, who demanded a full acquittal.  Appeals were also lodged by the prosecutor and, formally, by Natasha’s grandmother

Rulings in political cases in Russia are generally understood as being decided at a higher level than the courtroom, with acquittals virtually unheard of.  It is possible that the initial acquittal was issued to deflect public attention to the trial, and never intended as more than an interim measure.  There were certainly no grounds at all for the decision by the Karelia High Court on 13 June to revoke all parts of the original verdict and to send the proceedings back for ‘re-trial’ under a different judge. .  The sole arguments provided during the appeal hearing was this appeal from the grandmother, who had left the child in a children’s home and had not seen her for many years, and excerpts from questioning of the child which was supposed to demonstrate a disturbed psychological state (‘suicidal moments’).

These new charges are a chilling indication that the Russian authorities are not willing to let go of their political persecution of Dmitriev.  They are also still further proof of Anufriev’s words that the main victim of this whole case had been “this little girl, who was pulled away from her normal environment, from her family, wrenched away from the person who has become close, who has become her father”.

Natasha was immediately taken from Dmitriev’s family to a grandmother she didn’t know, where she has been ever since.  If there had been any sexual abuse, it is simply inconceivable that the Investigative Committee would have only brought it up after their grossly fabricated trial of a respected historian was exposed in all its politically motivated squalor.

This second ‘trial’, like the first, will almost certainly be held behind closed doors, with it difficult to assess what kind of pressure has been brought to bear on Natasha or her grandmother.   It is vital that the case continues to receive international attention.