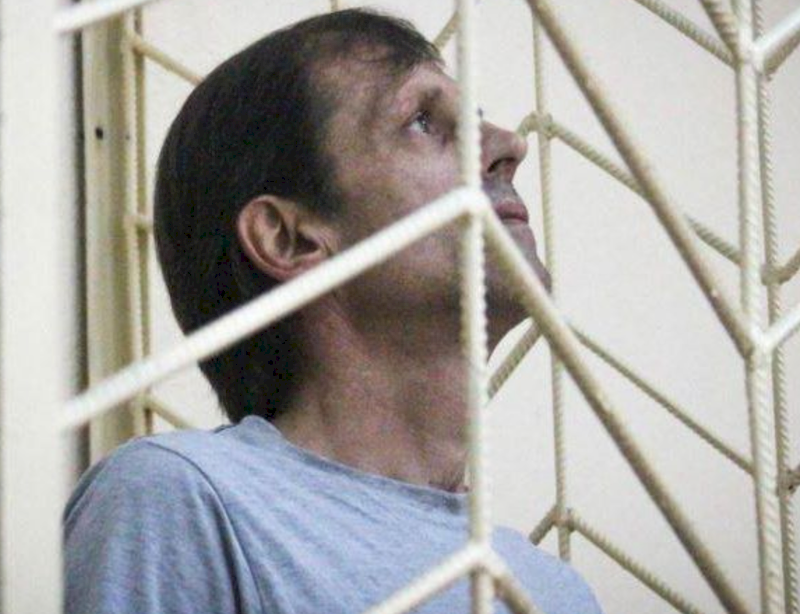 A ‘court’ in Russian-occupied Crimea has sentenced Ukrainian political prisoner Volodymyr Balukh to an extra three years’ imprisonment on charges as overtly fabricated as those used to originally arrest him.  The defence has reason to believe that the Russian Investigative Committee is behind the decision to add to the initial three and a half year sentence widely seen as linked not with any crime, but with the Ukrainian flag that Balukh had refused to remove from his home.

The sentence passed on 5 July 2018 by ‘judge’ Tetyana Pyrzhalo from the Razdolne District Court is effectively to five years since the new three-year sentence has been added to the two years remaining of the first sentence, with both sentences now to be served in a medium-security prison colony (as opposed to the low-security prison he was first sentenced to).  The official charge was of ‘disorganizing the work of a detention unit’ under Article 321 § 2 of Russia’s criminal code.   This new ‘conviction’ is added to the two years remaining of the first three and a half year sentence passed in a ‘remake trial’ on 16 January 2018.  Prosecutor’ Dmitry Nikolaevich Shmelev had formally demanded a four-year sentence.

Neither in this case, nor in other political prosecutions, are the ‘prosecutor’ or ‘judge’ making any decisions themselves.  This does not, however, absolve them of responsibility for following orders and imprisoning an innocent man on manifestly absurd charges.

47-year-old Balukh has been looking dangerously gaunt since he resumed his full hunger strike on 23 June.  He had rejected any food earlier, from 19 March 2018, but was persuaded on the 25th day of hunger strike to take an absolute minimum to prevent the occupation authorities to using force-feeding.  He has now had virtually no nourishment at all for well over 100 days, and is clearly very weak.

He is very appreciative of the enormous support for him, including the letters he has received, and the help given his elderly mother, and passed on a letter of thanks.  In it he also speaks of his gratitude to God, his parents and his people for all that he has received.  He writes that the Kremlin, enraged by Ukrainians’ unwavering resistance and refusal to be broken, has sought to grab as much territory from Ukraine as it can.   in the face of Russia’s territorial greed.

Russia’s power on occupied territory, and where-ever it rules, he says, “is held together by total lying propaganda, intimidation and brutal reprisals about dissidents”.

The “pathologically untruthful Kremlin regime”, he is convinced, fears the voice of Truth, more than guns and ballistic missiles.

“This is indisputably demonstrated by the farce, acted out by Ukrainian traitors, together with Kremlin lackeys, over my third ‘conviction’ over the past two and a half years.

The image of general prosperity created by the Moscow propagandists falls apart when there is understanding of how they paint it up.  Hundreds of thousands of Crimeans are forced to be silent and await better times by show prosecutions of those unable to accept the degradation. “

He ends by quoting poet and writer Lina Kostenko who, in one of her books, writes: “It is not for our reason to fathom how God appears.  I know only that He who set my heart in motion, is He who also launched the Universe”

“My heart beats in the heart of the Ukrainian Universe.  Crimea is Ukrainian!  Glory to Ukraine!  Yours truly, Volodymyr Balukh”

Balukh’s problems with the FSB and Russian-controlled police began fairly soon after Russia’s invasion and annexation of Crimea, with the Ukrainian flag flying over his home evidently one of the reasons.

The only difference over the following years has been in the severity of the repressive measures applied, not in the charges.  These were absurdly trumped-up from the outset.

On earlier occasions, for example, the FSB claimed that they were looking for a stolen box from a tractor and that he had been in a café in Razdolne, drunk, and offered to sell the box to a stranger, giving his full name and address.  The story was particularly implausible since Balukh actually owns two such tractors.

Some of the more idiotic charges would be removed, though the administrative prosecutions and harassment continued. Details here:  Sentenced twice for pro-Ukrainian position in Russian-occupied Crimea.

During the appeal hearing on October 2, the High Court in occupied Crimea had revoked the original sentence, having accepted the submission from lawyer Olga Dinze that Maria Bedritskaya should not have been the judge, as she had been involved in the earlier administration prosecutions of Balukh.

The new ‘prosecution’ was heard in the same Razdolne District Court from 15 May 2018, with it claimed that  Balukh had, on 11 August 2017, attacked the head of the temporary detention unit in Razdolne,  Valery Tkachenko and then poured a cleaning substance over him.  Balukh had repeatedly complained that Tkachenko was taking every opportunity to harass and insult him, and the defence is adamant that video footages demonstrates that the circumstances of the incident on 11 August were quite different.  Balukh was standing with his face to the wall and surrounded by police officers.  Tkachenko walked past, and, using his elbow, pushed Balukh in the back.  Balukh was pushed against the wall, almost hitting his head, and instinctively lashed out, hitting Tkachenko in the stomach.  That resulted in a conflict with mutual abuse, after which Tkachenko can be seen lashing out and hitting Balukh once more.    The video later shows Tkachenko going into Balukh’s cell, where the latter says he was subjected to a torrent of serious insults.  These, like earlier harassment, had targeted Balukh’s elderly mother, other relatives, etc. and Balukh reacted by directing a canister with some cleaning substance in Tkachenko’s direction.  The lid unfortunately came off and the substance spilled on Tkachenko.

All of this warranted, at most, a disciplinary penalty.  Instead, criminal charges were brought, with the aim here, as with the first prosecution being quite simply, and virtually openly, to imprison the Ukrainian farmer and activist. 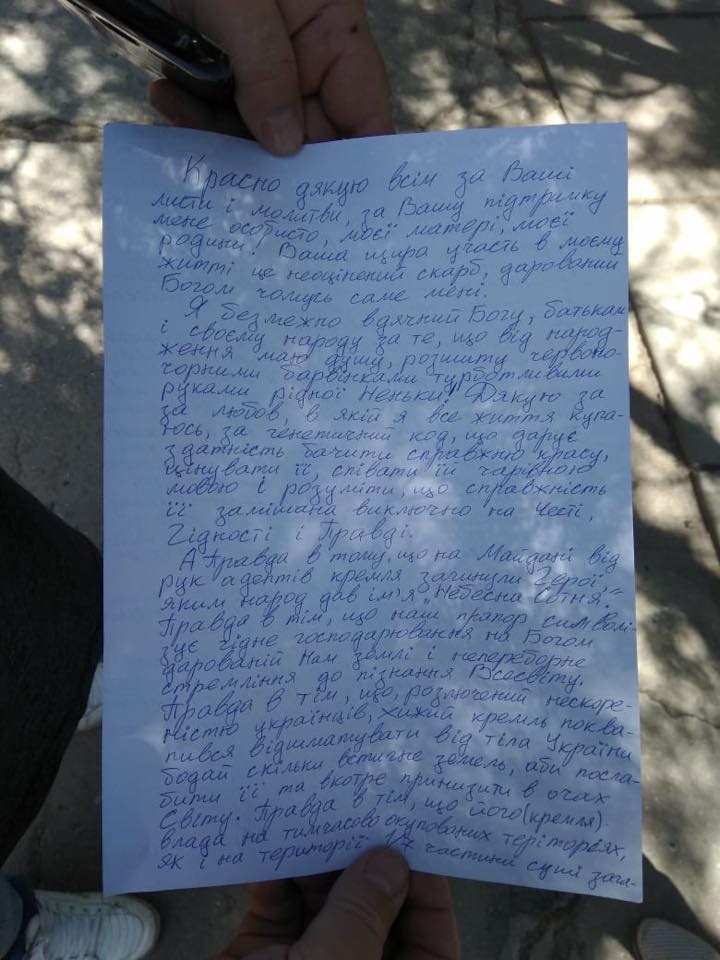 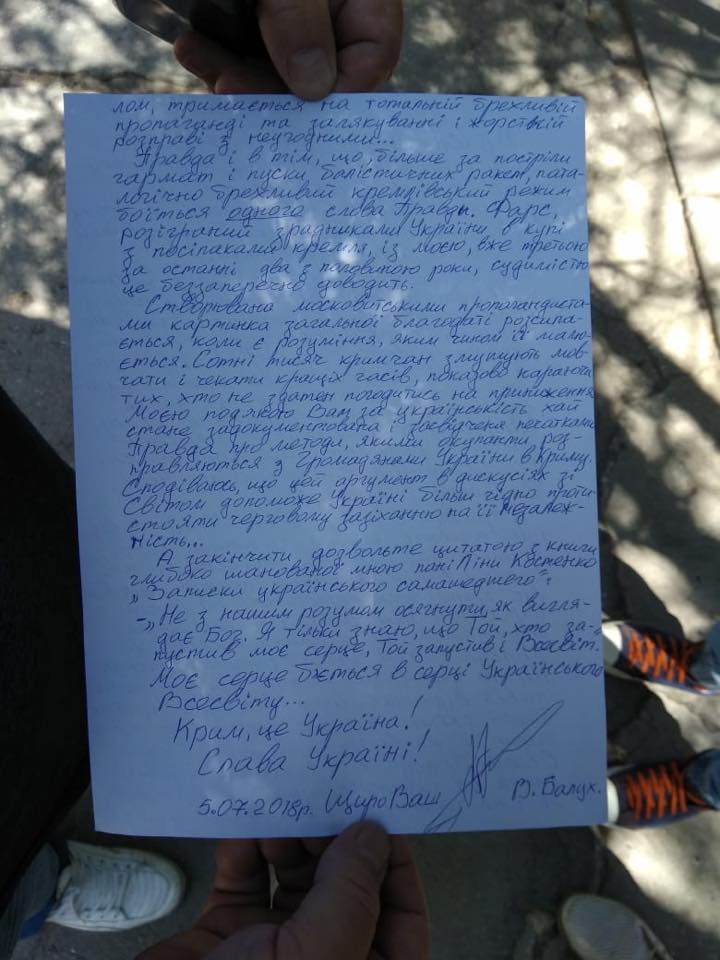