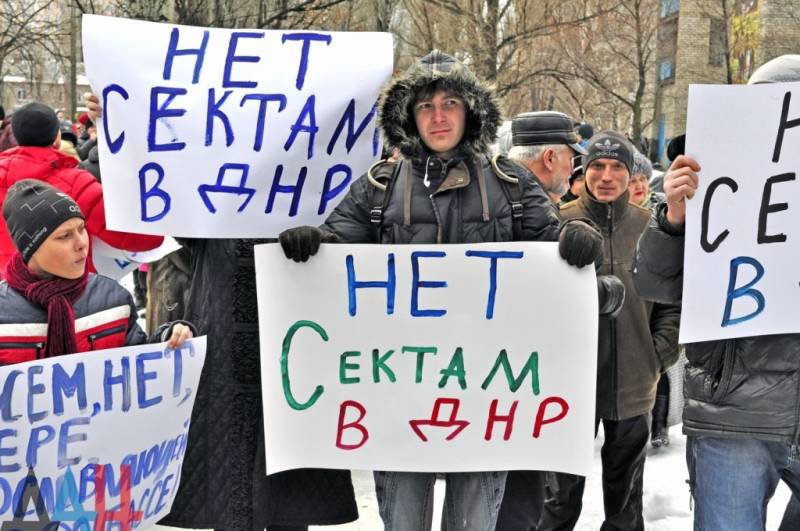 At least two churches in the self-proclaimed ‘Donetsk people’s republic’ [DPR] have been forcibly closed, and the premises themselves seized by the Kremlin-backed militants.  Judging by new rules on ‘re-registration’, many other religious communities are likely to find themselves outlawed in the near future.

Alexander Moseychuk, Pastor of the New Life Church in Makiyivka reports that on 6 July,  seven ‘DPR’ representatives, some of them armed, burst into the church and announced that it no longer belongs to them. Father Alexander notes that their Church has helped over 700 people during the four years since the beginning of the war.  Around 120 believers can be expected to arrive at the gates of the Church on Sunday and will find it sealed.  He asks if this augurs the beginning of persecution.

The Institute for Religious Freedom [IRF] earlier reported that the Church of the Holy Spirit in Donetsk, which is under the Ukrainian Orthodox Church of the Kyiv Patriarchate, was forcibly closed on 10 June by representatives of the so-called ‘DPR state property fund’.  No explanation was provided.

These may not be the only churches which have already been closed and, effectively, plundered by representatives of the Kremlin-backed ‘republic’.  Nor are only Christian believers targeted.  As reported, the only mosque remaining in occupied Donetsk was closed in late June, after an armed search and interrogation of the Imam and worshippers.  The measures taken were ominously reminiscent of those used since 2014 by the Russian occupation regime in Crimea.  In Donetsk, the so-called ‘DPR law’ on countering extremist activities was cited as the grounds. IRF notes that this document, like in Russia, is often used against ‘dissident’ believers or religious organizations.

The present situation can only get much worse, given a new DPR rule prohibiting the activities of any religious organization which has not undergone ‘re-registration’ by 1 March 2019.  This, IRF explains, is in accordance with the so-called ‘DPR law’ on freedom of faith and religious organizations, passed back in April and in force from May 2018.

Local believers report that churches and religious organization have been told that if they don’t ‘re-register’, they face a ban on their religious activities and ‘confiscation’ of all church property.

This is not just some bureaucratic requirement.  In order to obtain re-registration, each religious organization will have to undergo an ‘expert assessment’.  The latter will likely be used to provide ‘DPR’ with a pretext for refusing to re-register, and therefore banning, various churches and other religious groups.

Typically, one religious denomination is not required to undergo the above-mentioned procedure, namely the Ukrainian Orthodox Church of the Moscow Patriarchate, which will have a simplified ‘legalization’ process.

The clause was later removed from the ‘constitution’, but the favouritism has remained.  So too has the conviction of many militants from Russia that they are fighting a ‘crusade’ in Ukraine, in defence of a supposed ‘Russian World’ which has been endorsed by the head of the Russian Orthodox Church Patriarch Kirill (more details here).

The situation in ‘LPR’ appears to be even worse, with IRF reporting that religious organizations are being forced to ‘re-register’ by the beginning of August 2018.

As reported in February 2018, several ‘laws’ were adopted, including one aimed at hunting down and prohibiting so-called extremism in religious or political organizations, as well as in the media.  The so-called ‘LPR law’ on freedom of faith and religious organizations banned all religious groups of five or more people which are not directly linked with one of the ‘traditional faiths’.  Although it was not specified which faiths could be considered ‘traditional’, it was clear that ‘LPR’ was thus following Russia in banning the Jehovah’s Witnesses (more details here)

There have also been attacks on Evangelical Churches.  On 27 March 2018, men in military gear turned up at a Baptist place of worship in Stakhanov [within occupied ‘LPR’], forced their way into the premises and took out everything, including furniture and items used during services.

IRF points out that in the latest report from the U.S. Commission on International Religious Freedom (USCIRF), responsibility for religious persecution in both occupied Donbas and Crimea is placed firmly on the Russian Federation.