Crimean Tatar, jailed on fake extremism charges, refuses to be cowered into silence 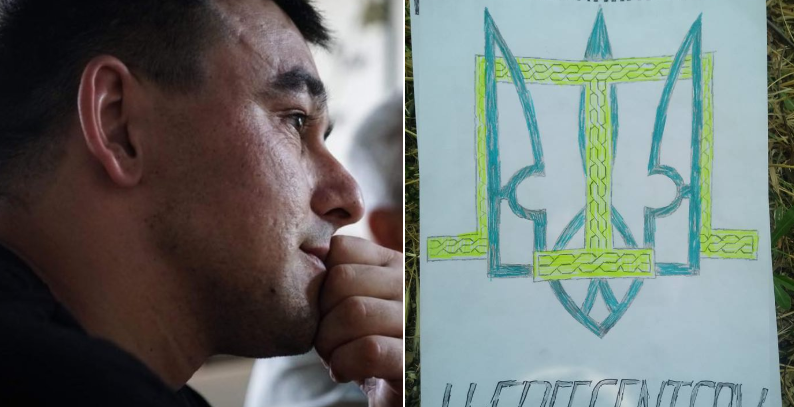 Ismail Ramazanov has lodged a formal complaint accusing an investigator from the Russian Investigative Committee of falsifying the evidence in his case.  He has ample grounds, however it takes courage in occupied Crimea, especially when you have just spent six months held prisoner after being savagely beaten to try to extract a ’confession’ to fictitious ’propaganda of extremism’ charges.  Ramazanov spent much of his time in detention thinking about other political prisoners, like Oleg Sentsov, and passing on pictures and messages of support.

The 31-year-old from the village Novy Mir was released from custody on 14 July only because even Russian procedural legislation does not allow for more than six months detention on the ‘propaganda of extremism’ charge which Ramazaonv is facing.

On 17 July, he lodged a formal complaint to the Head of the Russian Investigative Committee in Crimea accusing Dmitry Kosyakin of falsification.  This pertains to a court hearing where a protocol was presented which claimed that Ramazanov had been read all the file material aloud with this supposedly taking three hours.  Kosyakin claimed that Ramazanov had refused to sign the protocol. As Ramazanov, helped by his lawyer Alexei Ladin, points out, any such refusal needed to have been certified by the signatures of two independent witnesses.  In fact, Ramazanov was held in his cell on the day in question (26 June), was not presented with anything and therefore had nothing to refuse to sign.

They ask for an inquiry and for criminal proceedings to initiated over falsification of evidence (Article 303 § 2 of the Russian criminal code).  They have filed another complaint over infringement of the time set for a person to be able to read the file material in their case.

Ladin has long pointed to gross irregularities in this case. He complains that the de facto court  has resisted legitimate attempts to prove that the 24 bullets allegedly found during the search of Ramazanov’s home were in fact planted.  Even the most obvious application – for a fingerprint assessment – was turned down.  There can be no good reason for blocking such an assessment, unless there is something to hide, such as the complete lack of any evidence that Ramazanov had ever set eyes on the bullets.

Krym.Realii reports that according to their sources, a commission is currently in Crimea checking the work of the Investigative Committee.  They have already initiated 12 criminal investigations, with three more days of work to go.

Armed men in balaclavas turned up at the Ramazanov home on 23 January this year.  They claimed to have found a Makarov pistol and bullets, although all those who know Ramazanov say he is a devout Muslim who could not possibly have been in possession of firearms.

He was taken away and not seen again until the court detention hearing the following day.  The state he was in during the detention hearing provided graphic confirmation of his allegations that the time in between was spent trying to beat a ‘confession’ out of him.

Ramazanov held firm, refusing to confess to crimes he had not committed. He was in very obvious pain during the hearing and stated clearly that he had been beaten by the FSB officers both during the search, and later in their vehicle.  He complained of pain in the side, the shoulder, the back of his head and said that his finger had been twisted.  He asserted also that one of the four masked men who brought him into the court had been among those beating him.

Ladin asked the court to call an ambulance and also to organize a medical examination.  The ‘prosecutor’ objected and produced a document claiming that Ramazanov’s health was satisfactory.  Ramazanov’s condition contradicted this document, yet Simferopol District Court ‘judge’  Iryna Kirillova complied with the ‘prosecutor’s’ request for him to be remanded in custody for a month, until 23 February.  Other ‘judges’ proved to be just as obliging in extending the detention.

This was by no means because he was accused of something serious.  Ramazanov is charged with having made ‘extremist’ comments on the Zello Internet radio which is banned in Russia. The charges are under Article 282 § 1 of Russia’s criminal code, on inciting enmity or denigrating a group on ethnic grounds or their belonging to a social group.  In this case, the occupation regime is calling ‘Russians’ a social group.

At an earlier detention hearing, Ramazanov called the charges against him “provocation against him and the entire Crimean Tatar people”.