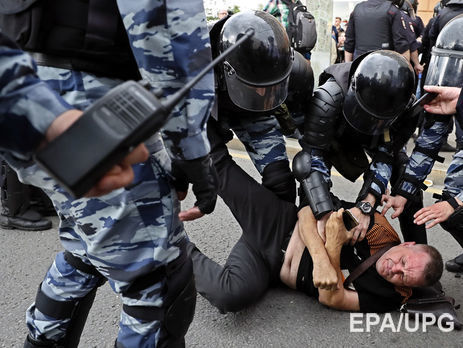 Bases are to be set up for Russian President Vladimir Putin’s National Guard [Rosgvardia] in three cities in occupied Crimea. The official line is that the National Guard bases, together with one for OMON riot police, are needed to protect Russia’s illegal Crimea Bridge from ‘Ukrainian saboteurs’.  Many suspect, however, that the real aim is to have this army of specially trained fighters on hand to crush any protests, amid mounting disgruntlement with socio-economic problems and other issues.

It was reported on 15 July that the relevant state property committee is to assist Rosgvardia in registering (appropriated Ukrainian) property in Simferopol, Alushta and Kerch.  Among Rosgvardia’s main aims, it is claimed, will be “to ensure safety of important sites on the peninsula, for example, the bridge over the Kerch Strait.  In one of the cities land, etc. will also be made available for a base of OMON [riot police].

Krym.Realii spoke with Sergei Akimov, Ataman of the Cossack organization ‘Krymskoye kazachestvo’ who appears to have been in conflict with the occupation regime since at least 2016, and has been detained at least once for a single-person picket.

Akimov is clear that there is no objective need for an increase in law enforcement officials in Crimea, and says that there is already one police officer or military serviceman for each single Crimean.  Every time you turn on the television, he says, you hear predictions of terrorist acts, etc. in Crimea, yet he believes that it’s protest rallies that they’re worried about, not saboteurs.  Over the last year and a half, he asserts, the mood has become more explosive, with tensions running high in society.

Russia is not just spending vast amounts on building homes, etc. for enforcement officers.  According to Akimov, whole micro-districts are being built for tens of thousands of Russian soldiers.

“You can already feel that we’re living in a colony – not just as regards the military. Various civilians turn up from Russia and begin imposing their rules.  They say that Crimea was backward under Ukraine.  In general, this is a military base.”

Mykola Palamarchuk, former Deputy Head of the Crimean Police, agrees that the deployment of so many Rosgvardia and OMON fighters is aimed at intimidating the population, rather than based on any real need.  Before annexation, he notes, there were 10 thousand police officers, two thousand Interior Force conscripts and two thousand Security Service [SBU] officers, and that was quite sufficient.

“Russia needs forces to disperse protests, to hold to account those who are disgruntled, those who, according to the Russian authorities, disturb public order. That’s why they increase the number of enforcement officers, so that their presence frightens those who might want to hold a rally or something”.

Krym.Realii also spoke with Dmitry Solonnikov from the Russian Institute for Contemporary State Development, who asserted that the deployment of so many Rosgvardia fighters was justified.

According to him “The Ukrainian leadership and political figures constantly talk about this, about organizing sabotage around Crimea. <>  Rosgvardia fighters will be responsible for the security of people on holiday in Crimea, including Ukrainians, protecting them from attacks on their holidays and unlawful actions of the Ukrainian state”.

Solonnikov was, unfortunately, not challenged to provide examples.  The main claims of such ‘terrorism’ or ‘sabotage’ have been linked with much-publicized FSB arrests – of Ukrainian filmmaker Oleg Sentsov, civic activist Oleksandr Kolchenko and two other opponents of annexation in 2014.  No evidence of ‘terrorism’ was ever found, and the horrifically long sentences have been condemned by the international community.  There was a similar lack of any factual evidence to back the claims made that the Ukrainian military was planning widespread sabotage in August 2016 and then in November that year.  The claims were based solely on the televised ‘confessions’ of Ukrainians seized by the FSB.  Those who were later not held incommunicado retracted these confessions, saying they had been obtained through torture.  It is significant that four out of the seven men already put ‘on trial’ were convicted of charges that had nothing to do with their ‘confessions’ and, accordingly, nothing to do with Ukraine’s military intelligence or SBU.

Russia’s National Guard, or Rosgvardia, was created by Putin’s presidential decree in April 2016, from the old Interior Forces, together with OMON, purportedly to protect public order, fight terrorism and extremism and guard state buildings.  It later transpired that it would also be involved in taking fingerprints and something referred to as “information counter-resistance”.

It was from the outset viewed by many commentators as President Putin’s own “personal army” aimed at quelling unrest,, and reporting directly to him.  Russian security specialist Mark Galleotti, for example, asked what it says when  Putin needs his own personal army.  You don’t need to create a National Guard out of the Interior Troops, he added, unless you have serious concern about public unrest.  Galleotti also saw it as significant that the new formation was to be headed by Viktor Zolotov, who was in charge of Putin’s own security guard [FSO] from 2000 to 2013.  This made Rosgvardia “even more clearly a personal, presidential Praetorian force, under a maximalist loyalist. This may not only be a force to keep the masses in check, but also the elite,”  he suggested.

In December 2016, Sergei Melikov, the First Deputy Commander of Rosgvardiya announced that the army’s ‘intelligence unit’ would be deployed “in uncovering threats to the state system in Russia”.  “Sources of extremism may be not only behaviour linked with intolerance of this or that action by the state, but also inter-faith or inter-ethnic enmity, etc.”  Melikov asserted that these “can be used to create the conditions which would result in an undermining of the state system”.  He promised that the service will “prevent any actions which can lead to mass disturbances”.

Putin’s Press Secretary Dmitry Peskov made it clear back in April 2016 that these fighters could be deployed against “unauthorized mass protests”.  In breach of Russia’s Constitution, the authorities regularly refuse to ‘authorize’ planned peaceful demonstrations and the Rosgvardiya has repeatedly been used against anti-Putin and anti-corruption protesters.

In May 2017, Zolotov reported  that Rosgvardia was now made up of nearly 400,000 troops – more than the number of regular Russian ground forces.

Despite this, on May 24, Putin signed another decree which stated that the President could subordinate all units of the Armed Forces and other military formations to Rosgvardia.  Well-known Russian commentator Aleksandr Golts commented that “such subordination implies that the Kremlin must believe the internal threat to the state is far more dangerous than external threats”, and that the decree indicates that “the government fears that large-scale public unrest could cover the entire territory of the country”.

Those concerns would seem to now extend to occupied Crimea.