Plundering & Persecution of Jehovah’s Witnesses in Russia & occupied CrimeaDennis Christensen gets 6 years in first Russian sentence of a Jehovah’s Witness since Soviet timesRussia uses same methods of persecution against Crimean Muslims and Jehovah’s WitnessesCrimean Tatar political prisoner ‘retried’ until Russia’s FSB got the sentence they wantedApplication practice of Article 110 of the Criminal Code of UkraineCrucial victory for Ukraine in ECHR case against Russia over Crimea Crimean Tatars sentenced to 18, 17 and 13 years for discussing their faith and Russian persecution Mass detention of Crimean Tatars travelling to political trial in Russia Next, Russia will come for the children The childhood Russia ended in 2020 with machine guns and arrests Moscow’s proxy ‘republics’ announce that Donbas is and always was ‘Russian’Russia begins its most repressive trial of Crimean Tatar journalists and activistsRussia launches attack on Crimean Solidarity journalist covering trials of Crimean Tatar political prisoners Russia seeks to imprison three Crimean Tatars for 50 years on thought crime chargesUkraine’s religious freedom crushed in Russian proxy Donbas ‘republics’Wave of police raids in Russian-occupied Crimea as warning to Crimean Tatar activistsMPs challenged to fight Russian repression by adopting a Ukrainian political prisonerCriminal proceedings under Article 111 of CC of Ukraine against the journalistsRussia prevents jailed Crimean Tatar activists facing 20-year sentences from learning what they’re charged withNew offensive against wife of Crimean prisoner of conscience sentenced to 12 years for converting to Islam
• Topics / Freedom of conscience and religion
• Topics / News from the CIS countries 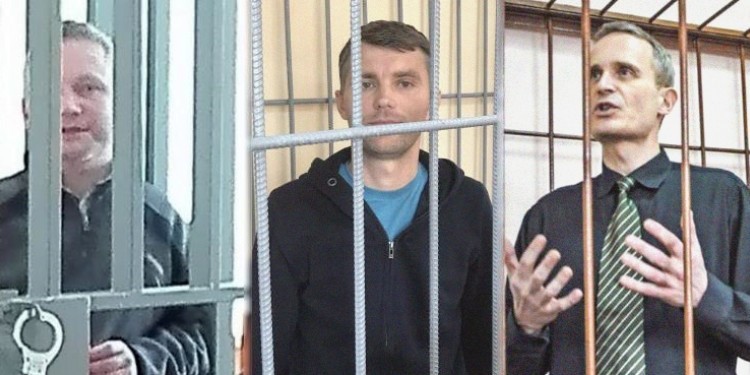 Russia’s authoritative Memorial Human Rights Centre has recognized as political prisoners 29 Jehovah’s Witnesses, imprisoned for their faith.  It warns that the number of people already facing persecution is higher and rising rapidly.  Armed searches and arrests have so far been in parts of the Russian Federation, but it is only a question of time before they begin in Russian-occupied Crimea.

On 27 July this year, there were armed searches of at least three homes in the Kemerov oblast, with two believers  - Sergei Brytvin and Vadim Levchuk - arrested and remanded in custody.  In one of the flats, the FSB began storming the premises from the balcony, even though the woman in the flat had already opened the door to another group of FSB officers.  She was then injured by the glass they broke to burst in a second time.

On July 6, a couple from Omsk - Sergei Polyakov and his wife, Anastasia – were arrested and remanded in custody.  For the moment,  Anastasia Polyakova appears to be the only woman in custody for being a Jehovah’s Witness, but given the wave of repression unleashed since April 2018, there will certainly soon be others.

Russia’s Constitution guarantees freedom of religion, but it  espouses many other rights and freedoms which effectively exist only on paper.  The constitutional norm was certainly ignored by the Russian Supreme Court which, on 20 April 2017. Banned the Jehovah’s Witnesses.  The ruling declared this faith and its adherents to be ‘extremist’, though Memorial HRC stresses that the Court did not provide even one example where believers had breach public order, shown aggression or violence, or in any way indicated that their activities were a threat to the security of the Russian Federation.

As of 3 August 2018, at least 23 Witnesses are in custody, with no less than six others under house arrest.  Memorial HRC is aware of ten others who are facing prosecution, but not as yet deprived of their liberty, however warns that the list may not be comprehensive, and certainly likely to increase.

Virtually all of them are charged under Article 282.2 § 1 of Russia’s criminal code (with organizing activities of a religious organization which has been banned as ‘extremist’).  This absurd charge can carry a sentence of up to 10 years’ imprisonment.  10 believers are facing the slightly less serious charge of ‘taking part’ in such activities, with this potentially resulting in a sentence of up to six years’.

Two people have also been charged under Article 282 § 1 (inciting enmity, and denigrating a group of people’s dignity on religious grounds, with this carrying a sentence of up to 5 years’ imprisonment.

Memorial had earlier declared Dennis Christensen, a 46-year old Danish citizen and a Jehovah’s Witness Elder, to be a political prisoner, He was arrested on May 25, 2017 and has been in custody ever since, with his ‘trial’ continuing since April this year.  He faces a sentence of up to 10 years’ under Article 282.2 § 1.  Memorial called the charges discriminatory, and in violation both of Russia’s Constitution and of international legal documents, particularly those enshrining the right to freedom of conscience and religion.

In occupied Crimea, there have been a large number of administrative prosecutions against Jehovah’s Witnesses, but this could change any day.

In June 2017 it was also learned that a young Crimean Witness had been ordered to provide ‘proof of change of faith’ in order to be eligible for alternative civilian service.  This is in addition to Russia’s grave violation of international humanitarian law by conscripting young men on illegally occupied Ukrainian territory.

Jehovah’s Witnesses were executed by the Nazi regime for refusing to serve in the Wehrmacht, and imprisoned on similar and other grounds in the Soviet Union.  It is a very dark legacy that Russia is now embracing with mounting repressive force.