Belarus KGB arrest journalist who identified the Ukrainian Berkut helping Lukashenka regime Belarusian Journalists Handed "Absurd" Prison Sentences For Live Coverage Of Anti-Government RallyMore Than 1,000 Detained In Belarus As Protesters Face Tear Gas, Stun Grenades, BeatingsBelarus: Savage attack and possible 3-year sentences against journalists reporting March against TerrorBelarusian Police Detain More Than 90 As Protests Enter 11th WeekBelarus threatens to use lethal force against protesters as pensioners march for freedomHow post-election protests are creating a new Belarus’We’re Belarusians, Not A Russian Region’: Protests Take Aim At KremlinLukashenka returns Donbas mercenaries to Russia, others, reportedly, on their way to BelarusBelarusian museum director who refused to sign false election protocol found deadLukashenko regime’s savagery may be backfiring in BelarusBelarus initiates ‘mass riot’ criminal charges against detained Ukrainian rights activistsBelarusian Opposition Presents Broadest Challenge Yet To Strongman Lukashenka After Disputed ElectionBelarus: ‘I appeal to all Europe: Please help us, because they’re killing my family’Belarus: Peaceful protester killed in violent crackdown after claimed Lukashenko victoryWhy were Wagner fighters from Russia seized in Belarus and can Ukraine get them extradited?State Media Vs. The Streets: How Lukashenka Lost The Media War In BelarusTop Lukashenka Challenger Babaryka Barred From Belarus’s Presidential ElectionBelarusian Vlogger Gets Another 15 Days In Jail As He Awaits Criminal ChargesAI condemns purge on bloggers & activists ahead of presidential elections in Belarus
• Topics / News from the CIS countries 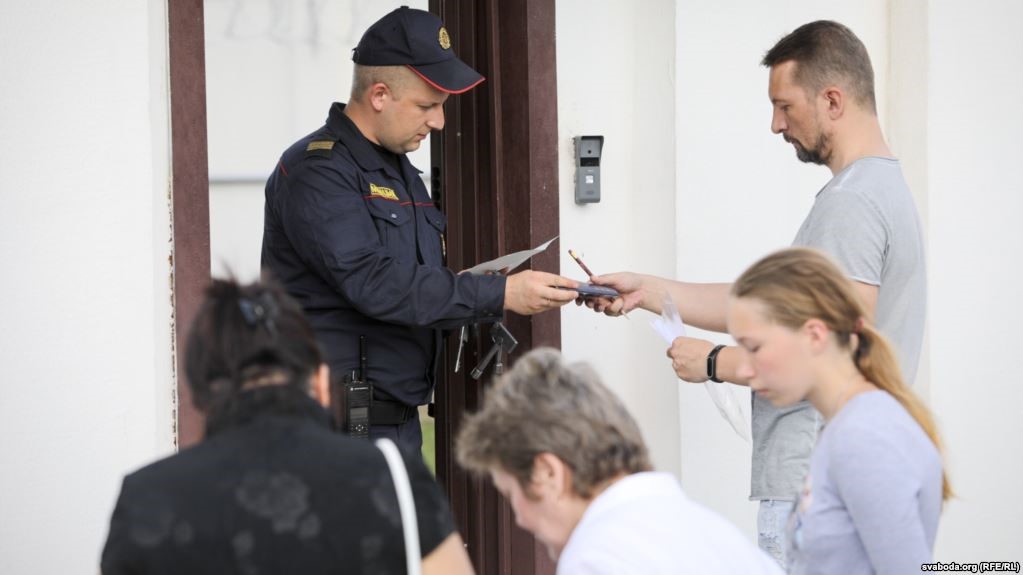 Colleagues of the arrested Tut.by and BelaPAN journalists bring them food from outside to the prison in Minsk on August 8

Valentina Karavyankova and her daughter were at their weekend cottage outside the Belarus capital of Minsk on August 7 when a loud commotion shattered the countryside calm.

A car from the Investigative Committee stood outside the house in Zhodishki and agents were approaching the gate, which was locked. But that didn’t deter them.

"At seven in the morning we heard a loud rumble on the street. It turned out the [Investigative Committee] officers had broken down the locked gate. They had only knocked once," Karavyankova told RFE/RL.

Her daughter, Tatsyana, a journalist at the BelaPAN news agency, then let them in the house.

"Tanya opened the door and they showed us a search warrant. They took telephones -- mine and Tanya’s -- a notebook, flash drives, a dictaphone. They also searched the car," Valentina recounted.

Her daughter was then taken into custody by the officers.

Tatsyana Karavyankova was one of five female reporters rounded up by security forces in Belarus that day. All were charged with illegally accessing dispatches of the government news agency BelTA and held in detention.

Since then, more journalists and even a chief editor have been detained in Belarus amid growing international concern.

Analysts say the detentions show Belarusian President Alyaksandr Lukashenka has perhaps launched his boldest effort yet to silence the few independent voices that remain in the tightly controlled Eastern European state of some 9.5 million.

It comes after the country’s parliament -- which regularly approves the legislation the government proposes -- adopted a more draconian media law in April.

Most of the journalists detained by the Investigative Committee work for either Tut.by, which is the most-popular Internet news portal in Belarus, or BelaPAN, the country’s only privately run news agency.

The media outlets’ Minsk offices were also searched by Investigative Committee officers on August 7 in connection with what has been dubbed the "BelTA case."

"This is something new...and very dangerous. I see everything that has recently happened in Belarus as signs of the ’Azerbaijanization’ of Belarus. They are trying to gradually limit the space for freedom," said Andrey Dynko, editor in chief of the Belarusian news outlet Nasha Niva, referring to energy-rich Azerbaijan, the Caspian Sea state ruled autocratically by Ilham Aliyev.

"We see that the government is extending its control over the media space in Belarus and the Internet," Dynko said. "And of course, when control is extended over the Internet, how can Tut.by and BelaPAN avoid that?"

In a dramatic turn of events, BelaPAN editor in chief Iryna Lewshyna was taken into custody in Minsk on August 9 in connection with the BelTA case, according to an Investigative Committee statement.

And, in a sign the Belarusian authorities may be casting their nets even further, local journalist Paulyuk Bykouski, who worked for the German broadcaster Deutsche Welle, was detained on August 8.

Bykouski’s wife, Volha Bykouskaya, told RFE/RL her husband was detained by Investigative Committee officers after they confiscated his computers and credit cards.

Later on the same day as the official raid on their cottage, Valentina and Tatsyana Karavyankova were driven back to Minsk. "Tanya was taken to the Investigative Committee and I was taken to our apartment, which was to be searched," Valentina said. "But as we approached the entrance [to our apartment] there were journalists."

Apparently caught off-guard by the gaggle of reporters waiting outside the apartment, the officers instead drove Valentina to the Investigative Committee headquarters where her daughter was.

She sat there for the next seven hours, until 9 p.m., without anything to eat or drink. Finally, two officers appeared.

"Maybe they were lazy, maybe because it was too late, but they talked for a long time and then called a taxi, saying they would come back tomorrow for the hard-drive disk from the computer," Valentina said. "And Tanya would be brought back for questioning since she had refused to talk without a lawyer."

What Are The Charges?

According to the Investigative Committee, those either charged or suspected in the BelTA case are accused of illegally accessing news reports by BelTA by using a subscriber’s account and password. Access to BelTA’s dispatches are reserved for subscribers for the first 15 minutes after being posted online.

The Investigative Committee said in a statement on its website that computers from within the Tut.by and BelaPan offices, as well as those from a third outlet, Belarusskaya Nauka, used an account and password other than their own to access the paid-subscriber section of BelTA.

"The ’crime’ based on which the Investigative Committee has launched a probe is really nothing more than a business dispute," said Andrei Bastunets, head of the Belarusian Association of Journalists.

Yelena Tonkacheva, a leading Belarusian human rights lawyer, noted other flaws in the charges. "If BelTA was so worried about protecting its information, why didn’t they change passwords, for example every other month? Why in the terms of use weren’t there restrictions and guarantees that these passwords can be transferred?" she asked.

Tonkacheva, like other analysts, believe the charges are merely a smokescreen for the crackdown on the diminishing number of independent voices in Belarus. "These charges really don’t matter. I think what has taken place was a planned, targeted action against these two news sources," she explained.

Independent journalism has long carried its risks in Belarus, but passage of a draconian media law earlier this year has made it harder, Bastunets explained. "Tut.by may have earlier felt sort of free," he said. "I know that it was under great pressure, but these actions which were undertaken [on August 7] show that the government or a definite part of the government has shifted from threats to action."

A month after parliament passed the new media law, Belarusian journalist Dzmitry Halko was sentenced to four years of forced labor after being convicted of assaulting two police officers, charges he said stemmed from his critical coverage of Lukashenka and his government.

Also in July, Natallya Radzina, the Poland-based chief editor of Charter97, another independent news site that is critical of Lukashenka, reported receiving death threats, which she believes is related to her work.

Other journalists and bloggers have been harassed and detained in recent months, according to the Committee to Project Journalists.

Even more have been fined -- nearly 50 -- according to the Paris-based media watchdog Reporters Without Borders (RSF). RSF ranked Belarus 155th in its 2017 World Press Freedom Index, which evaluates the level of press freedom in 180 countries each year.

In the current instance, 16 journalists have been detained for questioning in the BelTA case with eight being released.

"I knew what a shock it must have been for them," Radzina said in comments to RFE/RL. "But when you’re a journalist and you don’t work for government media you should still always be ready, even though it’s hard to comprehend that you can be arrested for just being a journalist simply reporting what is going on, reporting reality."