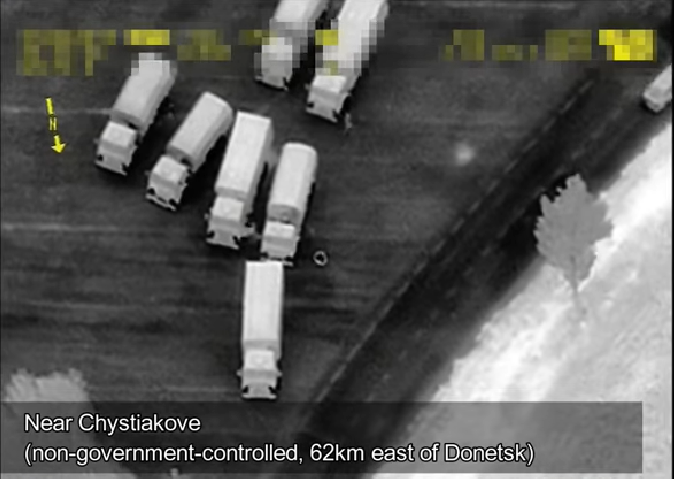 There can be no good reason for Russian military trucks to be travelling to and from militant-controlled Donbas by dirt roads at night, avoiding official border crossings, unless they have something to hide.  It was precisely such behaviour that an OSCE drone recorded late in the evening on 7 August, with the considerable footage showing that the trucks were travelling in both directions.  While there is no proof as to what the trucks contained, the secrecy of this operation should make it of interest to both the International Criminal Court and the UN’s International Court of Justice at the Hague.  The latter is currently considering whether Russia is violating the UN’s International Convention for the Suppression of the Financing of Terrorism by actively arming, manning and controlling the armed conflict in Donbas.  Russia denies the charges, and claimed during the preliminary hearings into the charges that the main source for the vast amounts of weapons and ammunition used by fighters of the self-proclaimed ‘Donetsk and Luhansk people’s republics’ [DPR, LPR] “are stockpiles inherited by Ukraine in 1991 from the Soviet Army”, as well as “the retreating Ukrainian army”.

The military trucks carrying supplies by night would seem a much more likely source.  This is not the first piece of highly incriminating evidence, but the fact that it comes from an OSCE drone makes it especially difficult for Russia to explain away.

The OSCE’s Special Monitoring Mission to Ukraine [SMM] issues reports almost daily on its findings, with the information about the drone’s findings posted on 9 August.

These reports are normally so dry and matter of fact that it is often difficult to notice incriminating details.  Not so this time, however, with the first line leaving no scope for doubt.

“An SMM long-range UAV spotted convoys of trucks entering and exiting Ukraine via a dirt track where there are no border crossing facilities in the middle of the night.”  At 22.15 on 7 August, the drone recorded a convoy of eight cargo trucks (five KamAZ-4310, the others undetermined) near Chystiakove (non-government-controlled) and travelled around 3.5 kilometres before reaching the Russian-Ukrainian border and turning onto a dirt road.  The two convoys passed each other for around five minutes.

“Each of the convoys separately stopped for about three minutes next to an off-road vehicle that was parked in a field along the above-mentioned dirt track, 1.7km from the border, and again next to two trucks parked at the intersection of the dirt track and the paved road (3.5km from where the convoys crossed the border)”. At both spots, the occupants of the parked vehicles interacted with the drivers of each convoy’s lead vehicle.

The convoy coming into Ukraine was later observed in territory within the so-called ‘Luhansk people’s republic’.

“On 7 August, the SMM for the first time observed what it assessed to be an improvised camp consisting of six armoured reconnaissance vehicles (BRDM variants) and 15 military-type trucks (two KamAZ variants, four Ural variants, two KrAZ variants, six ZIL variants and one of undetermined manufacture, all painted in shades of green), one bearing white-on-black licence plates with the prefix “DK” in Cyrillic letters, 2km east of Cheremshyne (non-government-controlled, 59km south-east of Luhansk). The vehicles were parked close to one another and camouflage netting was strung from one of them. About 1.6km east of the camp, there is an unguarded road crossing into the Russian Federation which is barricaded with a metal bar.”

Such nocturnal movements by dirt road across an unguarded border make it abundantly clear why Russia was so careful in restricting the mandate of the sole OSCE Observer Mission which monitors movement at the border.  The title in full specifies its restricted nature, it being only the OSCE Observer Mission at Russian Checkpoints Gukovo and [Russian] Donetsk.  This mission has 20 civilian monitors, including the Chief Observer, who boast on their website of operating on a shift basis to ensure 24-hour cover.  This is all very well, and they doubtless monitor the area within their scope very well – all 40 metres of the Ukrainian-Russian border.

Ukraine lost control of a vast expanse of the border between Russia and Ukraine during the summer of 2014. It was this uncontrolled border that made it possible to bring the BUK missile launcher that downed Malaysian airliner MH17 into militant-controlled territory in July 2014, as well as tanks, military personnel, mercenaries and arms. It is all of this border that needs to be monitored, but it is that that Russia and the militants are opposing.  The mission began in July 2014 with a mandate to observe checkpoints crossing into Ukrainian-controlled territory where Russia was least likely to send soldiers, tanks and other heavy artillery across the border.

It was also mandated to watch only that specific area, and pay no attention to anything outside it (more details here: Russian tanks entering Ukraine that the OSCE is mandated to miss ). The necessarily limited viewings from this monitoring mission are often cited on propaganda channels as ‘proof’ that Russia is not bringing in weapons, etc.  One assumes that the drone’s findings will not get a mention.

On 31 May Charge d’Affaires Harry Kamian from the US Mission to OSCE pointed out that they “have no idea what is actually inside these supposed humanitarian aid convoys, because the Russian Federation will not let the Observer Mission or the SMM inspect them or watch them unload. We do know, however, that these so-called aid trucks did not unload at any hospital, school, NGO, or UN warehouse. Rather, they were unloaded at a compound the SMM reported as used by Russia-led forces. Armed men in military uniforms guarded its perimeter and prevented the SMM monitors from seeing the cargo or speaking with anyone on site”.

It is frustrating that only the first of these convoys ever attracted international attention.  The 280 trucks in August 2014 were supposed to be checked near Kharkiv and reloaded onto International Red Cross trucks.  Instead the trucks suddenly changed direction entering the Luhansk oblast through the militant-controlled border.

It should therefore not be of any surprise that foreign journalists discovered that many of the trucks they were shown appeared either half or almost totally empty.  Some of their contents may have been quietly removed en route, or the entire exercise was aimed at exhausting international interest so that the subsequent convoys could pass virtually unnoticed.

The ‘convoy’ may possibly have always had near empty loads and been intended as a decoy.  Around this time, a Polish TV correspondent was filming a seemingly endless succession of Russian military trucks with men, armed personnel carriers, artillery and anti-aircraft weapons moving towards a part of the Russian-Ukrainian border not under Ukrainian government control.

The footage from 18 August 2014, and the days around this, is still available and well-worth close scrutiny, especially given the sudden unexpected turn in the fighting near Ilovaisk towards the end of August.  Although the International Criminal Court’s Office of the Prosecutor is still considering whether there is enough evidence of Russia’s involvement in the conflict in Donbas to call the war an international armed conflict, it did report that “during the course of the conflict, periods of particularly intense battles were reported in Ilovaisk (Donetsk oblast) in August 2014 and in Debaltseve (Donetsk) from January to February 2015. The increased intensity of fighting during these periods has been attributed to alleged corresponding influxes of troops, vehicles and weaponry from the Russian Federation to reinforce the positions of the armed groups.” (para 92).

In May 2018, the Joint Investigation Team concluded in May 2018 that “the Buk missile which downed Malaysian airliner MH17 on 17 July 2014 came from the 53rd Anti-Aircraft Missile brigade which is a unit of the Russian army from Kursk in the Russian Federation”.

After this, you would assume that any further denial of Russia’s direct military engagement in Donbas was senseless.  The same was true, however, when Polish television showed military technology and soldiers being taken in the direction of the Ukrainian border in August 2014, and not returning, and multiple other pieces of evidence, which Russia is continuing to reject.  The drone footage is therefore very important evidence, which Moscow should be challenged to explain