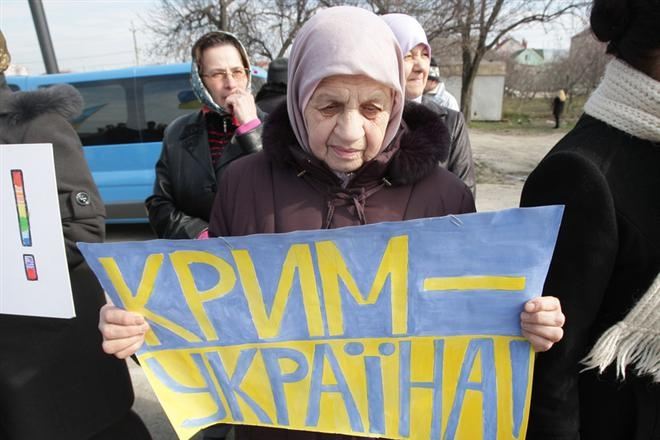 Russia is treating Ukrainians in Ukrainian Crimea as ‘foreign migrants’.  Those who refused or were unable to take on Russian citizenship after Russia’s annexation of Crimea are systematically penalized by the occupation regime, with an ever-increasing number even deported.   This is in flagrant breach of international law, as are the measures being taken to block Crimeans’ access to Ukrainian websites and to persecute people who report on the armed searches, arrests and politically-motivated prosecutions under occupation.  Back in 2015, Freedom House noted that infringements of freedom of speech were even greater in occupied Crimea than in Russia, and this trend has continued.

The Crimean Human Rights Group has published details of the extensive monitoring reported earlier, showing how Russia has systematically fined and / or deported Crimeans without Russian citizenship.

Information posted on the Russian Federation ‘Justice System’ website shows that since Russia’s invasion and occupation of Crimea, up till the end of June this year, at very least 8,479 cases have been initiated under Article 18.8 of Russia’s code of administrative offences (infringement by foreign nationals or stateless persons of the rules of entry or for being (residing) in the Russian Federation.  Punishments were meted out in almost seven thousand cases.

The monitors analysed one thousand rulings between April 2016 and November 2017, and found that in 95.9% of the cases, people were fined, with the overall amount in fines reaching over two million roubles.  At least 370 people penalized had been living in Crimea at the time of Russia’s invasion and occupation.

In 36.9% of the cases, deportation was also imposed, as well as a fine, with this including at least 79 Ukrainians who had been living in Crimea in February 2014.

Of those Ukrainians deported, at least 40 have families or close relatives in Crimea.

If one assumes that 95.9% for all 6,972 rulings under Article 18.8, then it is likely that by the end of June 2018, around 6,650 people had been penalized under Russian occupation for not having Russian Federation documents.  Assuming 36.9% for the entire period, then around 2,550 people have been deported, of whom the vast majority were Ukrainian citizens, many of whom were living in Crimea when Russia invaded and annexed the peninsula and / or have close relatives in Crimea. .

CHRG stresses that Russia is violating people’s freedom of movement and residence, and that it is obliged to ensure that Ukrainians are not restricted in their civil or socio-economic rights because they don’t have this or that Russian document.

Crimea is part of Ukrainian territory and neither Russia, nor any other country, has the right to restrict the rights of citizens on the latter’s own territory.

Russia’s attempts to deny that it is illegally occupying Ukrainian Crimea have been rejected by the UN General Assembly, OSCE, all European structures and democratic states.  The International Criminal Court concluded back in December 2016 that Russia’s actions since February 2014, including the occupation, constitute “an international armed conflict” which falls under its jurisdiction.  Worth noting that Russia agreed its territorial borders, with this meaning that Crimea is part of Ukraine,  in numerous international treaties which it has not withdrawn from.

Its application of Russian legislation on occupied territory is in flagrant violation of the Geneva Convention relative to the Protection of Civilian Persons in Time of War. Article 49 of this Convention specifically prohibits “individual or mass forcible transfers, as well as deportations of protected persons from occupied territory to the territory of the Occupying Power or to that of any other country, occupied or not”.

Under Russian occupation, it swiftly became difficult, even impossible, to find work, receive medical care, social security payments, register children in schools, etc. without Russian citizenship.  All of this, as well as the violations of the right to free movement and residence, are in violation of the International Convention on the Elimination of All Forms of Racial Discrimination.  They doubtless form part of Ukraine’s submission to the International Court of Justice at the Hague regarding violations of this UN convention and that against financing terrorism.

Even without considering the mounting number of political prisoners in occupied Crimea, the scale of rights violations is great.  New CPHG monitoring of websites in July and August found that there are 30 sites which are either totally or partially blocked on the peninsula, with these including top Ukrainian media, known for independent and hard-hitting journalism, including on the subject of Crimea.

This is much worse than in Russia, with only seven of the thirty sites blocked during the monitoring period in Moscow.  CHPG expert Iryna Sedova points out that they were only able to find decisions regarding five sites on the official website of Russia’s effective censor Roskomnadzor.  This means, she adds, that the vast majority of the sites were blocked unlawfully, even by Russian standards.

As reported earlier, the monitoring also found mounting hate speech in media under Russian control towards ethnic Ukrainians, Crimean Tatars and Muslims.  Sedova is convinced that the blocking of Ukrainian websites deprives Crimeans of access to other points of view and makes people more susceptible to Russia’s aggressive propaganda, including of a military nature.

Russia has already convicted one journalist Mykola Semena on absurd charges for expressing his point of view regarding Crimea, and three young Crimean Tatars are currently under criminal investigation for critical reposts on social media or for comments on an independent radio station.  Even more ominous have been the overtly repressive measures against activists from the Crimean Solidarity initiative which supports political prisoners and their families, and circulates information about the repression.  These include Nariman Memedeminov, a civic journalist in detention since March 2018 on surreal charges pertaining to YouTube blogs from 2013, and a number of other Crimean Solidarity activists arrested on ‘terrorism’ charges and facing huge sentences for supposed involvement in Hizb ut-Tahrir, a peaceful pan-Islamist organization which Russia’s Supreme Court declared ‘terrorist’ without ever providing a good reason.