Russia found in violation of the right to life over Beslan School attackBeslan: No Answers, Only Prosecution of Slain Victims’ Mothers Who Dared to ProtestBeslan: 11 years without answersCourt in Strasbourg accepts case against Russia over BeslanBeslan: Russia finally forced to answer before the European Court of Human RightsMothers of Beslan seek answers through StrasbourgRemember BeslanTruth about Beslan blockedBeslanBeslan: Eight years on, still no answersBeslan: In Memory and MourningBeslan Six years on100 lessons on BeslanRemembering BeslanOn the Fifth anniversary of BeslanFamilies of BeslanBeslan: four years and no answersCriminal investigation initiated against members of “Voice of Beslan”“Voice of Beslan” will not be silenced«Voice of Beslan: Only the truth»
• Topics / News from the CIS countries 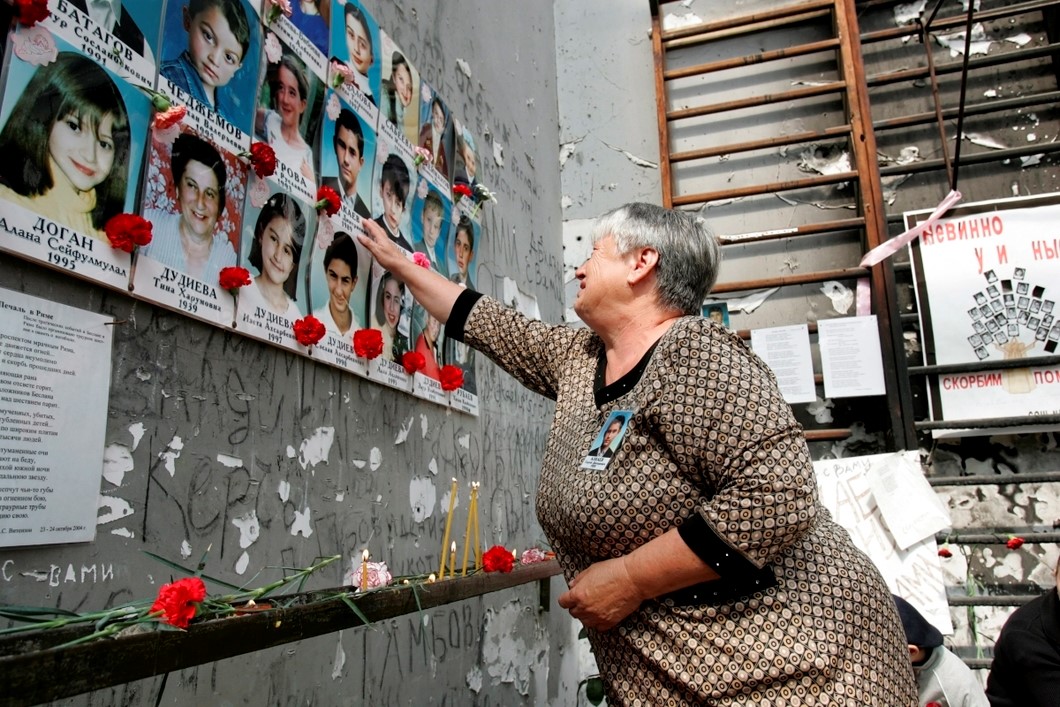 It is 14 years today since the storming of School No. 1 in Beslan (Russia) at the end of a three-day siege resulted in the deaths of over 330 people, 185 of them children.

Russia has, since 2005, called 3 September the ‘Day of Solidarity in the Fight against Terrorism’. Such solidarity did not stop the prosecution of at least four mothers of children killed during the storm for their silent protest at a remembrance meeting on 1 September 2016, when they and one other woman removed their cardigans.  Underneath, each was wearing a T-shirt with the words: “Putin is the Executioner of Beslan’ [Путин – палач Беслана].  All of them were first surrounded by FSB, then later seized and sentenced to fines or community work for supposedly ‘not obeying a police officer’ and ‘violating the procedure for holding meetings’.

This was only one of the forms of harassment over the last 14 years of those who demanded answers to vital questions about the siege of the school, lies told about it in Moscow and the decision to storm it, using tanks and heavy artillery.

The attack on the school began during ‘First Bell’ at around 9 a.m. on September 1, 2004,  This is an important day for children and their families, and there were over 1100 children, family members and teachers in the school.  The authorities in Moscow consistently lied about the numbers, claiming there were around 300, though it is clear that they were aware of the real number from soon after the siege began.  A few men were killed in the first two days, however most of the deaths and injuries were from explosions, fire and the storming of the building on Sept. 3.

The following are details from the European Court of Human Rights’ judgement (in the Case of Tagayeva & Others v. Russia) from 13 April 2017.

ECHR found multiple violations of the right to life over Russia’s failure to take preventive measures against the terrorist attack on the school in 2004, and over the subsequent storming of it. The 409 applicants were awarded a total of almost 3 million Euros.

There was unanimous agreement among the judges that Russia had failed to take proper measures to protect the children, their families and teachers. They found that there had been a violation of Article 2 (the right to life) of the European Convention on Human Rights, because important preventive measures had not been taken.  This was despite the fact that the authorities had had several days warning, with specific information that a terrorist attack targeting an educational institution was planned.  The measures that had been taken were inadequate, with no attempt to heighten security at the school or to warn the school administration and the public of the danger.  There had also been no sufficiently high-level structure responsible for handling the situation.

The Court’s judgement is certainly shocking, especially with respect to the investigators’ failure to even provide an inventory of the weapons used, despite credible evidence that there was use of “indiscriminate weapons capable of putting at risk the lives of anyone within their impact radius, namely grenade and rocket launchers, flame–throwers and the tank gun”.   The Court noted that this was a major failure impeding conclusions about the authorities’ actions in general and individual responsibility.