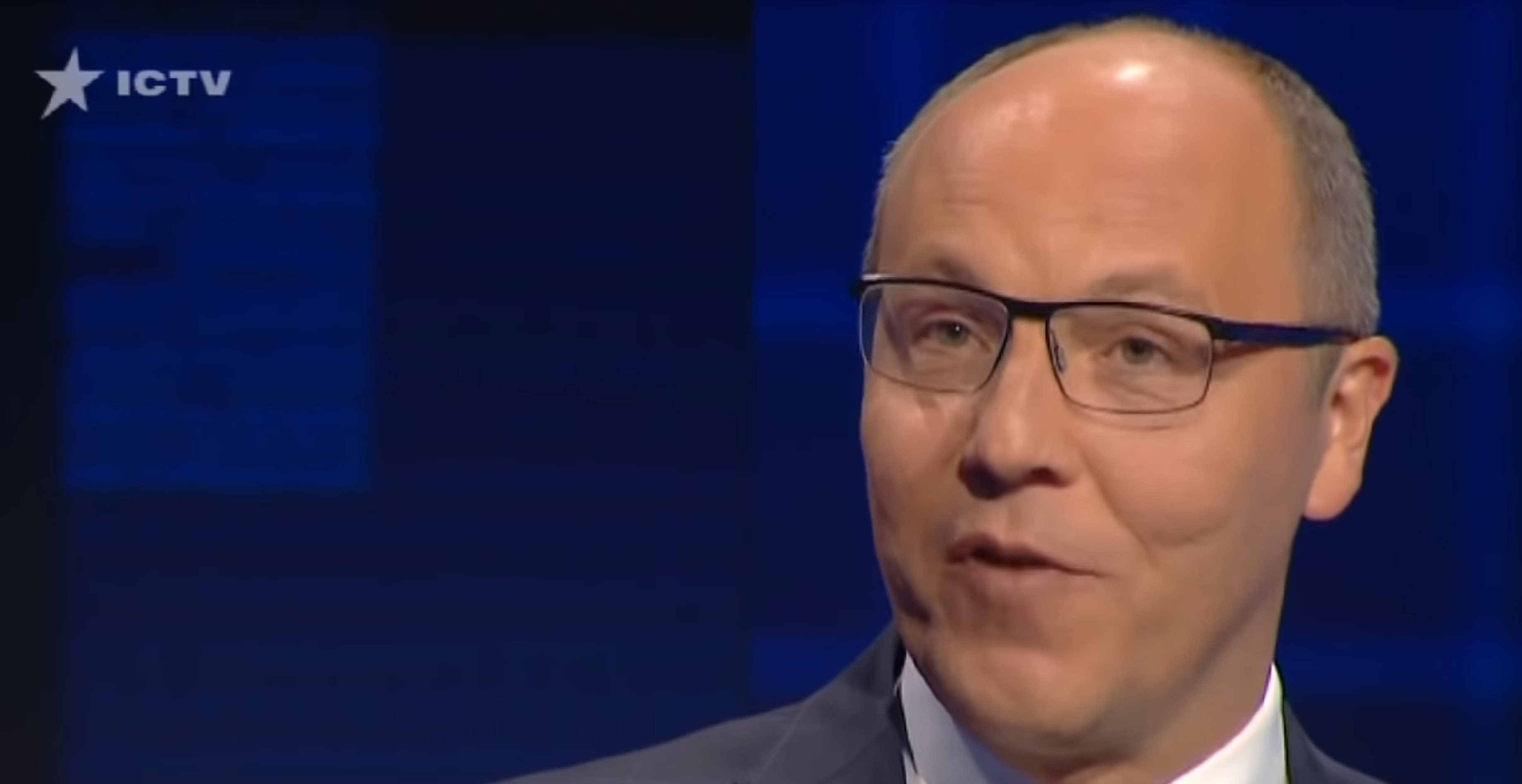 Russia has been caught brazenly fabricating a ‘scandal’ around invented praise of Adolf Hitler by Andriy Parubiy, speaker of Ukraine’s Verkhovna Rada, with some Ukrainian media and politicians helping to spread the lie.  Moscow probably doesn’t care that the fake has been noted, and a quick Google check will explain why.  Type in ‘Parubiy, Hitler’, and you’ll find pages of entries, most with shocking headlines and very few explaining what  Parubiy did in fact say.

Fortunately, Hala Sklyaevska from Detector Media did check the source and then follow the trail of distortion and manipulation in the Russian media, and then back to Ukraine.

In ‘How Parubiy was turned into a Hitler fan’, Sklyarevska looks at the propaganda uses made of the ICTV ‘Freedom of speech’ program on 3 September (posted on YouTube the following day) where the Verkhovna Rada Speaker responded to questions from a panel of three people, including well-known political analyst Volodymyr Fesenko.  The latter noted the situation following the Constitutional Court’s ruling in May 2018 finding the highly contentious Law on National Referendums passed under President Viktor Yanukovych unconstitutional, and asked whether a new law would be introduced.

The question was quite reasonable, and so too was the answer.  Parubiy said the following:

“You’re right, with respect to the law on referendums. This is one of the questions which we must resolve, and resolve very competently and fairly. (..) However there is ongoing discussion over the law on Ukrainian referendums. I am myself a strong supporter of direct democracy.  I even studied it at an academic level. Incidentally, I can tell you that the person who most practised direct democracy was Adolf Aloisovich in the 1930s.  And we should remember this since during those 1930 years this was one of the key means of manipulation.  This law, therefore, must be responsible, including giving the possibility (of voting) at the local level”.

He then goes on to point out that in Switzerland local referendums are most common.

Fesenko’s reaction to the comment about Hitler, his nodding smile and comment that,  indeed, some countries don’t use referendums at all, make it clear that he understood fully that Parubiy had been warning about the manipulative use made by Hitler of direct democracy in the 1930s as a weapon against democracy.  This was confirmed by the crucial sentence that the law must therefore be responsible.

There was  nothing contentious about any of this which was, of course, the reason why all of the Russian media who pulled certain words out of context, were careful not to give the full quote.

The Russian state-owned RIA Novosti came out with the headline: ‘Speaker of the Rada calls Hitler “the biggest” democrat’.  It quoted Parubiy’s words about being a supporter of direct democracy and about Adolf Aloisovich having been ‘the biggest person who practised direct democracy in the 1930s”.

It then says that “he called on people to not forget the contribution the Fuhrer made to its development”, and then claims that this is not the first time that Ukrainian politicians and public figures have made “such radical statements”.

This is pure distortion of the clear message of warning in Parubiy’s words. He did not call of the audience to remember Hitler’s “contribution”.  He reminded them of how Hitler had actively used direct democracy for his own purposes, and this was very evidently the way his comment was understood by Fesenko, the person who had raised the subject.

Around four hours later, the Ukrainian website Strana.ua, which generally follows the line taken by the current regime in Russia about all Ukrainian matters, came out with a version very similar to that in RIA Novosti.  There was the same manipulative choice of phrases and claim that he had talked about Hitler’s “contribution to the development of democracy”.

If Strana.u and ‘Komsomolskaya Pravda in Ukraine’ could be expected to parrot the distortion initiated by RIA Novosti, the same is not true of the other Ukrainian media who first virtually copy-pasted the Russian original of the lies: Glavred; Kommentari and HolosUA. Glavred did, at least, delete the material and there is now only a cached version, while HolosUA followed RIA Novosti and Strana.ua in only giving a hyperlink to the source which would prove that their material distorted the original.

Sklyarevska has followed this entirely fictitious ‘scandal’ and names numerous other sites in both Ukraine and Russia who help circulate this overt distortion of the truth.

‘Zvezda’, the TV channel closely linked with Russia’s Defence Ministry, has a photo of Hitler (obscuring the link to the ICTV program) and a text which repeats the original lies without even attempting to provide the real context.

Russia’s NTV provides a link only to the ICTV website, thus making it impossible for their audience to even check the original source.

Most, but not all, Ukrainian sources are either those linked to the Russian-backed Donbas militants or Ukraina.ru which, despite its title, is a Russian-sponsored enterprise, with its base in St. Petersburg.

Only one Ukrainian publication Zaxid.net did provide the entire quote and explain the context.

Then on 5 September, Viktor Medvedchuk, a very controversial Ukrainian politician and close friend of Russian President Vladimir Putin, got in on the act.  His press service quoted him giving a ‘lesson’ to Parubiy and asserting that “in any democratic country after such a statement the Speaker would have to resign or parliament would have to dismiss him”.

This was followed up and made much of by channels like ‘112.ua’ and ‘News One’ which are increasingly producing fakes or distortions, even about Ukrainian political prisoner Oleg Sentsov, that seem closely harmonized with the Kremlin line.

Having encountered no correction from the reporter of his misrepresentation of Parubiy’s words, Rabinovych announced that he would be taking Parubiy to court ‘for propaganda of fascism’.

It is to be hoped that Parubiy lodges a counter-suit, since Rabinovich did not just misinterpret, but added words that Parubiy did not utter.

There is more in the Ukrainian Internet that Sklyarevska reports, but it is worth noting that ‘the story’ has already been taken up by the Russian state-funded ‘RT’ which broadcasts abroad in English and some other languages.

RT has been taken to various press standards committees for its manipulative reporting and it was careful to not repeat Rabinovych’s lies in its text, entitled Ukraine’s controversial parliament speaker to be sued after calling Hitler ‘biggest democrat’.  It instead gives snippets of what Parubiy said, and swiftly moves away, after a rather inadequate translation, from the key message about the use of direct democracy for manipulating the population.  It is unlikely that readers would understand that RT was distorting the message when it writes that “The apparent implication that Hitler was a prominent figure in developing democratic institutions angered some people in Ukraine, including MP Vadim Rabinovich, who said on Wednesday he was taking the speaker to court for his remarks and expected Parubiy to resign.”

RT then gives a very slanted summary of Parubiy’s political roots (until 2004 in far-right parties) and ends with the extraordinary assertion, that “some critics say he is personally responsible for the mass killings in central Kiev [sic] in February 2014…”

Moscow has long understood that such fakes and distortion are taken much less seriously if repeated by those directly receiving state-funding or known for their pro-Kremlin position.  It remains to be seen how many western media will have been fed the supposed ‘news’ about the Ukrainian Speaker’s innocuous (if unfortunate) words.

They would be well-advised to listen to the Ukrainian-language origin before they copy-paste lies.  While Russia only prosecutes and imprisons its own citizens for comments or reposts on social media condemning Russian aggression against Ukraine, etc. and circulates propaganda with impunity, other countries provide defence against open defamation.