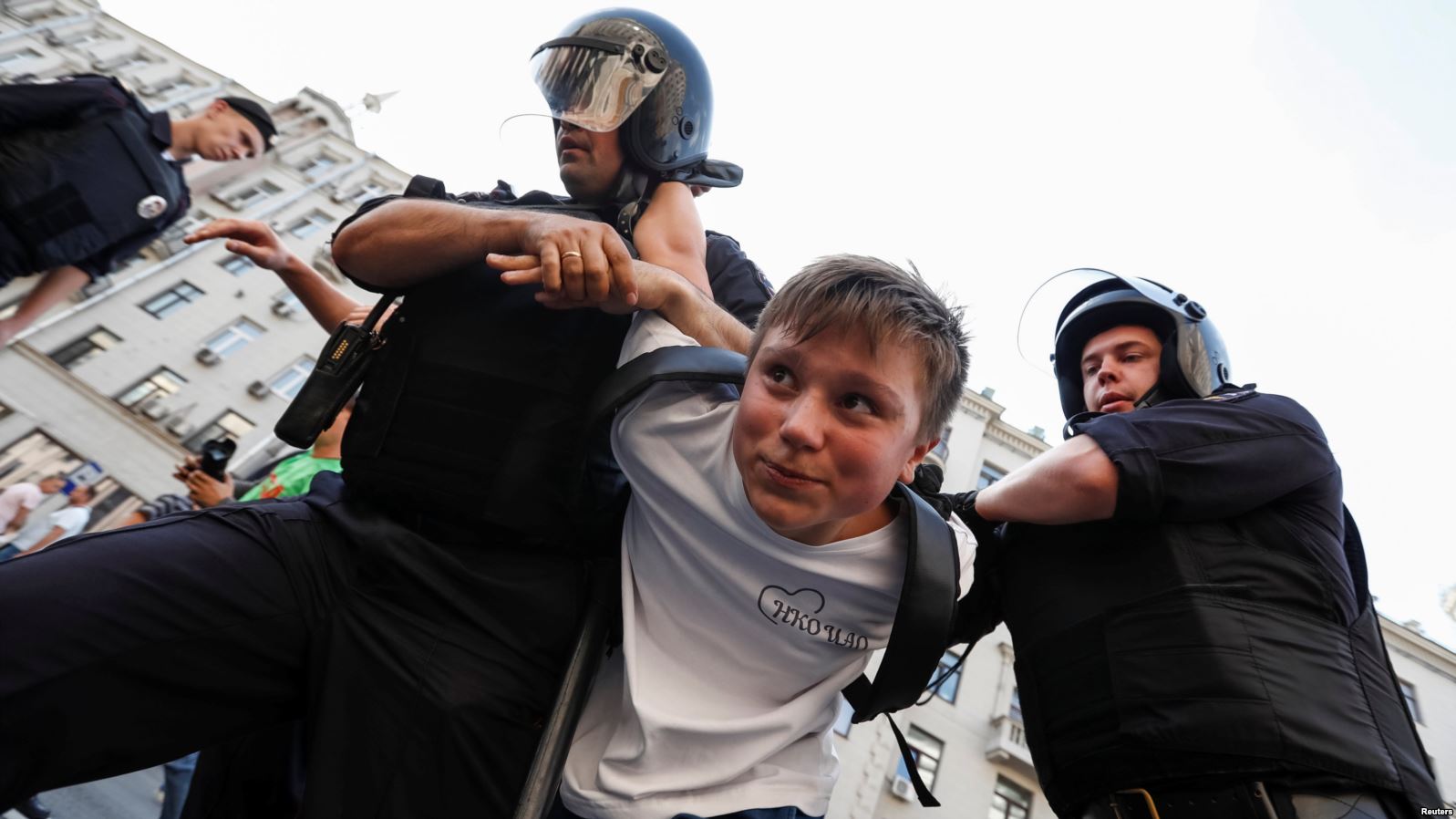 Thousands of anti-Kremlin demonstrators have taken to the streets in Russia to protest the government’s plan to raise the retirement age in rallies coinciding with regional and local elections nationwide, triggering tense confrontations with police and resulting in hundreds of detentions, according to a rights-monitoring group.

The Russian news portal OVD-Info, which tracks the arrest of protesters, said more than 830 demonstrators were detained on September 9 at protests in 33 towns and cities across Russia. The largest number was in St. Petersburg, Russia’s second-largest city, where 354 demonstrators were held, OVD-Info reported.

The rallies were announced last month by opposition politician Aleksei Navalny, who is currently serving a 30-day jail sentence for what authorities call violations of the law on public gatherings related to street rallies in January.

The elections, which included a vote on executive-branch heads in 21 of Russia’s 85 administrative areas, was the first major test for the government of President Vladimir Putin and Prime Minister Dmitry Medvedev since it proposed raising the retirement age.

The original plan would have increased the retirement age for men from the current 60 to 65, and from 55 to 63 for women. Later Putin modified the proposal so women would retire at age 60.

Police on September 9 detained 839 people at the election-day protests, including 354 in St. Petersburg, 129 in the Urals city of Yekaterinburg, 60 in the southwestern city of Krasnodar, 48 in Perm in the Ural Mountains. Moscow and the Siberian city of Omsk saw 36 and 32 detentions, respectively, according to OVD-Info.

A demonstration in Moscow’s Pushkin Square attracted around 2,000 people, who chanted slogans such as "Russia without Putin" and held signs reading, "Putin, when will you go on pension?"

Riot police ordered the crowd to disperse or face prosecution.

But some of the protesters started marching toward the Kremlin before riot police halted them with metal barriers and sometimes rough detentions.

In St. Petersburg, a crowd of around 1,000 people shouted "shame" and held signs calling for Putin’s resignation.

The protests started in Russia’s Far East, where Navalny’s team said that more than 400 protesters took to the streets in the city of Vladivostok chanting "No to pension reform" and calling on Putin to resign. Regional authorities put the number of protesters in Vladivostok at 120.

Organizers reported that police detained the head of Navalny’s headquarters in the Far East city of Khabarovsk.

Video footage from the demonstration in the Siberian city of Novosibirsk showed a tense standoff between riot police and protesters, who chanted "shame, shame." Police in the video https://rferl.org/a/russia-retirement-pensions-protests-six-cities/29480388.html  are seen trying to carry away a person by force.

Authorities detained several prominent Navalny associates on the eve of the protests as well.

Georgy Alburov, the investigations chief for Navalny’s anticorruption foundation, said on Twitter that he was detained in Moscow on September 8 and was being accused of violating laws on public events in connection with the election-day protests.

Alburov said his detention caused him to miss his train to St. Petersburg, where he had planned to take part in a protest against the pension-reform plan.

In addition to the federal administrative areas -- including the city of Moscow -- that were electing regional heads in the September 9 polls, 16 regions were electing legislatures, while other areas were holding mayoral and other local ballots.

Approval ratings for Putin, Medvedev, and the ruling United Russia party have fallen noticeably since the proposed pension-age hike was passed in its first reading in the lower house of parliament in July.

"In this situation, the authorities are interested in suppressing turnout a bit and making sure only ’their’ electorate shows up and votes the way they are supposed to," Stanislav Andreichuk, an elections analyst with the independent Golos election-monitoring group, told RFE/RL. "They will do what they can to get protest voters to stay home."

In Moscow, however, authorities have implemented an aggressive get-out-the-vote campaign, including promises of free concert tickets to voters and setting up polling stations outside of the city to enable voters spending the summer at their dachas to participate.

Sergei Sobyanin, the Kremlin-backed incumbent mayor who has run the capital since 2010, was expected to receive about 70 percent of the vote in the Moscow mayoral election.

Two independent liberal candidates were not allowed to run against him, while his four registered opponents are virtual unknowns.