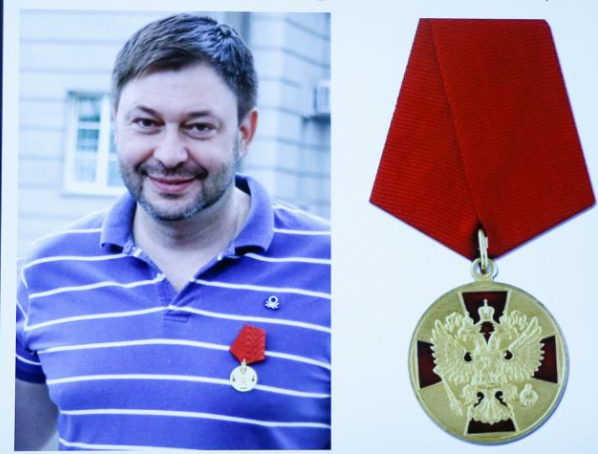 Russia’s Union of Journalists has declared Kyrylo Vyshynsky, a Ukrainian journalist accused of treason for his propaganda support for Russia’s annexation of Crimea, its laureate for the Kamerton Award, named after Anna Politkovskaya, the slain Novaya Gazeta journalist, human rights defender and bitter Kremlin critic.  Olga Musafirova, Novaya Gazeta’s Special Correspondent in Kyiv has reacted with disgust to the news, calling it “plummeting the depths on a cosmic scale”.

Vyshynsky was arrested by Ukraine’s Security Service [SBU] on 15 May 2018 and charged with state treason over his role as director of RIA Novosti Ukraine, particularly during the period around Russia’s invasion and annexation of Crimea.  He is alleged to have personally taken part in propaganda campaigns aimed at supporting annexation and the joining of the peninsula to the Russian Federation, for which he was awarded a medal ‘For services to the Fatherland’ by Russian President Vladimir Putin.  He was also reported to have received a medal ‘For the return of Crimea’ for such propaganda services.

The decision to award Vyshynsky, who received Russian citizenship in 2015, the prize received a lot of attention on Russian state-controlled media.  It is probably no accident that it came shortly after Ukrainian filmmaker and Kremlin hostage Oleg Sentsov was nominated for the Nobel Peace Prize and that it was initiated by a union that has remained totally silent about a Russian state television channel’s involvement in the showing of a probably torture-induced ‘confession’ from Stanislav Aseyev, the Ukrainian journalist imprisoned by Kremlin-backed militants in Donbas for well over a year (details here)..  There have been very widespread demands for the release of Sentsov and Aseyev, as well as of at least 70 Ukrainians whom Russia is imprisoning on politically motivated charges.

Russia’s attempts to treat Vyshynsky as a victim of Ukrainian political persecution have had relatively limited success, and Musafirova is just one of many journalists who reacted with disgust to the news of the Journalist Union’s choice of laureate.

Musafirova said that she could not think of anything more low than this.  “After all Anya [Anna Politkovskaya] fought all her life against that very regime which awarded Vyshynsky a medal ‘For the return of Crimea’.  This is totally Orwellian”.

She called the presence of Vyshynsky in a shortlist of nominees for the award “a personal insult to the memory of Politkovskaya”.

According to the Novaya correspondent, the Russian Journalists’ Union had still had some members in 2014-2015 who still tried to oppose Russia’s aggression against  Ukraine. However, around a year ago, there was a ‘purge’, she says, and the management changed, with the new people all playing to the Kremlin’s tune.  Musafirova notes how low people who call themselves journalists have sunk, citing in particular the Union’s silence over the involvement of a Russian TV channel in the cruel ‘confession’ stunt with Aseyev.

Detector Media heard similar reactions from other journalists.  Aider Mudzhabaev, Deputy Director of the Crimean Tatar TV ATR, called the Union of Journalists of Russia “a subdivision of the Kremlin and FSB” who have supported the annexation of Crimea and have a branch of their union in Crimea, while also collaborating with the so-called ‘Donetsk and Luhansk people’s republics’ and “other such fake structures”.

Matsuka sees this as a propaganda stunt, and notes the lack of any protests in support of Vyshynsky until now “when scandal broke out over Stanislav Aseyev whom the Russians are holding in Donetsk.  For them he is for some reason a spy, and he doesn’t have any lawyer or anybody”.

Russia is pretending concern about freedom of speech, Vyshynsky and journalists generally purely for its own purposes, Matsuka says, adding that this is not defence of freedom of speech but the nth attempt to prove that everything’s bad in Ukraine.

As reported, there was a very noticeable difference in reaction within Ukraine and abroad to the arrest of Vyshynsky and the search of the RIA Novosti Ukraine offices.  Unlike after the arrests of Ruslan Kotsaba and Vasyl Muravytsky, the concern in Ukraine was less whether the alleged actions warranted the charge of state treason, as whether the SBU could provide proof to back its accusations.

The reaction from certain international media watchdogs was quite different.  Under a photo of Putin described as showing him “opening a bridge that will connect the Russian mainland with the Crimean Peninsula” (and without a word about this being illegal), the Committee to Protect Journalists, effectively accused Ukraine of “criminalization of alternative news and views” (more details of the reactions here).

In reporting the award on 10 September 2018, RIA Novosti stated that Vyshynsky had been in detention now for over 100 days, accused by the SBU of “support for the self-proclaimed republics of Donbas and of state treason”.  It did not see fit to elaborate upon the latter charge, though it is that which is crucial, and which, at least initially, certain western organizations did rather minimize.  The charges of state treason, under Article 111 of Ukraine’s Criminal Code, could carry a sentence of up to 15 years’ imprisonment, however it remains to be seen whether the SBU can substantiate their allegations in a court of law.  Despite the claims made by Vyshynsky and Russian propaganda sources, the verdict in his future trial has not been written already as the recent overturning of the sentence against Dmytro Vasylets and Yevhen Timonin demonstrated.

The SBU asserts that in 2014, Dmitry Kiselyov, Director of the Russian state-owned ‘Russia Today’ and described by the BBC as “Russia’s chief spin doctor’, ordered that Vyshynsky be appointed head of the Ukrainian office of Russia Today. The 51-year-old is accused of having taken part, on instructions from Moscow, in Russia’s information war against Ukraine.

The SBU allege that Vyshynsky founded a number of legal entities, including Interselect, which is known as RIA News Ukraine.  They assert that the network of entities was created primarily “to conceal the Russian sources of financing for the resource and the contacts between this structure and the Moscow office of Russia Today”.

Vyshynsky is accused of having gone to Crimea during Spring 2014, just prior to Russia’s invasion, where, on the instructions of the Russia Today management, “he personally took part in propaganda campaigns aimed at supporting annexation and the joining of the peninsula to the Russian Federation. For his action in support of the aggressor state, Vyshynsky was, via a secret decree from the Russian President awarded a medal: ‘For services to the Fatherland’.

This is the only award published on the official SBU website, although media reports and the Facebook page of Prosecutor General’s Office spokesperson Larisa Sarhan report that another Russian award – ‘For the return of Crimea’ was found, with Sarhan providing a photograph of that medal.

The International Criminal Court’s Chief Prosecutor has already established that the annexation and occupation of Crimea constitutes an international armed conflict.  It was one that was started by Russia’s invasion, deploying soldiers without insignia, so an award to any Ukrainian for their role in those events would be especially incriminating.

The SBU report includes a screenshot of a report from RIA Novosti Ukraine from 16 March 2018, under the title: “Referendum in Crimea: not leaving, but returning’.  The text visible reads: “However awareness of this will come later to the high officers of the geopolitical leaders of the world.  Today Crimea and Crimeans are triumphant.  And pin their hopes on Russia”.  The photo is of Russian flags and a child smiling.

A photo is also shown of Vyshynsky wearing the ‘For services to the Fatherland’ medal .

The SBU asserts that after returning to Kyiv, Vyshynsky hired journalists to prepare material in support of the so-called ‘Donetsk and Luhansk people’s republics’ [D/LPR], which in Ukraine are deemed terrorist organizations.   Two examples are provided, both of them undoubtedly providing a pro-Russian and highly misleading impression of the military conflict in parts of the Donetsk and Luhansk oblasts.

In order to conceal their activities, the SBU allege, ‘Russia Today’ used a setup involving a contract between Interselect and a company in Belgrade (Serbia).  it is alleged that this firm is a front which was used to send almost 53 thousand Euros of Russian origin each month to the accounts of the Ukrainian enterprise controlled by Vyshynsky. He is claimed to have told his subordinates that he understands “that we have an information war but we need to at least create the appearance of objectivity”.

“It should be stressed that RIA Novosti Ukraine is not officially part of ‘the Russian state news agency’, is not registered in Ukraine as mass media, is not listed on the register of news agencies under the Law of Ukraine “On Information Agencies”, and is not registered under Ukrainian law as an office of any of the Russian state news agencies registered in accordance with Russian national law. In accordance with item 3 of paragraph 2 of article 26 of the Law of Ukraine “On Printed Mass Media (Press) in Ukraine”, a journalist is obliged to submit objective and reliable information for publication.”

Vyshynsky has, since its arrest, ‘renounced his Ukrainian citizenship’.  Although widely and uncritically reported, especially by Russian media, this move is legally meaningless, especially given that he is facing extremely serious criminal charges directly based on the fact of his work, as a Ukrainian citizen, for the foreign country whose ‘foreign policy’ involved illegally invading and annexing Ukrainian territory.