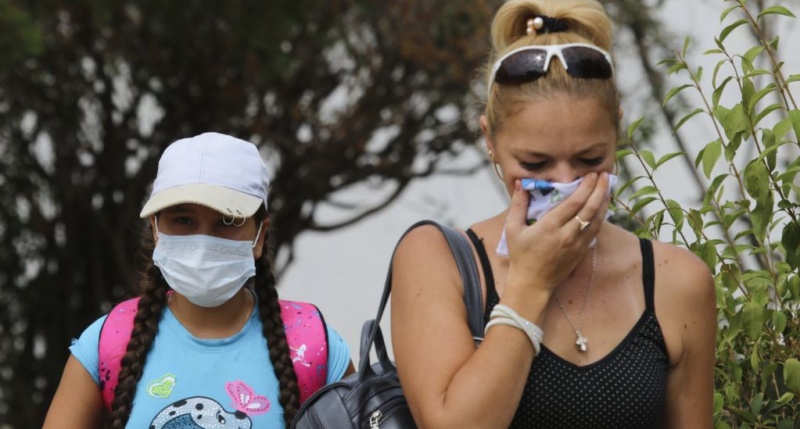 Armyansk, in Northern Crimea is suffocating from new toxic emissions and the Russian occupation authorities have finally announced that a state of emergency is being declared.  The Crimean Titanium Factory  responsible for the emissions has, meanwhile, decided to claim it is all Ukraine’s fault and ask the Russian occupiers to initiate criminal proceedings.

The first release of a toxic emission from Crimean Titanium occurred during the night from 23 to 24 August, 2018.  Although there were extremely alarming reports on social media in Armyansk, and the effects were felt in the Kherson oblast which borders Crimea, no real measures were taken until 3-4 September.  Even then, the occupation authorities tried to downplay everything, and avoid using words like ‘evacuation’, however children were sent away for two weeks.  On 14 September, this was extended for a further week.

Those in affected areas reported a yellowish fog over the city and that things were covered in an oily slimy substance.  From the rust appearing on metallic items, environmentalist Margarita Litvinenko suggested back on 28 August that it was likely that there had been a leak of sulphuric acid.

It seems now that what was emitted, because the retention basin near the plant had dried up, was a sulphur anhydride which, combined with water, can turn into sulphuric acid. The anhydride causes respiratory problems, irritation to the eyes and throat, allergic rashes and other reactions.

While some of the reports on social media may be exaggerated, the photos showing fruit, the leaves of trees, etc, all covered in a rust-like substance make it clear that the  consequences will be long felt.

On 14 September, there were reports on social media that the situation had deteriorated again, that it was impossible to breathe on the streets.  There was intense concern that the children were supposed to be returning.   One person said that just going to take the rubbish out, he’s almost suffocated, with the fumes burning his throat, nose and lungs.

The occupation authorities had said that the situation could be repeated if the hot weather returned, but claimed that this was only if the relevant measures were not taken.

It is not clear that measures have been taken.  On 12 September, Primechania.ru reports, the de facto deputy prime minister Ihor Mykhailychenko reported that there had been no excessive concentration of toxic substances.  Meetings of the operational headquarters were cancelled.

The same publication also reported that Armyansk residents are terrified and suffering physical effects, but are afraid to talk about them.  “Crimeans are frightened of the press as they’re convinced that after the publications, problems may arise with the city administration and officials.

People have told Primechania that after their stories were described in the press, that people from the management of the Titan factory and from the local city administration were extremely annoyed at their being so talkative.  They force people, whether in the form of advice, demands or downright ultimatums, not to speak to the press.

The publication notes that the city residents appear to support such policy despite the fact that it was only after publications in the press that their children, with choking coughing and allergic rashes, were taken out of Armyansk.

The newspaper quotes a holiday-maker who also reports that people are suffering the same kinds of symptoms.  She asked to remain anonymous because she feared problems when she returned home.

Doubtless because of the greater level of anonymity, people are more open on social media.  While the occasional Internet user writes that this is all panic-mongering and that there are no problems, there are floods of responses, describing how mothers and children are both suffering in sanatoriums, with a temperature, vomiting and other symptoms. Hospital staff proved just as unwilling to speak to the press.

On 14 September, Novaya Gazeta reported that the management of Crimean Titanium had asked Russia’s FSB and Investigative Committee to initiate criminal proceedings against the Ukrainian authorities.   They assert that the acid tank is on the (administrative) border between Crimea and the Kherson oblast, and that one of its parts is not under their monitoring.

According to their version of events, Ukraine’s leaders wanted to avenge themselves against Crimeans for their supposedly expressed wish to “join the Russian Federation” and had taken a range of actions, capable for causing an environmental catastrophe in the Kherson oblast and what they call “the territory of the Russian Federation”.

In fact, Ukraine’s ‘Cyber Alliance’ have made public a number of documents that demonstrate that the same factory had multiple problems earlier which the occupation authorities ignored.

More on how Crimean Titanium, owned by Ukrainian oligarch Dmitry Firtash, and those providing it with raw materials from mainland Ukraine have evaded sanctions can be found here. It is clear, however, that the situation has been waiting to happen for a long time.

One of the major issues is that the plant’s etention basin previously received water from mainland Ukraine through the Dnipro River.

The water supply stopped after annexation, with Russia refusing to repay debt for the pumping of water and to sign a new contract in which Crimea was identified as occupied territory.  Pressure is rising on Ukraine to now simply provide the water, however several high-ranking Ukrainian officials have reiterated in recent weeks that this will happen only when Russia stops occupying the peninsula.