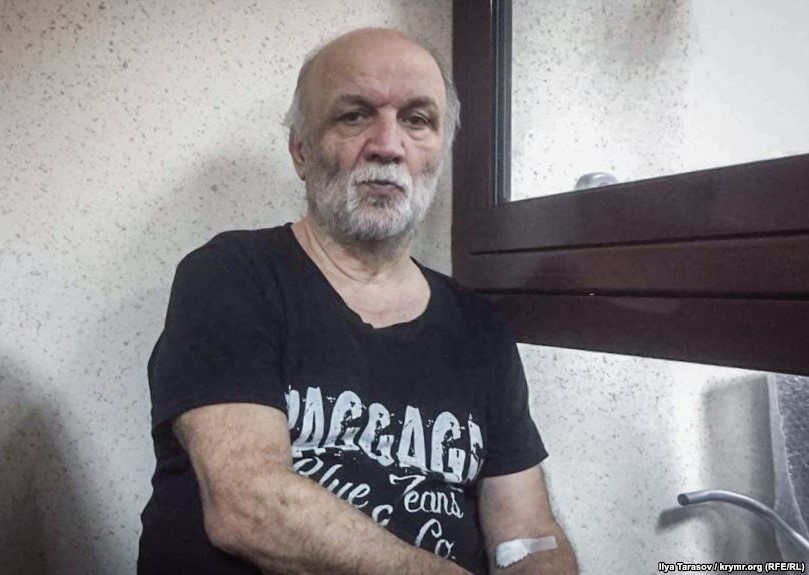 Asan Chapukh is in such poor health that a hunger strike could immediately place his life in danger, yet the 65-year-old veteran of the Crimean Tatar national movement has been left no alternative.  The Russian occupation regime is refusing to release him from politically-motivated detention, yet is denying him proper medical care, despite a microstroke suffered soon after his arrest in November 2017 and dangerously high blood pressure.

According to Chapukh’s lawyer Aider Azamatov, Chapukh began refusing food four days ago and the management of the Simferopol SIZO [remand prison] have been informed.  His main demand is that he be at least allowed proper treatment.  He is in a shocking state, Azamatov says, with high blood pressure, constant headaches and his left leg and arm still not functioning after what is believed to have been a microstroke.

He is being held in the medical unit of the SIZO, yet without any medical care being provided, and says he will end his hunger strike only once they begin treating him, and not just giving him a pill to ease this or that symptom.

A Russian ‘investigator’, whom Chapukh has never seen before, turned up at the SIZO on September 19 and promised to find out why he is not receiving any medical treatment.

Azamatov plans to lodge complaints over the failure to treat Chapukh with the Russian-controlled police and prosecutor, as well as Russian ombudswoman Tatyana Moskalkova.

There are serious concerns also about the health of Bekir Degermendzhy, who has invalid status because of severe bronchial asthma and should not therefore, even according to Russian law, have been placed in detention.  He has difficulty breathing without an oxygen mask.

Russian lawyer Nikolai Polozov noted back in December that the treatment of these two men was tantamount to torture.  Since then there have been no ‘investigative activities’ at all, and the men are effectively imprisoned without trial.

Polozov is carrying out an independent probe into the circumstances behind Vedzhie Kashka’s death.  He and her family are convinced that she died as the result of excessive and disproportionate use of force by the officers carrying out the arrest. Russia’s National Guard, who were involved in this ‘special operation’, has refused to release any information, citing ‘the fight against terrorism’. The pretext is pitiful and only heightens suspicions, already high given that all CCTV footage was removed.

It took Polozov repeated efforts and a court suit to force the occupation authorities to show him the material of the ‘check’ carried out over Kashka’s death.

This states that Turkish national Yusuf Aitan had handed Kashka 60 thousand roubles (just over 900 USD), which the officers involved in the ‘operation’ tried to take from her.  This was purportedly with a protocol recording the removal, however her signature is not on it, and the report states that she refused to hand the money over.  It also says that the sharp deterioration in Kashka’s health happened at this point.

It was clear from the outset that the operation on 23 November 2017 was aimed at discrediting the Mejlis of the Crimean Tatar people.  Russia was ordered by the UN’s International Court of Justice to revoke its extraordinary ban on this self-governing body of the main indigenous people of Crimea back on 19 April 2017.  It has refused to do so and is now making clumsy attempts to justify the ban, though any success can only be with an internal audience receiving its ‘information’ from Russian propaganda channels. These assiduously avoided mentioning the attempt to detain 83-year-old Kashka, and claimed that they had found ‘ammunition, drugs and material of an extremist nature” during the search “of Mejlis” members.  It was even claimed that machine guns had been found, citing “a source in the enforcement agencies”.  The level was extremely primitive, as always with Russia’s arrests of Ukrainians.  The aim is clearly to come out with as many shocking headlines as possible, and then go silent when, later, none of the lurid details can be substantiated.

Not one of the men is, in fact, a member of the Crimean Tatar Mejlis, yet they are constantly referred to as members in the indictment. All four are, however, Polozov explains, activists of the Crimean Tatar national movement, and took part, under a Crimean Tatar flag, in the march in memory of Boris Nemtsov in February 2017.  They have all taken a clear civic stand, attending the court hearings of victims of persecution, etc. and Bekir Degermendzhy actually travelled to Strasbourg to inform about the persecution against his son Mustafa Degermendzhy, and others in Crimea.