The European Court of Human Rights’ politically-motivated denial of justice for Oleg Sentsov100th day on hunger strike: The West has levers it could use to make Russia free Oleg SentsovKremlin uses blatant lies as excuse to not free Oleg Sentsov“The end is near”: Grave Fears for the Life of Kremlin hostage Oleg SentsovMoscow prohibits picket in support of Oleg Sentsov for 84th day of his hunger strikeOleg Sentsov’s Last Birthday in Russian captivity and 61st day on hunger strikeSentsov considers his solo release would be a “total failure” & calls for greater attention to Kremlin’s other political prisonersRussia pushes lies and defamation while hiding Sentsov who is reportedly very weakOn 40th day of Sentsov hunger strike, doctors say crisis imminent, refuting lies from Russia’s OmbudsmanRussian jailed for defence of Sentsov, Balukh and other political prisoners during World CupRussia refuses access to Ukrainian political prisoners Oleg Sentsov & Mykola KarpyukUkrainian MP helps Russian disinformation campaign against Oleg SentsovDetained in Moscow for demanding that Russia #FreeSentsovSentsov’s life on the line in defence of all Russia’s Ukrainian political prisoners means no World Cup as usualEnjoy the World Cup in Russia where you can get 20 years for opposing annexation of CrimeaUkrainian victim of Russia’s first ‘absolutely Stalinist trial” spends 4th birthday in brutal isolationSentsov thrown into punishment cell & sent to the Far North because of protests demanding his releaseUkrainian filmmaker Oleg Sentsov sent to brutal prison north of the Arctic CircleUkrainian filmmaker Oleg Sentsov faces reprisals and transfer to notorious prison over international protest.Cynical motives most likely as Russia again moves imprisoned Ukrainian filmmaker Oleg Sentsov
• Topics / Freedom of expression
• Topics / News from the CIS countries 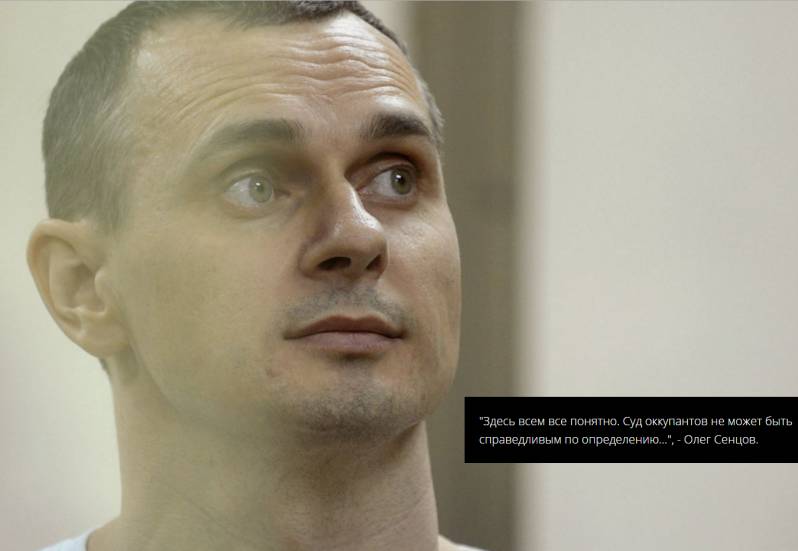 Valeriya Ivashkina, the journalist whose name was on a cynical attempt to defame Ukrainian filmmaker Oleg Sentsov, has announced her resignation from Strana.ua, expressing regret that she took part in the efforts to slur Sentsov’s name.  This was one of at least two attempts to sow doubts about Sentsov’s innocence since the hunger strike which Sentsov began on 14 May intensified international demands for his release.  It can, unfortunately, be guaranteed that the Russian and pro-Russian media who actively pushed this and at least one other attempt to cast doubt about Sentsov’s innocence will go silent on this development.

As reported, during an event about Russia’s politically-motivated trial of Sentsov at the OSCE Conference on Freedom of Speech in Ukraine on 25 June this year, a man in camouflage gear, who had been behaving very aggressively, seized the microphone and claimed that he had tried to take explosives to Sentsov in early 2014.

His apparent ‘confession’ was ridiculed by Sentsov’s lawyer Dmitry Dinze who pointed out that it even clashed with the FSB’s accusations against Sentsov, and would, if true, reveal quite staggering incompetence from the FSB who had failed to uncover it.

The fact that this was not just an innocent attempt to attract attention became clear very quickly.  By that evening, an article had appeared in Strana.ua, with Ivashkina’s name given as the author.

The text was entitled: ‘I transported one of those items”.  Military man in Kyiv makes a statement in the Sentsov case.  It mentions that the situation with Sentsov was discussed at the OSCE conference, claiming falsely that “the Russian investigation asserted that they had found explosives at the filmmaker’s place, however Sentsov and Kyiv deny this”.

The fact that OSCE, the EU and all democratic countries have condemned the political trial and imprisonment of Sentsov and civic activist Oleksandr Kolchenko was muffled, as was the lack of any evidence at all against Sentsov.

The report, with Ivashkina’s name on it, then asserts that a man in military gear made “a sensational confession”.

“From the man’s muddled words it follows that during the annexation of Crimea, he took a certain item over which Sentsov was subsequently convicted.”

All of this garbled and nonsensical ‘confession’ was given in full, with the gist being that Sentsov had some kind of information that Kyiv did not want revealed, and that he was making the statement so that the security service would find the people who had set up Sentsov.

The article then goes on to explain how they had tracked down the man in camouflage, and gives his alleged real name, with the crowning ‘proof’ presumably intended to be a post where this individual says that he was in Crimea in 2014.

As Tetyana Pechonchyk, Head of the Human Rights Information Centre, noted at the time, the speed with which this absurd nonsense was taken up by all Russia’s propaganda media showed that it had been a planned act of provocation.

Ivashkina announced on 20 September that she had left Strana.ua as of that day, after working there for two years. She says that questions had kept mounting, but that she had switched herself off from them. She can no longer do say, she says, adding: “The context is always of significance.  The financing, what is focused on, the choice of topics. If your inner contradictions increase by the day, there is no point in shutting your eyes to this. Journalist is the description of reality, not constructing it. Especially when other people’s fate depends on this, as in the case of the material about Sentsov.  The news about how Oleg in Crimea had supposedly been brought explosives was signed under my name, and publicly I upheld the editorial office’s position.  I made a mistake”.

Strana.ua was created by Ihor Huzhva in February 2016.  Although it claims to objectively report the news, it has consistently taken a stance which is strongly against the post-Maidan government in Kyiv and close to that presented in Russian state-controlled media.

As mentioned, this was not the only occasion that certain Ukrainian media have tried to slur Sentsov. On June 7, Ukrainian MP and then owner of the controversial News One TV channel, Yevhen Muraev made an entirely false assertion about Sentsov in a public broadcast on TV 112 on June 7.  This seems to have been part of a concentrated disinformation campaign which was immediately taken up by Russian state-controlled media who could claim that a Ukrainian MP had “called Sentsov a terrorist”.  As is all too often the case, those Ukrainian media that probably circulated the disinformation quite deliberately were then helped by those other media who simply mindlessly copy-pasted statements that should have been immediately pulled up and corrected (details here).

As with the Malaysian airliner MH17 brought down by a Russian Buk missile, Russian aggression against Ukraine and the Novichok nerve gas attack in Salisbury, the aim of such disinformation campaigns is not necessarily to convince people.  Casting a shadow of doubt, a flicker of uncertainty is enough to enable the narrative that there are several possible explanations in situations where there is, in fact, no doubt.

The lack of any grounds, except political, for the arrest, trial and monstrous sentences passed on Oleg Sentsov, Oleksandr Kolchenko and two other opponents of Russia’s annexation of Crimea (Gennady Afanasyev and Oleksiy Chyrniy) is one such case.

There was no evidence at all of Sentsov’s involvement in anything, only the testimony of two men while they were held incommunicado, without lawyers, and for which they received minimum sentences.  Chyrniy refused to testify in court where he would face cross-examination, while Afanasyev risked reprisals by retracting his testimony in court.  Afanasyev’s account of the torture he was subjected to corresponded with those of both Sentsov and Kolchenko.

There is quite simply no possibility that the Rostov Military Court ‘judges’ who sentenced Sentsov to 20 years, Kolchenko to 10 believed that the men were guilty of ‘terrorism’ charges.  It is equally impossible to believe that journalists who carefully edit out or distort the mass of evidence of Sentsov’s innocence are unaware of the lie that they are perpetuating and its human cost.

Oleg Sentsov has now been on hunger strike for 133 days.  His life is in the balance and there are levers that western countries could use to ensure his release and that of around 70 Ukrainians whom Russia is illegally holding prisoner  (details and addresses for Sentsov and Kolchenko here).