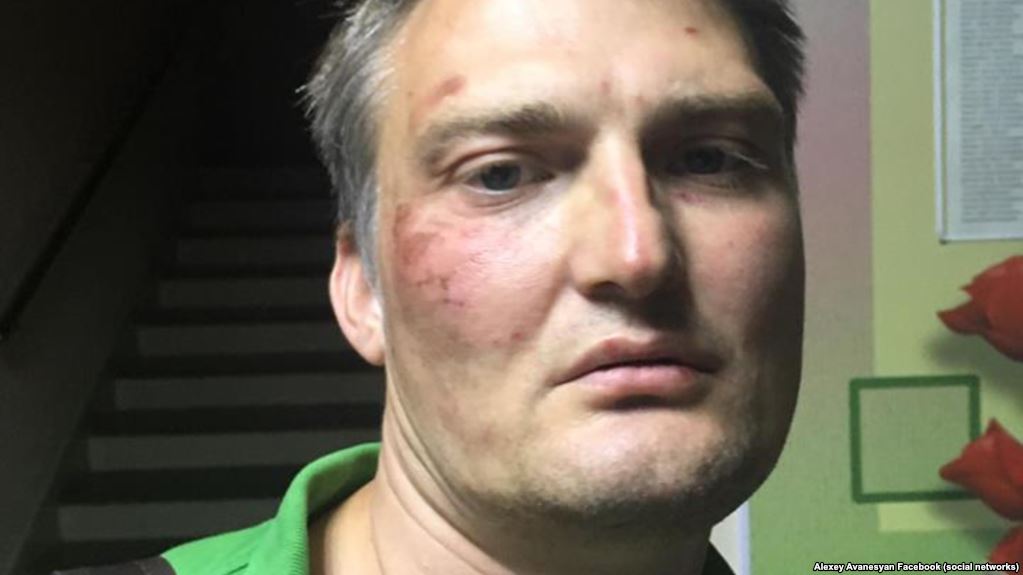 A Russian lawyer defending victims of repression is facing a potentially long prison sentence on openly fabricated criminal charges, with this setting a terrifying precedent for other lawyers both in Russia and in occupied Crimea.

Lawyer Mikhail Benyash was due to be released on 23 September after being seized by the police and beaten as he set off to help those detained in the September 9 protests against pension reform, and then jailed for 14 days.  Instead, he remained in custody with Russia’s Investigative Committee announcing criminal charges against him of having used physical violence against the police and of obstructing a judge.  The new version of events clashes both with that given by the lawyer himself, and that given to justify the initial administrative charges.  This criminal prosecution is a shockingly cynical move given the video footage clearly showing Benyash being forced into a car by two officers, and then later obviously battered and bruised after the police had refused to allow his lawyer to be present.

As reported, Benyash had gone to the centre of Krasnodar on 9 September, planning to represent participants in a peaceful demonstration, very many of whom were detained that day.

The 41-year-old lawyer from Sochi was doubtless known to the police as somebody who has defended victims of arbitrary detention on other occasions.  On 8 September, he had been warned by enforcement officers that he would be imprisoned for 15 days if he tried to defend the protesters.  His response to this was to lodge complaints about such illegal police behaviour with both Russia’s Investigative Committee and the prosecutor’s office.

It was an hour after lodging those complaints that two men in plain clothes seized him  in the centre of Krasnodar.  They gave no explanation for this ‘detention’, and when he tried to phone and tell people that he’d either been abducted or arrested, they sought to grab it from him.  He resisted, and one of the men, variously called Ivan or Dmitry first twisted his arm, and then tried to suffocate him.

One of the witnesses to this detention / abduction, Irina Barkhatova, began videoing what was happening, at which point she was also grabbed and forced into the car, with her phone taken away.  She was held in custody for 24 hours which was also illegal as she has a child under 14, and then fined  500 roubles.

Both Benyash and Barkhatova were handcuffed and Benyash said, when finally able to see his lawyer, that he had been hurled onto the pavement head first, before being taken in that position upstairs.  He asserted that despite repeated demands, not one of the men had identified themselves as officers. Taken into one of the offices, one of the men inflicted several blows to the head, and also pushed him down on the floor. He was clearly beaten badly enough for them to need to call an ambulance, seemingly the first of at least three occasions over the next 24 hours.

It should be stressed that Benyash’s appearance gave weight to his allegations, as did the fact that his lawyer Alexei Avanesyan was prevented from seeing him for around seven hours.

Administrative charges were then brought against Benyash under Article 19.3 (not obeying the lawful demands of a police officer) and 20.2 of the code of administrative offences (infringing the rules for holding a public event).

It was claimed that he had ‘agreed’ to go to the police station, but that on their arrival, in the parking area, he had begun inflicting injuries upon himself and hitting his head against the car window.  He was then alleged to have tried to run away and “in response to repeated lawful demands that he stop his hooligan activities, he had answered with a rude refusal and tried to provoke a fight with police officers.”  It was then claimed that he had been handcuffed to prevent him from doing physical damage to himself and others and that physical force had been applied because of his uncontrolled behaviour.

This was obvious nonsense, yet Benyash was jailed for 14 days, prompting a strong statement of protest from colleagues, condemnation from the Russian Federal Chamber of Lawyers and an urgent action from Amnesty International which declared him a prisoner of conscience who had been targeted in connection with his human rights work representing victims of police abused during a peaceful demonstration.

The version presented by the Krasnodar Investigative Committee on 24 September stretches credibility to breaking point.  It is claimed that on 6 September, “in monitoring the Internet, the police found that the lawyer had called on people to take part in an unauthorized demonstration, and that they had written a report and initiated administrative proceedings over this.  Then on 9 September, two criminal investigation officers had “noticed” him on Lenin St, provided an explanation and shown their ID, before asking him to go with him to the police.

“The man got into their car where, along the way, he used violence against the police officers, seizing and biting the arm of one of them, and inflicting no less than three blows with the elbow to the face of the other”.

He faces charges over this story under Article 318 § 1 of Russia’s Criminal Code, with this carrying a sentence of from two to five years’ imprisonment.

The second charge is over alleged behaviour back on 6 May 2018 at the Pyervomaisk District Court where Benyash’s client was facing administrative charges.  Benyash supposedly “repeatedly interrupted, gave instructions, expressed demands and objections against the rulings of the judge” and was eventually ordered to leave.  This he refused to do, and was removed by force.  He is then accused of having tried to ‘obstruct justice’ by returning to the courtroom.

His defence of his client’s interests has thus been qualified as ‘obstruction of justice’ and turned into criminal charges under Article 294  § 1 of the Criminal Code, with this punishable by up to two years’ imprisonment.

Benyash is due to appear in court on Tuesday for a preventive measure to be imposed.

This is a new and very disturbing development, one that is doubtless aimed at sending a clear message to other lawyers of what they can expect for carrying out their professional duty.