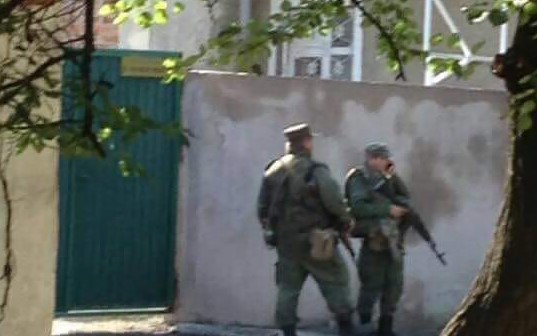 A group of armed militants from the self-proclaimed ‘Luhansk people’s republic’ [LPR] have seized an Evangelical Baptist House of Prayer in Brianka and driven out the believers, turning the whole place upside down.  According to the Ukrainian Union of Evangelical Baptist Christians, these representatives of the Russian-backed ‘republic’ left only after it was made clear to them that the building was the private property of one of the believers.

Petro Dudnyk, Pastor of the Good News Evangelical Church in Sloviansk and a tireless volunteer from the beginning of the military conflict, reports that  the Church in Brianka handed out water and food to hundreds of people in need during the most critical times during the past four years.  He says that the Church has continued up till now to take in and provide refuge to all those in need, regardless of their religious affiliation and ethnic origin.

This is not the first such armed raid and / or seizure of churches in areas until Kremlin-backed militant control.  On 6 July this year, Alexander Moseychuk, Pastor of the New Life Church in Makiyivka reported that seven representatives of the so-called ‘Donetsk people’s republic’ [DPR], some of them armed had burst into the church, announced that it no longer belonged to  and announced that it was being taken over.   There are around 120 believers whose church has been taken from them.  Pastor Alexander also stressed that the New Life Church had helped over 700 people in need since the beginning of the war.   According to the Institute for Religious Freedom, there were similar moves on 10 June in Donetsk, with the Church of the Holy Spirit in Donetsk, which is under the Ukrainian Orthodox Church of the Kyiv Patriarchate, forcibly closed by people from the so-called ‘DPR state property fund’.  On 27 March 2018, men in military gear turned up at a Baptist place of worship in Stakhanov [within ‘LPR’], forced their way into the premises and took out everything, including furniture and items used during services.

The situation varies somewhat in the two Kremlin-controlled ‘republics’, however both demonstrate the same basic intolerance for all faiths, except the Orthodox Church under the Moscow Patriarchate.

Since an ‘expert assessment’ is required in order to obtain such ‘re-registration’, it is likely that this will be used as an opportunity to ban some churches.  As was to be expected after the past four years, the Orthodox Church under the Moscow Patriarchate will not have to go through any of this, and will instead have a simplified ‘legalization’ process.

The supposed ‘Russian World’, which the militants see themselves as defending, has been endorsed by the head of the Russian Orthodox Church Patriarch Kirill (more details here).

It is quite likely that the situation will deteriorate further following the aggressive reaction shown by the Moscow Patriarchate and Russia to the decision by the Universal Patriarchate in Constantinople to grant autocephaly to the Ukrainian Orthodox Church under the Kyiv Patriarchate.