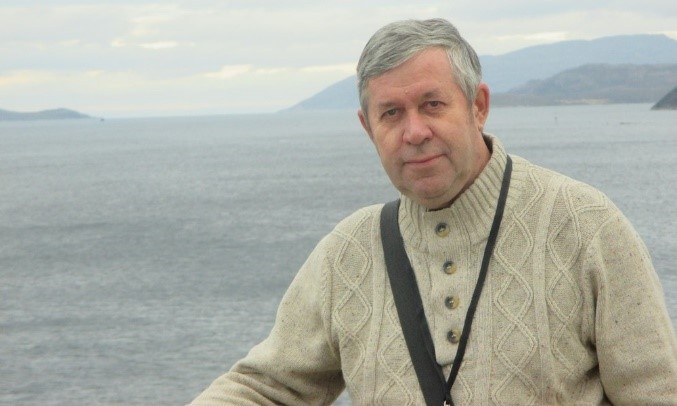 Scroll down for an update following the court hearing

It is becoming dangerous in Russia to investigate the crimes of Stalinism.  A second Karelian historian, Sergei Koltyrin has been arrested and is facing charges almost identical to those now brought against political prisoner, Yuri Dmitriev.  While the possibility cannot be excluded that there are real grounds for these new charges, the chilling similarities between the two cases are of immense concern.  So too is the timing, with this second arrest coming soon after Koltyrin publicly rejected attempts to rewrite history about the mass graves of victims of the Terror at Sandarmokh in Karelia.

The Investigative Committee report initially stated only that “two men are suspected of depraved actions committed to a minor” (Article 135 § 4 of Russia’s Criminal Code) and that these actions had allegedly been committed in September 2018.  While on their site neither man is named, it is ominous that local media have as yet not identified the second person who, the Investigative Committee now asserts, has admitted to committing the acts.

The charges against Dmitriev have run up against insurmountable problems because of lack of evidence and the historian’s own denial of all the charges.  Anybody following the cases of Russia’s Ukrainian political prisoners will be well aware of how many hinged solely on ‘confessions’ obtained while the men were held incommunicado and through torture.

Koltyrin has been the Director of the Medvezhyegorsk District Museum since 1991.  His museum covers Sandarmokh, the clearing in Karelia where Dmitriev and other members of the Karelia branch of Memorial uncovered the mass graves of victims of the Terror.  Among those buried at Sandarmokh were 1,111 prisoners of the notorious Solovki Labour Camp, including 289 Ukrainian writers, playwrights, scientists and other members of the intelligentsia, killed by quota from 27 October to 4 November 1937.

Koltyrin always worked very closely with Dmitriev and the Memorial researchers.  The work at Sandarmokh, and its significance as a place of pilgrimage where each year International Days of Remembrance of the Victims of the Great Terror were held, were initially fully supported by the Karelia authorities and even the FSB [security service].

Under President Vladimir Putin, the attitude to Joseph Stalin and to the darkest pages of Soviet history has changed dramatically.  Over the last two years, no representatives of the authorities have taken part in remembrance events, and in August this year, Koltyrin himself was prevented from attending.

Koltyrin’s arrest comes just over a month after he made his opposition quite clear to contentious excavations by Russia’s Military History Society. This body was created by Russian President Vladimir Putin in December 2012, in order to “consolidate the forces of state and society in the study of Russia’s military-historical past and counter efforts to distort it”.  It is headed by Russia’s Minister of Culture Vladimir Medinsky, and has initiated such controversial moves as the creation of a museum and bust of Stalin in Khoroshevo (Tver oblast).

The excavations arose, purportedly, as a result of assertions made by two two historians from Petrozavodsk State University – Yuri Kilin and Sergei Verigin – six months in June 2016, six months before Dmitriev was first arrested.

They asserted that Sandarmokh could contain the graves of Soviet prisoners of war held in Finnish concentration camps and then killed during the Second World War.  There was enthusiasm for such suggestions from pro-Kremlin media, with Izvestia immediately asserting that “Memorial’s information about repression in Karelia may be revised”  Despite pleas from the descendants of those buried at Sandarmokh and the lack of any real evidence to justify such excavations, the work began on August 25 (more details here)

It was already difficult to separate these moves to rewrite history of Sandarmokh from the fatally flawed persecution of the man so instrumental in finding the graves and exposing the truth about both the victims and the perpetrators of those crimes.

It was almost certainly hoped that the case, which apparently involved ‘child pornography’, would turn people away from Dmitriev and also discredit Memorial.  It did nothing of the kind.  The defence brought in proper experts, as opposed to the mathematician, teacher and art historian who obligingly perceived ‘pornography’ in nine of over 100 photos.  They dismissed the allegations outright, finding no whiff of ‘pornography’ and confirming that it was common practice to take such photos for monitoring development.

It is possible that whoever had commissioned this prosecution decided to back off briefly in the face of such damning expert assessments and with worldwide publicity for the case.  On 5 April 2018, Dmitriev was acquitted of the ‘pornography’ charges, however this acquittal was overturned on 14 June, and the case sent back for ‘retrial’.

The aim was clearly to imprison Dmitriev and on 27 June he was re-arrested, with the ‘investigators’ adding the charge of ‘violent acts of a sexual nature’.  These alleged some kind of behaviour towards his adopted daughter up to when he was first arrested, but that had allegedly not been noticed before.  It seems likely that the new charges have arisen in cooperation with Natasha’s grandmother who had not seen the little girl after leaving her in a children’s home as a toddler.  Certainly Natasha herself was writing obviously loving letters to her father in prison and was clearly devastated by being taken from the only family she had ever known.  Most importantly, in over a year and a half of trying to make an absurd prosecution convincing, the ‘investigators’ had come up with no other charges involving the little girl.  Dmitriev remains in custody  (more details here)

It was evident from within a month of Dmitriev’s first arrest that the case was aimed at discrediting Memorial and that this had been coordinated with the FSB.  The charges had been chosen very deliberately to seem quite apolitical, while arousing aversion and anger, with many simply assuming that there must be some truth to them.  That calculation has probably been made again.  The arrest of Koltyrin soon after he rejected attempts to doctor the past with respect to Sandarmokh seems suspect, and concern is only exacerbated by attempts already reported in local media to link and discredit both highly respected and committed historians.

Update:  On 3 October, Sergei Koltyrin and Yevgeny Nosov were remanded in custody until 27 November.  The charges concern a 13-year-old.  Interfax has asserted, citing an unnamed source, that Koltyrin has written a confession. As with all proceedings against Dmitriev, the prosecution is able to hold them behind closed doors because of the age of the alleged victim.  Viktor Anufriev, who has represented Dmitriev from the beginning, will be representing Koltyrin as well.  There appears to be no information about Nosov, except that he does not appear to have a lawyer.