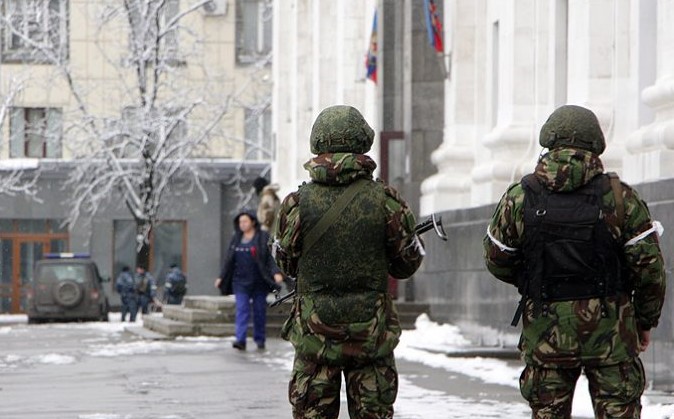 The self-proclaimed ‘Luhansk people’s republic’ has refused to ‘re-register’ all communities of Baptist, Pentecostal, Seventh Day Adventist and other Protestant churches, with this meaning that believers could face fines or arrest merely for prayer gatherings in private homes  Such a blanket refusal suggests that this was always the Russian-backed militants’ aim in introducing a system of ‘re-registration’.  Maksym Vasin, Director of the Institute for Religious Freedom [IRF], suspects that the information gathered about Evangelical communities and their members may be used for further religious persecution.

IRF has learned from a number of communities that all Evangelical Christian communities have been refused the so-called re-registration, with this meaning a total ban on any group religious activities on territory under the militants’ control.   One of the communities in the Luhansk oblast told IRF that they have been told that their premises no longer belong to them.

As reported earlier, a ‘law’ from February 2018 obliged all religious communities under ‘LPR’ control to undergo the so-called re-registration within the next six months, with this later extended until 15 October.  The procedure proposed included getting a supposedly ‘expert assessment’, with the latter now cited, seemingly without real explanation, as excuse for rejecting the applications.

This same ‘law’ effectively placed in question the continued activities of churches of the Ukrainian Orthodox Church of the Kyiv Patriarchate.  The Moscow Patriarchate’s (and Moscow’s) extremely hostile reaction to the Ecumenical Patriarchate of Constantinople’s endorsement for an autocephalic Ukrainian Orthodox Church last week is also likely to exacerbate the difficulties, or downright persecution, that any believers of churches under the Kyiv Patriarchate face in occupied territory – whether in ‘LPR’, the self-proclaimed ‘Donetsk people’s republic’ or in occupied Crimea.

Religious persecution is nothing new in the Russian-controlled ‘republics’.  On 26 September this year, armed ‘LPR’ militants seized an Evangelical Baptist House of Prayer in Brianka and drove out the believers, turning the whole place upside down.  They left only after it was made clear to them that the building was the private property of one of the believers.

The situation varies somewhat in the two Kremlin-controlled ‘republics’, however both demonstrate the same basic intolerance for all faiths, except the Orthodox Church under the Moscow Patriarchate.  ‘DPR’ is also demanding ‘re-registration’, with the only difference being that religious communities have been given until 1 March 2019.

As was to be expected, the Orthodox Church under the Moscow Patriarchate will not have to go through any of this, and will instead have a simplified ‘legalization’ process.