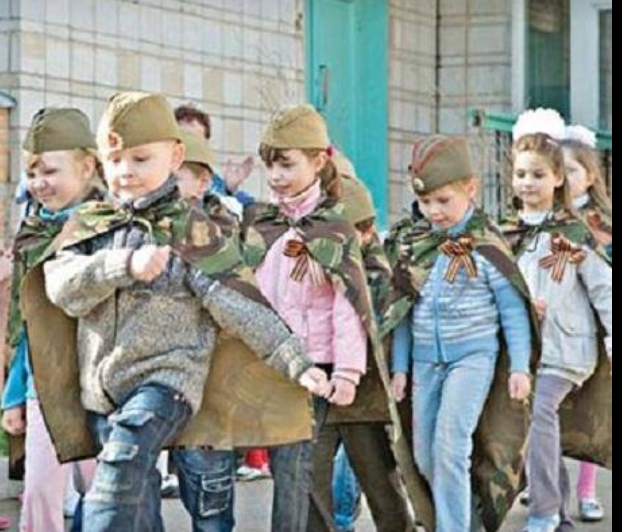 Russian President Vladimir Putin has claimed that the attack on Kerch Technical College, and the deaths by now of 21 people, most of them teenagers, was the result of ‘globalization’ and failure everywhere to properly react to changing conditions in the world.  It is a convenient line to take, as it places the responsibility outside Russia and his regime, while justifying further state intervention to provide the allegedly missing “necessary, interesting and useful content for young people”.   It is not a view shared by many people who have watched with concern the mounting militarization of Crimean society in general, and children in particular, under Russian occupation.  While we do not know, and perhaps never will, what went on in the head of 18-year-old Vladislav Roslyakov before he went on his killing rampage, the atmosphere in Crimea and the attitude to war and weapons have certainly changed alarmingly since Russia’s invasion and annexation in early 2014.

Well-known Crimean Tatar journalist and initiator of the civic initiative Bizim Balalar [Our Children] which provides help to the children of Crimean political prisoners, wrote a comment about the tragedy, accompanied by real photos of children being taught to use weapons, wearing military uniforms and taking part in militarized stage performances.  She writes:

“In my subjective opinion, what happened in Kerch is the result of the total militarization of children’s consciousness which has been inculcated in Crimea over recent years. All of these exhibitions of military technology on the central squares of cities where children are put on anti-aircraft guns and taught how to use a machine gun; these ‘patriotic’ children’s photo sessions with weapons in their arms; all these children’s militarized relays and parades under army patronage. You wonder what is in the minds of the people who give children ‘toys’ to hold that are designed to kill”

The Crimean Human Rights Group and other NGOs have long warned of dangerous levels of war propaganda and the deliberate militarization of public awareness. Children are particularly targeted in the campaign of disinformation, aimed at stirring up enmity towards Ukraine and glorifying war in Crimean schools. There has been mounting focus on so-called ‘military – patriotic’ education in Russian since Vladimir Putin came to power, with Russia now aggressively and illegally trying to foist this on occupied Crimea.  The so-called ‘military-patriotic’ education involves wearing military uniform and learning how to use firearms.  The idea is inculcated of victory in war with the help of armed conflict.  The Crimean Human Rights Group has repeatedly warned that such activities are aimed at legitimizing Russia’s occupation of Crimea and the brutal, sometimes murderous, activities of the armed paramilitaries who worked together with Russian soldiers to secure control of the peninsula.  It is also part of Russia’s attempts to push conscription and serving in the occupiers’ army.  Almost exactly one year before the massacre, Russia’s recruitment campaign in Kerch was accompanied by an exhibition of military technology, with children encouraged to play on tanks, etc.

There is aggressive glorification of the Second World War, and war generally, with a fashion emerging over the last two years for children’s ‘military parades’ and uniforms even for infants.

Extreme intolerance is demonstrated against those who express unease or horror at such ‘celebration’ of war.  Crimean Tatar poet Aliye Kenzhalieva recently faced possible criminal charges over poems about the tragedy of war.  The Russian-controlled Investigative Committee seemed set to claim that the poems fell under the article of Russia’s criminal code on ‘rehabilitation of Nazism’.

Kenzhalieva’s poem was published on 9 May in the local paper Qirim, and spoke of how war is about sorrow and tragedy in the first instance and not pathos and a festive holiday, as has become the case under Russian occupation.  She wrote:

“Death is not a reason for a festive day”.  … “They teach [people] to love war / To not remember tragedy, / To not pray for the souls of the unfortunates / to not preserve this fragile peace.

They teach [people] to love war, / To be happy that it took place, / To wear military uniform / To be proud in song and dance, / To organize a holiday……

The Investigative Committee eventually decided not to press charges, probably because of the widespread concern expressed over such potential persecution for poems against war in general, which even for Russian prosecutors might have made for a problematic indictment.

Serhiy Danylov, from the Kyiv-based Centre for Middle Eastern Studies, who has been closely following events in Crimea for many years, believes that the attack was the result of the general atmosphere in Crimea and in Russia.

“Crimea is a particular region.  There is currently a concentration of hatred, of ideas about how there are enemies all around and that everything can be resolved using weapons”.  He sees a second cause as being the mounting bullying in schools, with the latter, of course, not confined only to Crimea.

Why is talking about religion in your kitchen ‘terrorism’, but killing en masse?

As reported, Russia changed the initial criminal proceedings from terrorism to multiple homicide soon after it became clear that Roslyakov was not a Crimean Tatar and that there was nothing to suggest that the Ukrainian enforcement bodies had been involved in the killing.

Well-known human rights lawyer Emil Kurbedinov has expressed his and colleagues’ sorrow and deep sympathy for the families of the victims of Wednesday’s massacre, but speaks also of their incomprehension at the actions of the Russian state.  Since soon after annexation, Russia has been persecuting Ukrainians, especially Crimean Tatars and other Crimean Muslims, on totally spurious ‘terrorism’ charges.

The FSB has large contingents of staff working on such ‘terrorism’ cases where, for example, devout men who have never committed any crime, are arrested in major operations involving armed searches and accused of ‘involvement’ in Hizb ut-Tahrir, a peaceful organization not known to have committed any act of terrorism anywhere in the world, and legal in Ukraine.

Units of 16 ‘investigators’ are deployed to ensure illicit tapes of innocuous conversations about religion which get turned into ‘proof’ that the men are members of Hizb ut-Tahrir, although there was no such proof.

Abductions and torture are used to try to get other Muslims to testify against men, and where that doesn’t work, there are ‘secret witnesses’.  Since even the voices of such ‘witnesses’ are distorted, it is quite likely that one FSB officer can testify as more than one supposed ‘witness’.  All such ‘testimony’ is aimed at ‘proving’ that men who have never hurt anybody were ‘involved’ in a peaceful non-violent organization.

Amid all such ‘anti-terrorist’ work, an 18-year-old student was able to find a suspiciously large amount of money and buy a hunting rifle and carry out an obviously planned attack on the college, with all Russian enforcement bodies caught quite unaware.