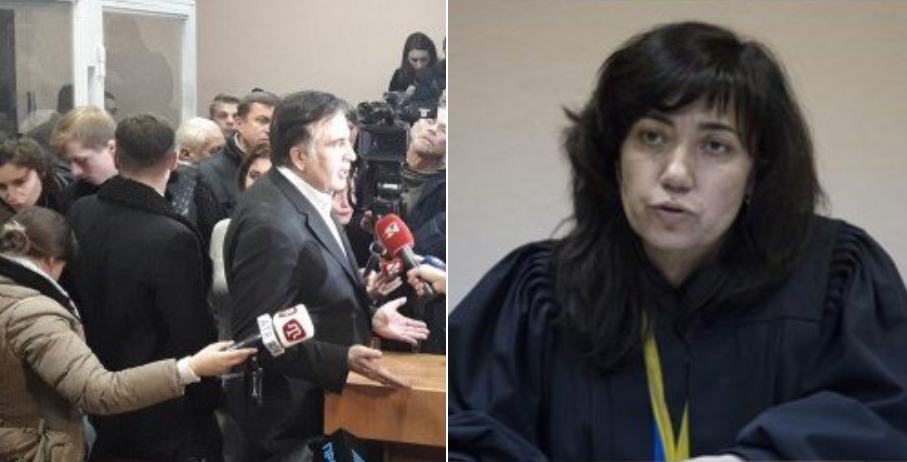 The High Council of Justice [HCJ] has suspended Larisa Tsokol from serving as a judge pending a decision as to whether she should be dismissed from her post.  While the proceedings are purportedly quite unrelated to the judge’s decision regarding former Georgian President and Ukrainian opposition politician Mikheil Saakashvili, their timing must inevitably arouse suspicion, especially given the near total lack of consequences with respect to judges involved in the persecution of Euromaidan activists.  Doubts are still further exacerbated by the nature of one of the complaints against her.

Tsokol is a judge at the Pechersky District Court in Kyiv who has been involved in several high-profile cases over the years.  In November 2004, she revoked the decision to initiate criminal proceedings against Oleksiy Pukach, the former Police General now serving a life sentence for his role in the killing of Ukrainian journalist Georgy Gongadze.  Pukach immediately disappeared and was only arrested in 2008.

President Petro Poroshenko’s move in July 2017 to strip Saakashvili of his Ukrainian citizenship, and then later the attempts to prosecute him, earned Ukraine a great deal of negative publicity, with the steps fairly widely believed to be aimed at eliminating a political critic and possible rival to Poroshenko.  Such suspicions were only fuelled by the scepticism which several legal experts expressed regarding the dubious or legally contentious charges against Saakashvili (details here).

The High Council of Justice then announced on 22 December 2017 that its First Disciplinary Chamber had initiated disciplinary proceedings against Judge Tsokol.  It claimed that this had nothing to do with the ruling about Saakashvili, and that it was linked with a complaint received in March 2017 from A. Pikalov.

Other, rather disturbing, proceedings were initiated on 30 July 2018 by the Second Disciplinary Chamber.  They arise from a complaint lodged by Anton Yanchuk, Deputy Minister of Justice regarding European Integration Issues on 23 June 2015, with this complaint apparently only sent to HCJ by the High Qualification Commission of Judges of Ukraine on 25 April 2018.

The problems with this complain are not only linked with the timing, but with the substance of the allegations against Tsokol.  They are all the more worrying as the ruling that Yanchuk challenged was, in fact, upheld by the Kyiv Court of Appeal on May 17, 2016.

Tsokol allowed the application, ordering that Ukraine enforce this interim award.  As mentioned, that ruling was considered and found to be correct by the Kyiv Court of Appeal on May 17, 2016.

The arbitration proceedings do not appear to have been concluded, however there was, reportedly, another ruling from the same Kyiv Court of Appeal on 21 December 2016.  On that occasion, the Justice Ministry got their way, and the court ruled that the interim arbitral award should not be enforced.

The Deputy Justice Minister's complaint against Tsokol was lodged almost immediately after the court hearing and, therefore, approximately a year before the Kyiv Court of Appeal found nothing wrong with Tsokol's ruling..

The Deputy Justice Minister had asserted that Tsokol’s ruling was “unwarranted and that enforcement of the ruling would infringe Ukraine’s public order and would threaten its interests, and lead to losses to the state budget” of almost 600 million UAH.  Such arguments sound eerily similar to those presented in the criminal charges under President Victor Yanukovych against Yulia Tymoshenko.

He claimed that Tsokol had deliberately flouted her duties, infringed norms of the law and deliberately passed a ruling in the interests of the plaintiffs.

This complaint was, three years later, given a preliminary check by I. Artemenko from the Second Disciplinary Chamber who found that there were grounds for initiating disciplinary proceedings against the judge.  No mention is made of the three Court of Appeal judges who had, on 17 May 2016, upheld Tsokol’s ruling.

Why only Tsokol has been targeted is just one of many questions that this suspension of a judge raises.