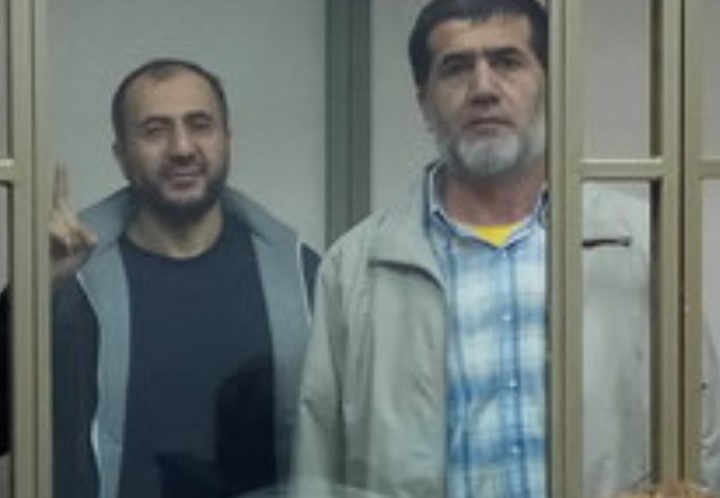 A Russian court in Rostov on the Don has sentenced two men to 15 and 13 years’ imprisonment, effectively for sharing information about their beliefs in occupied Sevastopol,   Akramdzhon Abdullaev and Nematdzhon Isroilov are the latest victims of Russia’s persecution on occupied territory of Muslims for alleged involvement in the peaceful Hizb ut-Tahrir movement which is legal in Ukraine. Typically the same ‘secret witness’ as in the earlier trial of Ruslan Zeytullaev and three other Crimean Tatar political prisoners from Sevastopol was deployed in this case also.

42-year-old Abdullaev, an Uzbek by nationality and 50-year-old Tajik Isroilov are both citizens of Kyrgyzstan.  According to the Russian ‘investigators’, they arrived in Sevastopol as labour migrants after Russia’s annexation of Ukrainian Crimea.  They were arrested in August 2016 in Sevastopol and charged with ‘recruiting people and taking part in the Hizb ut-Tahrir movement’ from November 2014, with this treated as falling under Article 205.5 § 2 of Russia’s criminal code (involvement in a terrorist organization) and Article 205.1 § 1 (drawing others into a terrorist organization).

Russia’s Supreme Court declared the pan-Islamist Hizb ut-Tahrir ‘terrorist’ back in 2003, with the ruling kept secret until it was too late for the organization itself and human rights organizations to appeal.  Since then, Russian courts have regularly passed long sentences, up to life imprisonment, for supposed involvement in an organization which is not known to have committed any act of terrorism anywhere in the world.  The situation is particularly serious in Crimea which Russia is acknowledged by the International Criminal Court, the UN and all democratic countries to be illegally occupying.  As an occupying state, it has no right to apply its legislation and prosecute people for involvement in an organization which is legal in Ukraine.

As in all such cases, the activities which the Northern Caucuses District Military Court sentenced Abdullaev to 15 years and Isroilov to 13 for do not constitute a crime. The men are alleged to have “deliberately carried out covert anti-Russian, anti-constitutional activities, in the form of propaganda work among the public” aimed at the creation of a world-wide Islamic Khalifate.”

Both men rejected the charges, with Abdullaev adamant that the case was fabricated and that he was being persecuted for his religious beliefs.

The men were reportedly arrested on the basis of a denunciation from Adkham Ergashov, who died seven days after their arrest.  According to Russian journalist Anton Naumlyuk, an Imam from Yevpatoria, from the Muftiate under Emirali Ablaev gave testimony for the prosecution. Ablaev decided in late 2014 to collaborate with the Russian occupation regime and this is not the first time that he or people linked with him appear to have helped prosecute those viewed as ‘dissidents’.

The charges pertained solely to unproven involvement in Hizb ut-Tahrir, with the ‘case’ based almost entirely on a tape of a meeting arranged by an FSB provocateur, who was later a ‘secret witness’ at the ‘trial’ – as well, seemingly, at the trial of Abudllaev and Isroitov.  The individual asked deliberately provocative questions with this ‘kitchen conversation’ which he had secretly taped then used to convict the men.  It should be stressed that the questions were not about planned crimes, but about religious and political views.  The level of such ‘proof’ can be seen in the fact that the FSB’s ‘linguistic expert’ claimed that the men were members of Hizb ut-Tahrir on the basis of a word used, although this word, originally from Arabic, is common among Crimean Tatars.

Russia took a year before new arrests – of the human rights activist Emir-Usein Kuku and five other Ukrainian Muslims from the Yalta region in February and April 2016.  Since then the arrests have come more frequently, with those since October 2017 almost openly targeting civic activists involved in Crimean Solidarity, the initiative helping political prisoners and their families.

The renowned Memorial Human Rights Centre considers all those convicted of ‘terrorism’ merely on the basis of supposed involvement in Hizb ut-Tahrir to be political prisoners.  In declaring those Ukrainian Muslims prosecuted in the first three such Crimean cases political prisoners, Memorial has stressed that there are no grounds for the terrorism’ charges at all, and pointed out that the situation in Crimea is specific in that this is occupied territory on which Russia has no right to impose its legislation.  In its statement regarding four Crimean Tatars from Bakhchysarai: Enver Mamutov; Rustem Abiltarov; Zevri Abseitov and Remzi Memetov, Memorial HRC writes that: “In the four years since annexation, the Russian authorities have launched major persecution of members of Hizb ut-Tahrir in Crimea and Sevastopol.  The Russian enforcement officers  have targeted the historically non-loyal group - Crimean Tatars (with few exceptions, all those arrested on charges of involvement in Hizb ut-Tahrir are from this ethnic group).  Strengthening their power in the region is achieved both through arrests, and through dozens of searches of homes and mosques, interrogation of people living in the region.”