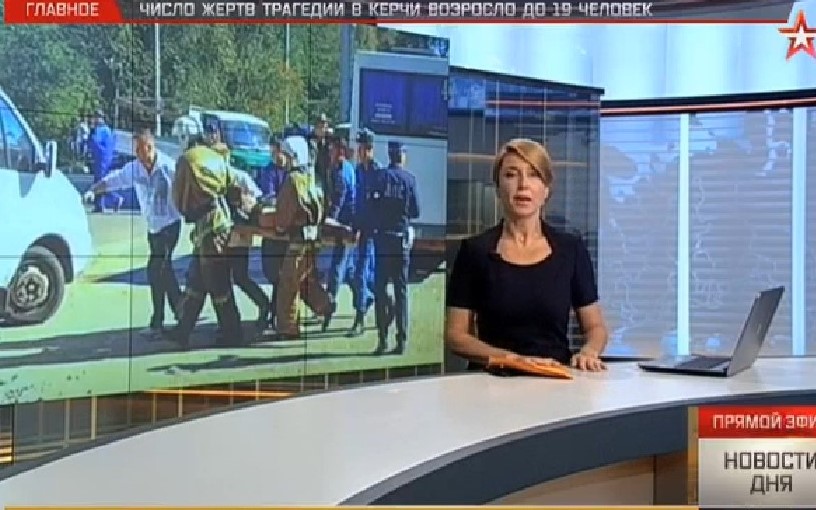 There seems no end to the uses that Russian state propaganda will make of the tragic mass killing in occupied Kerch on October 17.  After falsely claiming that the suspected killer “looked like a Tatar”,  Russian or Russian-controlled media continued to claim some kind of ‘Ukrainian link’ and even connect the massacre to ‘Right Sector’, the Ukrainian nationalist organization which Russia has demonized since early 2014. The latest target for what is essentially a hate campaign has become the Jehovah’s Witnesses, although here too any link is pure speculation.

One of the aims is doubtless to deflect attention from inconvenient subjects, such as the suspicion that the alleged killer did not act alone, and that he did not kill himself, as claimed.  There have also been questions about how the young man came to be in possession of such an expensive weapon and number of bullets, as well as social  media posts showing children in Kerch and other parts of occupied Crimea being shown how to use weapons, taking part in ‘Youth Army’ swearing-in ceremonies or simulations of military action.

The official version is that 18-year-old Vladislav Roslyakov, a fourth-year student at the Kerch Technical College, arrived at the college with a homemade explosive device and a hunting rifle which he used to kill 20 students and staff, before turning the gun on himself.  There is video footage showing Roslyakov carrying a rifle inside the school, so his involvement does not seem in dispute.

The Crimean Human Rights Group has drawn attention to Russian media reports trying to incite enmity towards the Jehovah’s Witnesses by claiming a connection between the mass shooting and Roslyakov’s background.  The allegations are based on claims, presented without any proof, that Roslyakov’s mother who was bringing him up by herself was a Jehovah’s Witness.  Whether or not his mother is, or has ever been a Jehovah’s Witness, there is no proof that Roslyakov had any religious beliefs, or that his mother’s alleged beliefs affected him in any way.

As CHRG notes, the entire ‘story’, as presented, for example, on the Russian state-controlled Vesti.ru, is based solely on value judgements which are presented as though they were facts.

The Vesti.ru report is entitled ‘The Kerch killer was surrounded by supporters of totalitarian sects’.  It claims that Roslyakov’s mother was a member of what the presenter calls ‘a sect’ stressing (as Russian law demands) that the Jehovah’s Witnesses are banned in Russia and that she “forced her son to live by the rules of the banned organization”.

It then asserts that people who “have pulled themselves away from it” are sending messages of sympathy to the bereaved families and claiming that “all that happened was the result of pseudo-religious upbringing’.

The supposed ‘expert on religious sects’, Alexander Dvorkin, makes allegations about the Jehovah’s Witnesses’ faith that are seriously questionable, as does the Russian Orthodox priest interviewed.  None of the claims are in any way checked or analysed, nor is the viewer offered anything in the way of an alternative point of view.

The Crimean Human Rights Group is surely correct in identifying all of this as hate speech, which can result in crimes being committed against the targets of attack.  The human rights activists have noted material inciting enmity towards the Jehovah’s Witnesses in at least 10 Crimean or Russian Internet publications, including media fully or partially financed with Russian state funding (Vesti.ru; NTV; TV  Zvezda and Russia Today)

It is, unfortunately, also possible that this could be used as a pretext for the same persecution of the Jehovah’s Witnesses in occupied Crimea as is now seen in Russia.  This world faith which is legal in Ukraine, as in all democratic countries, was banned by Russia’s Supreme Court on 20 April 2017, with the claim being made that it was ‘extremist’.  Not one example was provided where believers had breached public order, shown aggression or violence, or in any way threatened national security,  Despite the lack of any grounds, the appeal in July 2017 was rejected, and the ruling, which drags Russia back into the religious persecution of the Soviet era, came into force.

The persecution of believers has escalated this year and there are currently at least 50 believers in Russia facing persecution, with the majority in custody or under house arrest.

As reported, the ‘operations’ against the Witnesses, as well as many of the features of the prosecution are very similar to the tactics used by the FSB against Crimean Muslims.  These include gratuitously violent searches and arrests, highly questionable ‘secret witnesses’, illicit surveillance and ‘expert assessments’ by individuals or a centre notorious for providing precisely those ‘conclusions’ that the prosecution demands.

There have been a number of administrative prosecutions in occupied Crimea, and at least one young believer has been ordered to provide ‘proof of change of faith’ in order to be eligible for alternative civilian service.  Since Russia is violating international law by imposing military service on occupied territory, it is likely that young Jehovah’s Witnesses will soon be facing imprisonment for refusing to serve in the Russian army, just as was once the case in Soviet times. Since Russia is imprisoning Crimean Muslims on charges of alleged involvement in the Hizb ut-Tahrir movement which is not banned in Ukraine, it has long been clear that the fact that the Jehovah’s Witnesses are legal in Ukraine would not stop Russia from persecuting them on illegally annexed Ukrainian territory.   While it is to be hoped that the current hate campaign against the Jehovah’s Witnesses is simply a cynical attempt to find an easy ‘enemy’ to attack, worse under Russian occupation is near certain to come.